Justin Torres is Selected for “5 under 35”

Justin Torres is Selected for “5 under 35” 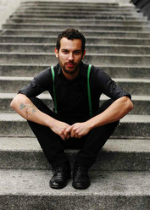 A congratulations is in order for 2007 Lambda Literary Fellow Justin Torres who has just been announced as an honoree for this year’s 5 Under 35—a National Book Foundation program which “honors five young fiction writers selected by past National Book Award Winners and Finalists.” Torres, a Stegner Fellow and graduate of the Iowa Writers’ Workshop, is the author of the best-selling novel We the Animals. The book has been described as “a novel so honest, poetic, and tough that it makes you reexamine what it means to love and hurt” (O, The Oprah Magazine).

The National Book Foundation will be celebrating Torres along with four other outstanding authors—Jennifer duBois, Stuart Nadler, Haley Tanner, and Claire Vaye Watkins—on the evening of Monday, November 12th at PowerHouse Arena in DUMBO, Brooklyn NY.

A Seventeen Magazine book review dated January, 1964 and written by a 13-year-old Eve Kosofky Sedgwick—who would later go on to be a prominent scholar and literary critic—has been discovered and is making its way across the interweb. Sedgwick is best known for her work in queer theory, “including a number of provocative—and often scandalous—readings of classic literary texts.”

And lastly, but certainly not least—a post in honor of Banned Books Week. City Lights Bookstore recruited film director/writer John Waters to read the “steamiest” passage from D.H. Lawrence’s banned book Lady Chatterly’s Lover. The novel was published in 1928 and being the “50 Shades of Grey of it’s time” was prosecuted for obscenity in several countries. Watch Mr. Water’s passionate reading of the once-censored content here.