The Inauguration of ‘Nepantla’ in Chicago

The Inauguration of ‘Nepantla’ in Chicago

On Thursday, September 4, Chicago celebrated the release of the first issue of Nepantla: A Journal Dedicated to Queer Poets of Color.

The event, which was co-sponsored by Lambda Literary, was held in the auditorium of the Poetry Foundation and consisted of readings by four queer poets from the greater Chicago area. Their readings were deeply personal and moving.The evening began with readings by Francisco Aragón and Ruben Quesada. Aragón read four poems in a soft, tranquil voice. His quiet reading style enhanced the impact of the structure of his poetry which consisted of layers of short phrases that, when juxtaposed, produced collages of images. The fluid style of the next reader, Ruben Quesada, brought with it visions of urban and rural landscapes. Some of his readings used visual representations in paintings to construct social and personal metaphors.

The reading by poet Ching-In Chen was more animated and physical. Ching-In Chen’s poems often contained multiple parts in which each part consisted of a single image that expanded upon those of earlier parts. For example, one part of a poem about alienation consisted of listing meanings of the word “from.” 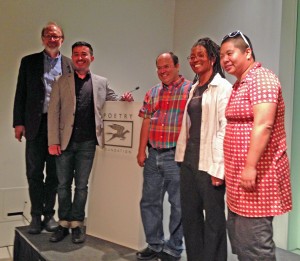 The final reader, poet Duriel E. Harris, evoked haunting visions of children surviving in a hostile world. Portions of her poems were chanted, including her concluding poem which flipped a racist children’s rhyme on its head. 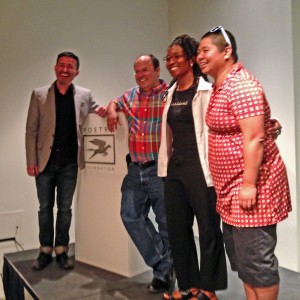 The event was well-received by the forty people in attendance who represented a broad spectrum of poetry lovers.