LOVE the poet: Haven’t you heard?

LOVE the poet: Haven’t you heard?

When Michelle Antoinette Nelson aka “LOVE the poet” spoke into the microphone—amidst a dense living room full of women gathered on the 3rd floor of a friend’s Bed-Stuy, Brooklyn apartment for The Revival—she owned that room. I knew I had to interview her. At 29, Nelson, who goes by the moniker LOVE the poet, both a noun and a command, has a bright literary future ahead. This month, LOVE is focused getting her “poetic memoir” Black Marks on White Paper into the shelves of major book stores (not an easy feat) before touring with the Punany Poets in February 2011 and then again with Jade Foster and The Revival in the spring.

1. Do you remember the first poem you ever wrote? What was it about?

Yes, it was about the day my sister and I went to live with my mother.  When my parents separated, my sister and I stayed with my father for about six months, but it was best for us to be with our mother so we decided to go live with her.  It was the saddest day because my father followed us as far as he could, walking behind the car… he was in tears. I will never forget that day… it was very difficult to deal with, so I wrote about it and it came out as a poem.

2. Wow! That’s a powerful answer. Let’s talk about your name: LOVE the poet. It’s both a noun and a full sentence—a command even. How did you adopt that name as your own?

Well first let me say, I absolutely love the way you worded this question…yes my name is all of that at once and that is why I added “the poet” after LOVE.  I acquired the name LOVE in college.  I used to host a poetry night in the residence hall because I was a Resident Assistant, and I would make the audience snap and say love after each performer (it was extremely cliché and I thought it was hilarious), and when I would walk across the yard people would snap at me and say “love” when they saw me.

So when I needed a stage name for a slam I was going to be in, a friend of mine suggested I use the name LOVE because everyone called me that anyway.

I later adapted a deeper meaning for my name and I wrote about it in a piece called “My Purpose.”

3. Can we talk a little about your poetic style? How do you describe your work to new readers or new audiences? Or, say, to the readers of Lambda Literary.

Well I am a performance poet, so I write a lot of confessional and narrative pieces. I write about my experiences and myself often because poetry has always been extremely therapeutic for me and I have found that the expression of what I have been through reaches and helps so many other people. Narrative poetry is a great challenge for me and I love to carefully craft a story utilizing poetry. 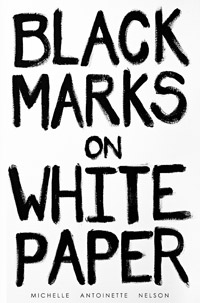 4. What do you think is the biggest misconception people have of you or your work?

5. Do you feel ignored by “mainstream gay” audiences? If so, how?

I didn’t know there was such thing as “mainstream gay” anything [laughs].

Poetry is not necessarily a genre that has a large “mainstream” market anyway so when dealing with an “alternative lifestyle” and a genre that people don’t know exactly how to market or how to embrace beyond the classroom or literary journals it is not easy to feel connected to the “mainstream.”

6. Or conversely, have major LGBT media outlets responded positively to you?

The major LGBT publications I have reached out to have been very supportive. Outloud magazine here in Baltimore featured me and placed me on the cover last year… and now Lambda Literary is being oh so kind to me.

I honestly believe that my work reaches many people and the more major exposure I receive the more major media outlets will be apt to positively respond to my work. 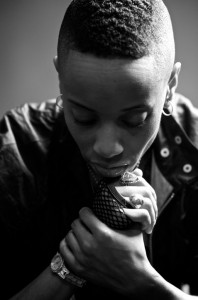 7. What can you tell us about your new collection, Black Marks on White Paper? Is there a general theme that runs through the book?

Black Marks on White Paper is a poetic memoir that deals with my experiences as a distinct contrast to the foundation of our western society.

I am black, gay, and a woman born in America and thus my work is a reflection of what I have seen and experienced as the complete opposite of what and who is deemed “the norm” in America.  Sometimes my perspective may be just as “normal” as anyone else’s or it could be completely to the left of the general consensus.

This book is divided into three distinct sections… the griot, the woman, and the warrior, and through narrative and confessional pieces I uncover the love, joy, and pain of others while dealing with my own personal triumphs and demons.

8. How do you respond to critics who say spoken word is not poetry?

To the critics I say this: Poetry is when one uses language to create a concentrated imaginative awareness and evoke emotion in the reader or the listener… and it does so whether written in strict forms, free flowing thoughts, or a blend of both. I believe that poetry is definitely evolving and changing and has been for decades.

We study our history and the poets that came before us but we also write in accordance with the time in order to maintain the relevance of our art form.   I personally look to poets of the past who took chances and pursued the art form their way regardless of the prescribed way of writing.

9. What is the hardest part of being a full-time artist?

The hours! I do not have the luxury of working 8 hours and going home to watch TV or to relax. I work around the clock. I am so passionate about poetry I had “poet.” tattooed into my right forearm a year ago…just to remind me of what I am supposed to be doing daily.

10. When I saw you perform at The Revival there was so much electricity in the room. Lots of sexual energy too. I assume women approach you all the time. What’s that like?

[Laughter] Yes actually they do approach me often.  It is a bit unreal to me… I am actually incredibly shy when it comes to approaching women so when women approach me I just play it as cool as possible, engage in conversation, but it doesn’t really go past that because hooking up with strangers isn’t really my thing. The attention is nice, though!

11. What’s the strangest/funniest pick up line you’ve heard on tour?

Last year a sister followed me from the hotel performance space to my room and asked me if I had a girlfriend.  I told her no and then she told me that I should have one… then she said I should have a woman in each city that I perform in and that she should be the one for that particular city. That was by far the most interesting offer I have had thus far.
12. What poets do you admire? Both spoken word performers and “literary” poets alike?

13. Is your family supportive of your work/talent?

Absolutely, my mother has always been in my corner when it comes to my writing and my father actually accompanies me with his guitar on certain gigs. They have really been a great support system especially since they realized that this is what I was born to do.

14. What’s your own biggest criticism of your work?

Right now my biggest criticism is that I haven’t been able memorize my work like I used to. 1 am writing faster than I can commit to memory but I guess that’s not so bad now that I have a book that I can read from!

15. Lambda has been criticized for not featuring more women or more people of color in general. How can we improve?

I think you all are already moving in the right direction! Featuring me is a great start, and going to more events like The Revival or talking to lesbian artists will ultimately lead you to an abundance of lesbians of color.