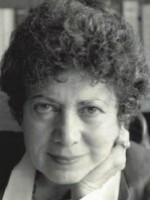 “Through most of my life I loved my mother very much, but I thought she was pathetic. Thinking deeply about her and writing about her has made me understand the ways in which she was truly heroic.”

Writing about your parents is never easy, but writing a book about your parents that ends as you are being born is a staggering challenge. Yet Lamdba Award winning author Lillian Faderman does just that to great success in her forthcoming book, My Mother’s Wars. The book, which Faderman says falls somewhere between an “imagined memoir” and “speculative biography,” details the doomed relationship between her mother Mary, a Jewish immigrant from Latvia, and Moishe, the father Faderman would only meet twice in her life. From their passionate beginnings to Moishe’s family’s rejection of Mary, to the abuse and multiple back room abortions that Moishe insists Mary have—Faderman paints the choices her mother makes to get out of the abusive relationship with great empathy and creates full characters out of the small pieces of stories she heard as a child. Faderman also skillfully weaves in the devastation of anti-Semitism in Europe as Mary struggles to save the rest of her family from the Hilter’s regime and bring them to the safety of the United States. A prequel in many ways to her 2003 memoir Naked in the Promised Land (Houghton Mifflin Harcourt, 2003), which describes Faderman’s own troubled childhood with Mary and her experience as a young lesbian in LA, My Mothers Wars is a painful, but expertly imagined read.

Faderman sat down with Lambda to discuss her inspiration for this project, the decades-long research process, and how this work led to the discovery of a half-sister.

My Mother’s Wars is coming out more than thirty years after your mother’s death. What made you finally feel ready to delve into your family’s history?

As the years went by after my mother’s death, I realized that though I knew so much about her, the most essential things in her history—the things that affected me deeply and that formed me—I really didn’t know, or I didn’t understand. For instance, why did she stay for so many years with a man who wouldn’t marry her and who wanted her to abort their babies (including me)? How and why did she finally have the courage to leave him so that I could be born? Why was she anguished to the point of psychotic episodes about the deaths of her brother and sisters in the Holocaust?—Did her terrible feelings of guilt about them, which I witnessed all through my childhood, have anything to do with the years she spent distracted by her tumultuous love affair with the man who fathered me?

When I was younger, I was too busy living my own life to take time out to reflect on hers. But in more recent years I felt, first, that I could finally allow myself the luxury of that reflection; and then, later, that it wasn’t a luxury at all: It was a necessity, because her struggles determined so much about who I would become, and I couldn’t fully understand myself unless I understood her.

As a writer, I was drawn to trying to understand her “out loud,” so to speak. I’m hoping that what I found in my attempts will be meaningful to others. I really think that though the particulars of people’s lives differ hugely, we share certain universals—like needing to come to terms with who our parents were and how that helped fashion who we are.

The historical detail in this book is so strong. You cite dozens of books in the resources section and mention traveling to Latvia to interview the mayor of the town your mother’s family lived in. What was the research process like for you?

When I began writing I didn’t know this would be a book that would require huge amounts of research. I just wanted to think about what my mother’s life had been, and to write about it in such a way that I and my readers could understand and feel what she must have felt. But I realized very soon that there was so much I didn’t know about the years before I was born. I couldn’t place her in her times until I found out, for instance, how a woman would terminate a pregnancy in the 1930s when abortion was illegal: How would you locate a doctor who’d be willing to perform an “illegal operation” as one 1935 newspaper account I read described abortion? What would you do if you couldn’t find a willing doctor?

My research also included finding out as much as I could about the man who fathered me. I knew little about him before. My research led me to a ship’s manifest that told me exactly when he arrived in America and with whom and how old he was and where he was born. (I then decided to find the manifest of the ship on which my mother arrived—and I discovered, to my astonishment, that she came to America in 1914, not in 1923 as I’d always believed; and that she was born in 1896, which made her ten years older than her lover. I think she was ashamed of that and perhaps that’s why she kept her age a closely-guarded secret). Once I had basic information about her lover/my father, I hired a private investigator to help me find more information. That’s how I discovered I had a half-sister, eleven years younger. We’re now very much in each other’s lives, and that’s been a great bonus of my writing the book. There’s a whole other book in that story.

I traveled to my mother’s shtetl—which is now a medium-sized Soviet-era city—long before I thought about writing My Mother’s Wars. (I was there in 1996, while I was writing I Begin My Life All Over, a book about the Hmong; and I describe my visit in the epilogue of that book, where I compare the fate of the Hmong with that of the European Jews.) In 1945, the Soviets, who drove the Nazis out, took eye-witness testimonies from people who saw the murder in July 1941 of the Jews of my mother’s shtetl. The testimonies are kept in the Preili city archives, and I was given a transcript (which I had to have translated, of course) by the man who was mayor in 1996 who was incredibly helpful and kind during my visit. The testimonies helped me create one of the scenes in the book that was about my mother’s youngest sister. My mother’s brother had been living in the big city of Riga when the Nazis invade Latvia. I knew before I began writing the book that he’d been killed in 1941; I relied on published research to create a scene of his end.

You say in the afterword of the book “memories of my mother and Aunt Ray provided the emotional truth” for this book. How much piecing together or filling in of narrative holes did you have to do when writing this memoir?

My mother and my aunt told me stories, and I also overheard things they said to each other about incidents and events before I was born. I knew so much in a general way; but I had to fill in specifics in order to write the book. For example, my mother told me that when she was young she loved to dance and was so good at it that people would stop on the dance floor and watch her. She said that when she first came to America she went to the dance halls on the Lower East Side of New York. But I don’t think she ever told me the names of the dances she did or what the dance halls looked like or what they were called. To create scenes about what her dance hall experiences might have been, I had to do research about popular dances and dance halls in the early decades of the twentieth century. I had to fill in a lot of the narrative holes.

I wouldn’t call My Mother’s Wars a “memoir”—the book ends with my birth, so I wasn’t an eyewitness to any of it. I’ve tried to reconstruct my mother’s life based on the stories I was told, the research that I did, and what I saw and felt from her while I was growing up.

Is there a genre you think your book falls into or does it go beyond genre? Is it a work that can’t really be categorized?

On the dust jacket the editor wrote that My Mother’s Wars is the memoir my mother might have written had she been able to. I suppose that classifies my book as an “imaginary memoir,” but that term doesn’t feel quite right. It’s a book about my mother in which I speculate, based on research and imagination, on what I don’t know for certain: a “speculative biography”? But “biography” doesn’t sufficiently suggest the techniques of “creative nonfiction” that I use–that is, setting scenes, creating dialogue, etc. I don’t think the book fits neatly into a named genre.

Your mother was a very sympathetic character despite her sometimes maddening choices. How were you able to write about her with such compassion? Did writing the book inform how you viewed your own relationship with her?

She did make some “maddening choices”; and I spent a lot of my young womanhood thinking that if I had become in any way strong it was because of her negative example. I would never do the foolish things she did, I told myself. But the years and a lot of reflection led to me understand that she was incredibly strong in ways I didn’t even consider earlier. What must it have been like to come to America by yourself at the age of seventeen, not speaking a word of English? What must it have been like to drag yourself to work in the garment factories for subsistence wages, to do that for much of your life—and to count yourself lucky that you even had a job? What must it have been like to decide to have a child out of wedlock in 1940, when unwed mothers were pariahs, and when you were already forty-three years old?

Through most of my life I loved my mother very much, but I thought she was pathetic. Thinking deeply about her and writing about her has made me understand the ways in which she was truly heroic.

‘Sister Spit: Writing, Rants and Reminiscence from the Road’ Hits Bookstores this September
'Happiness, Like Water' by Chinelo Okparanta
Literature at the End of the World

Amy Gall received her MFA in fiction from The New School in 2012. Her work has been published in The Frisky, Poets & Writers and is forthcoming in the anthology 'Queer Landscapes'. She is currently working on a novel about cryogenically frozen lesbians. You can read an excerpt from that and more at: http://writersbloq.com/amy-gall.