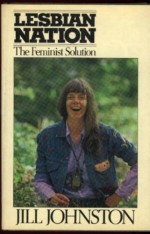 Our most adored and beloved Jilly, mother of Richard and Winnie, grandmother of Amanda and Ben, Lori and Marissa, my own darling love and best friend of 30 years, died today, September 18, 2010 at 1:40 PM.

She left us peacefully and with dignity; let’s honor her immense legacy of love, kindness and amazing intelligence by celebrating her life each and every moment in our own daily activities.

May her liberated spirit guide us on our paths.

From the Times obit:

In the early 1970s she began championing the cause of lesbian feminism, arguing in “Lesbian Nation” (1973) for a complete break with men and with male-dominated capitalist institutions. She defined female relations with the opposite sex as a form of collaboration.

“Once I understood the feminist doctrines, a lesbian separatist position seemed the commonsensical position, especially since, conveniently, I was an L-person,” she told The Gay and Lesbian Review in 2006. “Women wanted to remove their support from men, the ‘enemy’ in a movement for reform, power and self-determination.”

At a debate on feminism at Town Hall in Manhattan in 1971, with Germaine Greer, Diana Trilling and Jacqueline Ceballos of the National Organization for Women sharing the platform with Norman Mailer, the moderator, and with a good number of the New York intelligentsia in attendance, she caused one of the great scandals of the period.

After reciting a feminist-lesbian poetic manifesto and announcing that “all women are lesbians except those that don’t know it yet,” Ms. Johnston was joined onstage by two women. The three, all friends, began kissing and hugging ardently, upright at first but soon rolling on the floor.

Mailer, appalled, begged the women to stop. “Come on, Jill, be a lady,” he sputtered.