Imagining a World with Queer Royals and Representation

Imagining a World with Queer Royals and Representation 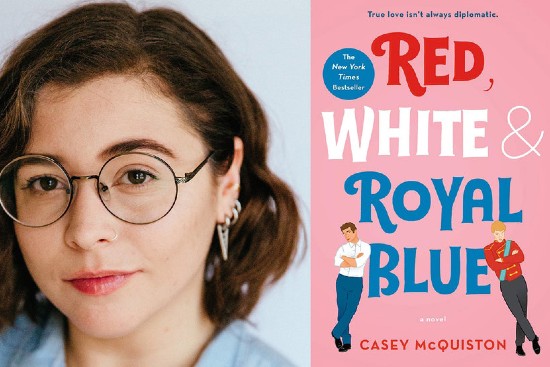 For this week’s roundup we dive into the imaginings of a queer royal relationship, we learn about the work young people are doing to advocate for queer representation in their literary books, and of course we are introduced to more emerging queer and trans writers taking the literary scene by storm.

Have you ever wondered what a queer romance between the President’s son and the Prince of Wales would look like? Well, we’ve got just the book for you. This past summer, Casey McQuinston released her new book Red, White & Royal Blue which examines sexuality and young love underneath the microscope of fame and politics.

Red, White, & Royal Blue weaves an amazing tale about the driven yet rebellious Alex Claremont-Diaz—the son of the first woman to become President of the United States in the fictionalized world of the book—and his strange lifelong vendetta against England’s Prince Henry of Wales. After a PR nightmare at the biggest social gathering of the year, Alex and Henry are forced to act like best friends for the public eye in order to salvage the reputations of both their families. Through this stunt, the two form an unlikely friendship, and fall in love with each other.

We’re so proud to see the young people of South Pasadena High School advocating for the inclusion of queer representation in their history books. Too often the experiences of queer and trans folks are swept under the rug. But it’s time for young people of all backgrounds to be educated on the incredible work done by the queer ancestors who came before us:

Teachers need to prioritize the needs of marginalized students in the community in order to uphold the values the City’s citizens preach. If SPHS implemented LGBTQ+ elements into literature or history, kids would be more accepting towards their queer peers. They would learn about the historical struggles of the queer community and how this impacts many other aspects of history and even parts of their own lives. When people are educated on past injustices, they can utilize the information learned to address today’s problems.

A couple of weeks ago we shared that a new Queer Literature Festival is coming to New Delhi, India! And in the spirit of uplifting the work of queer Indian artists, we were thrilled to find this showcasing of poet Aditya Tiwari’s first book April is Lush. In the book, Tiwari covers transness, womanhood, effeminacy and more.

“Favouring free-verse poetry, and (dare I say?) giving us a little bit of early-20th-century Imagism, Tiwari is candid throughout the book. This is an extremely personal collection of poems, and central to it is the experience of love and loss.” Read more.

We were super excited to learn that the folks at POPSUGAR recently released a list of 15 must-reads by trans and nonbinary authors!

From beautifully illustrated collections of poetry, compelling fiction novels, and scholarly historical accounts, this list has something any reader at any level can enjoy. We’ve included names of staple pioneering trans authors, as well as some fresh faces we hope to introduce you to.

Dig in and support these dynamic writers today!

Speaking of lists of great authors, we recently came across Buzzfeed News’ list of 15 Queer Books You Might Have Missed This Year. Inside, you’ll learn about new works from Staceyann Chin, Maia Kobabe, Nishta J. Mehra and more!

While some students are fighting to ensure that their queer heritage be included in their textbooks, others are now able to join a LGBTQ+ book club for teens. Now, the youth in Connecticut’s Groton Library may meet and talk about literature that reflects the vastness of their identities and we’re so excited about it! From the article:”Our group has been very conscientious of making sure every letter in the acronym has been represented in some way and that we do not focus in on one person’s story or one type of story.” Kudos to the kids!

For the lovers of Wizards of the Coast (WOTC) who were looking forward to a queer storyline featuring Chandra Nalaar, there might be hope after all! When Greg Weismann released War of the Spark: Forsaken, the newest addition to the WOTC franchise, he probably didn’t expect backlash from fans who expected him to explore the well-teased queer identity of main character Chandra Nalaar. And after hearing the outrage from his readers, Weismann and his publisher have decided to make some critical concessions:

Chandra will love and be involved with many characters as her story unfolds—regardless of gender. She will explore her relationships with fire and passion as she adventures across the multiverse. She is the character you’ve come to know and see yourself, your friends, and your family in over the past decade.

There you have it, folks. Raise your voice high enough and you too might see queer representation in your favorite fantasy novels as well!

'The Furthest City Light' by Jeanne Winer
'In the Dream House' by Carmen Maria Machado
Day Mattar, "The Big C"