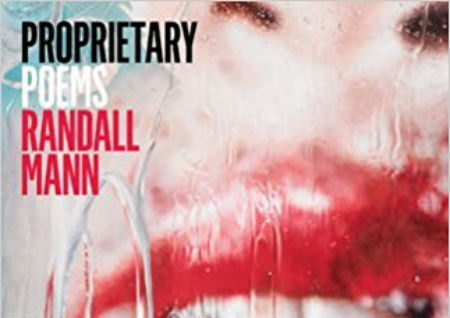 Born in 1972, Randall Mann came of age in the 1980s and 1990s. A poetic formalist who has close affinities with Thom Gunn, his breathtaking skill is every bit apparent in his latest collection of poems, Proprietary. This collection covers a range of themes and settings with an adept emphasis on the Reagan years up through the start of the Bush presidency.

Mann shows an agility in his work to capture the Zeitgeist of those times: the rise of corporate greed and corporate, globalist culture; gay cruising and desire in Florida and California, both pre-AIDS and during the height of the epidemic; and the Nan Goldin world of hardcore addiction and dereliction that attended its affluence. Having lived through this time in American life, Mann successfully evokes the cadences of the corporate workplace and the gay underworld with the ever sarcastic, defiled tone of the “starlet/ on a cruisy backlot” with a fine ear.

This sarcastic tone drips from the page, a smoldering anger, and a rage against the system, succinctly captured in his poem, “Black Box.” Here, he talks about his gay experience in the corporate workplace:

of politics or orientation:
I let them say, he’s a homosexual,
without an arch correction.
At a fondue buffet

in Zurich, our dumb-
founded senior group
director–when I let slip,
damn it, my trip

with a twenty-year old–inquired,
They’re always over seventeen,
right? I told her of course,
God yes, and, seething, smiled

In the book’s lead poem “Proprietary,” Mann draws from big-Pharma think-tank-speak in a jargon that is shocking in its clinical anomie. He begins:

In a precisely lighted room, the CFO speaks
of start-to-start dependencies.
Says let me loop back with you.

Says please cascade as appropriate.
It’s that time of morning;

I have worked
on a few preclinical reports in my time.
The rhesus monkeys become

so desperate that they attempt suicide,
over and over again. I am legally obligated
to spare you the particulars.

I manage in an office, but an office
that faces a hallway, not the bay. One day
I hope to see the bay that way. It all began

in the open, a cubicle–there’s movement.
My door is always open, even when I shut it.
I sit seven boxes below the CEO

Mann has artfully absorbed Thom Gunn’s style, down to the simplicity of his ballad stanzas, line lengths, his terse end-rhyme patterns, and his gay subject matter. A poem such as “Etiquette” embodies this sensibility and style:

We had no latex love to give,
in blighted, half-remembered scenes:
to hollow boys in acid jeans
who asked to lose their will to live.

Mann echoes Gunn’s sensibility toward hyper-masculine eroticism and rough trade, the world of bars and backrooms. Like Dennis Cooper’s work of the eighties and the visual iconography of Robert Mapplethorpe, Mann, in his poem “Flagging” draws upon this “down-market” world with its Tom of Finland imagery, its “leather-drag” and its S&M fetishism:

And then I end up south of Market,
in the hands of a loaded man.
A few queens lean on the bar, in a file
and in leather,
the requisite drag.
It feels like I’m in a foreign land:

Mann also channels Gunn in the poem  “Politics,” with its scene of gay male cruising in a gym:

and leans against the rack.
We study him like scholars.
As he removes his sweats,
I offer wadded dollars […]

Gunn is found again in the rough love lyrics of the poem “Translation”:

And then, as grisly as an accident,
comes love, what feels like love. Befalls
the best of us, as if the discontent
of days were not enough.

Mann keenly explores the eighties and nineties in America. Poems such as “Halston” present the designer as an icon of the eighties with his flashy, opulent life style. Once again, there is a betrayal by corporate interests, as Halston “signed away/ the rights to his name, for options.” Halston attempts to reclaim these rights from the conglomerate and realizes he has been duped and destroyed, pushed out of control of his own company. He resorts to drugs, contracts AIDS, and dies in 1990 in San Francisco. Mann writes at the end of the poem: “Just like that, the eighties were gone. / New York, New York, the eighties were no one.”

Pair this with the poem “That Dark Apartment” and you further get a vision of depravity and burn-out creeping at the corners of the decade. In “That Dark Apartment,” the poet’s “meth-loving ex” has succumbed to full-scale addiction and descended into a life of squalor:

On Wednesday, midday, it was freezing

but not for him; he came out of the den–
shirtless, hot, and blotchy–
when I summoned him. His pupils blown in the light.

“Young Republican” likewise captures the Zeitgeist of the eighties, showing Mann in middle school during a mock debate in which he actually takes the role of Ronald Reagan against a mock-Walter Mondale. The irony of this scene is humorously portrayed as Mann writes:

But teachers didn’t seem to care
that Ronald Reagan looked
a little fey, and had some flair.

By locale, Mann establishes himself as a West Coast poet. His poems move their way through the streets of San Francisco, Dolores Park, the Castro, to the Mission. There is a nostalgia for the heady days of a freely gay sexual underworld and its outlaw status, for the San Francisco of the Tenderloin district:

for the love of Pete.
The meat

lolls on its silver plate.
On Market Street,

a pool of vomit,
a pigeon’s meal.

Sonically, Mann is a master of formalist design with a witty sense for line-breaks. He is not one for an elliptical poetic. He represents perhaps the best in gay male poetry today, with a message of protest against corporate American life that is as relevant as it is timely. Mann’s work should be admired for its ferocity, its craft, and its unabashedly gay point of view.