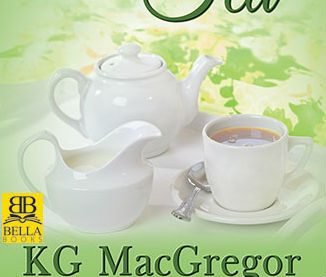 “Don’t forget–the milk always comes first.” That is Channing Hughes’ parting advice to Dr. Lark Latimer on making a “proper cuppa,” a term that can only mean tea to residents of the British Isles. The advice ends a rather bumpy first encounter for the leads of KG MacGregor’s new romance, A Proper Cuppa Tea.

Channing Hughes has been having a terribly horrid day. She is traveling from Boston, USA, to Cambridge, England, to settle her beloved grandfather Poppa’s estate. The task provides the cover for her to walk away from her job as a high-powered risk analyst and, more importantly, the tattered fallout from an office affair that has become intolerable.

Tall and beautiful, with auburn hair and blue-green eyes, Channing is a woman who turns heads. The downside of her looks is deftly illustrated by the frequent and unwanted attention from men. While waiting in the British Airways lounge for her flight, a very inebriated businessman’s ridiculously crass attempt to chat up Channing adds to her foul mood.

Once settled into her seat in First Class, Channing finds herself saved from an advance by a handsome male lead of a popular television show when her female seatmate, “reached casually across the dividing console and took her hand. ‘Sweetheart, did you remember to stop the newspaper?’”

Her seatmate, the observant and quick-thinking Lark sports short and tousled honey-colored hair and a business casual look. Like Channing she appears near the thirty-year mark. Lark’s cheery demeanor is not enough to dispel Channing’s mood, although the two women do find some civil ground over the course of the flight, confessing their lives’ current turning points and including the lesson in how to make tea. Indeed, the tea instruction also prompts Lark’s new interest in and awareness of tea for the next several weeks.

A clinical research manager for Gipson Pharmaceuticals, Lark is on her way to Cambridge to investigate problems with the human trial phase of a new arthritis medication. A few of the subjects have experienced alarming symptoms of dizziness and heart palpitations. When her inquiry reveals that some of those reporting the potential heart problems were in the control and did not receive the drug, the possibility of tampering with the trial becomes very real. Millions of dollars and the potential for breakthrough relief for millions of people who suffer from the disease hang in the balance.

Settling Channing’s grandfather’s estate turns out to be more complicated than anticipated. She is his primary heir and inherits the family manor. However, the investments of his estate are not sufficient to cover the taxes, let alone clearly needed repairs. Channing is facing difficult decisions. Will she return to her analyst job in Boston? Will she sell the estate? Will she accept the offer of her oldest, dearest friend and neighbor, Kenny Hargreaves, to marry him? That last bit is more nuanced than in might appear: Kenny is the Viscount Teasley (a hereditary peer), and also gay–and needs to produce an heir.

A Proper Cuppa Tea is a smart and sexy romance featuring two professional women. While their relationship first stutters from the distractions of their lives, when they decide to pursue it, the romance develops in a realistic, charming, erotic, and organic manner. These characters are well rounded and fully depicted. They have careers and responsibilities as well as relationships with other people. The blended plot lines and complications are integral to the potential for Lark and Channing’s future together. Further, this is how most of us fall in love–not in an isolated cabin with a stranger but while preoccupied and balancing the other parts of our lives.

Those relationships with others are significant and illuminating. Here, too, we find three dimensional characters. The charming and boyishly cute Kenny is often delightfully droll fun. Conversations with Kenny, his boyfriend Oliver, Channing, and Lark sparkle with wit.

Yet the day after Kenny has a few too many Blow Jobs–a drink consisting of Kahlua and Bailey’s and topped with whip cream–and hurts Lark’s by feelings repeating something Channing had said out of context, there are consequences for Kenny. Hungover and repentant Kenny apologizes and explains his realization that his behavior did not reflect the future he has planned with Oliver. At one point Kenny promises, “I swear it on Her Majesty’s handbag.” “You’ve always coveted that handbag,” Channing replies flatly.

Both women find themselves evaluating and processing feelings and choices regarding their past relationships. This is especially true of Channing and her office affair with Payton. One of the least likeable characters of the story, Payton’s controlling role was partly in response to her fear of being outed. Initially judgmental of Channing’s affair, Lark has time to consider how circumstances might lead one to complicated situations and choices. Indeed, being closeted and coming out to friends and family is another theme of the novel and provides more than Lark and Channing with opportunities for growth.

MacGregor’s newest romance is a marvelous, entertaining, captivating book as complex and full-bodied as that perfect cup of tea. Put the kettle on to boil, find a cozy chair, and settle in to enjoy A Proper Cuppa Tea.

'The Clothesline Swing' by Ahmad Danny Ramadan
'The Year of Needy Girls' by Patricia A. Smith
'Turn for Home' by Lara Zielinsky