Read This! An Excerpt From Kenny Fries’ ‘In the Province of the Gods’

Read This! An Excerpt From Kenny Fries’ ‘In the Province of the Gods’ 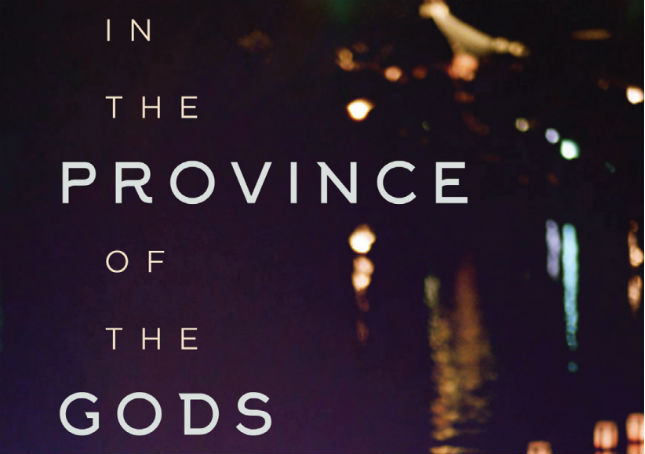 In September, University of Wisconsin Press released In the Province of the Gods, a new travel memoir from author Kenny Fries. Writer Marie Mutsuki Mocket’s states, “[Fries] neither exoticizes nor shies away from the potential pitfalls of a western mind traveling abroad; instead he demonstrates how, through an all too rare open heart and a true poet’s eye, bridges can be built, and understanding deepened, one sincere action at a time.”

Kenny Fries other books include The History of My Shoes and the Evolution of Darwin’s Theory, which received the Outstanding Book Award from the Gustavus Myers Center for the Study of Bigotry and Human Rights, and Body, Remember: A Memoir. He is the editor of Staring Back: The Disability Experience from the Inside Out and was commissioned by Houston Grand Opera to write the libretto for The Memory Stone. His books of poems include In the Gardens of Japan, Desert Walking, and Anesthesia. He was a Creative Arts Fellow of the Japan/US Friendship Commission and the National Endowment for the Arts, twice a Fulbright Scholar (Japan and Germany), and has received grants from the DAAD (German Academic Exchange), Canada Council for the Arts, Ontario Arts Council, and Toronto Arts Council. He teaches in the MFA in Creative Writing Program at Goddard College.

Kenny Fries embarks on a journey of profound self-discovery as a disabled foreigner in Japan, a society historically hostile to difference. As he visits gardens, experiences Noh and butoh, and meets artists and scholars, he also discovers disabled gods, one-eyed samurai, blind chanting priests, and A-bomb survivors. When he is diagnosed as HIV positive, all his assumptions about Japan, the body, and mortality are shaken, and he must find a way to reenter life on new terms.

Obon is the mid-August Japanese festival celebrating ancestors. During Obon, most Japanese return to their familial residence. Families decorate their houses with lanterns to help guide the ancestral spirits home.

Not having a family in Japan I don’t know what to do for Obon. A friend suggests I go to Kōyasan for the famous Obon Festival.

Kūkai, better known as Kōbō Daishi, introduced Shingon Buddhism to Japan in 805 AD, after returning from a boat trip to China. Kōbō Daishi is enshrined in eternal meditation at Okunoin cemetery on Kōyasan. The night before Obon, thousands of worshippers light a two-kilometer path through Okunoin leading to the Torodo, Kōbō Daishi’s burial chamber guarded by a thousand lamps, two of which are believed to have been continuously lit for nine hundred years.

I arrive on Kōyasan in the afternoon. I am relieved that among the tall cedar trees on the top of the mountain, it is much cooler than the brutal humid heat of the Japanese summer. There are no hotels on Kōyasan. The only lodgings on the forested mountaintop are in shukubo, simple temple lodgings in tatami-matted rooms. Guests are served shojin ryori, vegetarian meals eaten by monks, and are welcome at the daily six o’clock morning prayers.

After leaving my things at the shukubo, I decide to see Okunoin while it is still daylight. This afternoon I am the only visitor on the paths along the Tamagawa. The leaves rustle in the breeze at the top of the trees; shadows fall on the over two hundred thousand tombs.

Okunoin is the largest cemetery in Japan. It’s also spooky. The old section contains large nishinoya, stone lanterns, most with a yin-yang symbol with an open crescent incised in the stone to emit light. These nishinoya line the paths leading through gravesites of former feudal lords.

The tombs are composed of weathered lichen-stained fallen stones and large wooden poles dampened by the forest humidity. Often indecipherable kanji are incised in the stones and poles. I pass some tombs that look like small houses guarded by stone-slatted fences. Some have torii-gated entrances, showing how, over the years, Buddhism has absorbed Shinto beliefs.

In the cemetery’s newer section are company-owned tombs. Here, Japanese kitsch even reaches the dead: United Coffee Company’s tomb has a large marble coffee cup; another has a towering metal rocket. I search for the White Ant Monument, supposedly donated by a pesticide company to atone for the suffering caused to the insects its products killed, but I can’t find it.

The path gently rises as I get closer to the Torodo, the hall of lamps, which guards Kōbō Daishi’s grave. I pass huge stupa-shaped tombs that look like mini-pyramids. Getting closer to these mounds, I notice they are made up of countless niches, and in the niches are countless jizõ, each eerily adorned with offerings of childlike garb— bibs, hats, scarves, even pajamas emblazoned with familiar anime characters, including Pikachu, my totem yellow Pokémon.

I decide to turn back before crossing the river, leaving the sacred visit to Kōbō Daishi’s grave for this evening’s Obon procession.

After dinner, I walk back to Okunoin. As I approach the cemetery, the streets become increasingly crowded. Looking back from where we came, I see orange-robed monks carrying a huge flaming tree.  When the monks reach the cemetery entrance they stop so other monks can light candles from the tree’s flame.

The crowd follows the monks, so I follow, too. The orderly procession continues on the cemetery paths; small children run alongside us distributing candles.  Since my afternoon visit the paths have been lined with aluminum foil. Sticks protrude from the foil. A few lit candles are atop some sticks. People from the procession begin to stop. They light their candles from the already lit ones, and leave them on the empty sticks. In this way, those in front light the path for those who follow.

Soon, as the path moves further into the forest, the evening darkens. The flickering flames from the candles are the only light on the path to Kōbō Daishi’s grave.

Every so often, I replenish my supply of candles at small tables set up on the side of the path. Stopping at a table, I look back down the sloping path now lit by thousands of candles.

I stop again before crossing over the river to Kōbō Daishi’s grave. In the middle of the river are large upright planks in remembrance of children who have drowned. At the river crossing are five large jizõ statues of darkened stone. The custom is to douse the statues with water from the purification fountains at the base of each statue before crossing the river.

I take the large bamboo ladle. I wash, in turn, each jizõ. My dead—even those I have not remembered for many years—gather around me:  my boyfriend Alex, my acupuncturist Paul, the poets Tede Matthews and Melvin Dixon, all dead of AIDS; the actress Kathy Leavelle, my former boss and San Francisco friend, dead from lung cancer; my parents’ friend Civia’s son, Larry, her daughter, Nancy, her infant granddaughter, Larry’s wife, Cindy, dead from a car accident when hit by a drunk driver outside Civia’s Florida home. With each ladle of water, each dousing of a jizõ, more of my dead return to accompany me to Kōbō Daishi’s grave across the river.

A thousand eternally lit bronze lamps surround the Torodo. The long procession lines up to pass around the gates— always closed—guarding the cave in which Kōbō Daishi sits, where he is said to have rested in eternal meditation for over a thousand years.

It is believed that when Kōbō Daishi is ready for Buddhahood, he will take all those enshrined on Kōyasan with him. In the meantime, he awaits the arrival of Maitreya, the bodhisattva who will become the Future Buddha who will save all those unable to achieve enlightenment.

I wonder if anyone has ever entered the cave. If they did enter, what would they find?

I follow the path around the mausoleum and pass the building that holds additional lamps and scriptures, before re-crossing the river, leaving my dead behind to wait with Kōbō Daishi.

Back on the other side of the river, I don’t want to walk through the candlelit cemetery again. I remember Allan’s story of his first visit to a Japanese cemetery. Leaving the cemetery, Yoshihiro asked if he saw the bakemono, ghosts, on his shoulder.

Leaving the cemetery, I look back across the river to the Torodo.

I can no longer see my dead. But I feel as if I am somehow more complete, more integrated, as if my past finally has caught up with the present.

On my walk back to the shukubo, I don’t know how to explain what happened when I doused the jizõ statues with water. Is this why I came to Japan? To ferry my dead across the Tamagawa?

And I realize that the dead I saw were dead too young, too early.  If, according to Buddhism, they were taken from this life because of something their ancestors did, I don’t know what those actions might be. If I were to believe this, I would have to believe that there was a reason I was disabled, something I gave up thinking a very long time ago.

When I return to the shukubo, on the futon in my temple lodgings, I am kept awake by the candlelight still flickering before my eyes.

My last thought before sleep is of Ian, my ex from whom I recently separated before coming to Japan. He is surely someone I do not count among my dead. But he is the only person I know who is familiar with all the dead who had returned to me earlier in the night. The only person who could understand what I experienced is halfway around the world, where his day has just begun.

The next morning, I awake at 5:30 a.m. and make my way to the temple prayer hall. I sit silently listening to the rhythmic chanting of the monks, remembering how I fell asleep, when Alex and I meditated together when we lived in our Victorian house on Carl Street in San Francisco.

This morning, on Kōyasan, though my eyes are closed, I do not fall asleep. I am startled by what comes into my mind: last night, did I think of Ian because, in a way, he was taken from me before I thought it was time?

At the end of the prayer session, I rise and walk to the altar, where I leave an offering of coins and a stick of burning incense.

Before descending Kōyasan I buy a drawing of Kōbō Daishi, which I send to Ian when I return to Tokyo.

Excerpted from In the Province of the Gods by Kenny Fries. Reprinted by permission of the University of

Wisconsin Press. © 2017 by the Board of Regents of the University of Wisconsin System. All rights reserved.

Book Lovers: Ban This! The Novels of Elliott Mackle
Deafen the Satellites: David Wojnarowicz at the Whitney
A Literary War of The Words, Danez Smith on Writer's Block, and More LGBTQ News