Larry Closs: Bringing Back the Beats with ‘Beatitude’

Larry Closs: Bringing Back the Beats with ‘Beatitude’

“I had wanted to be a writer long before I read On the Road, but when I did, it had the same effect on me as it does on nearly every aspiring writer. Kerouac made me believe that I could be a writer.”

Screw expectations. That’s what the Beats said, even if they found the popular dictate impossible to follow. Expectations: tuning one’s interpretation of life to that of another, across a sea of experiential difference—a lesson in futility considering the cultural mediocrity of the day. Finding companionship on any level then becomes a torturous (if not banal) game of “kill or be killed”—the new rite of passage for deft expectation-slingers—where murdering the devil (before he defiles) is recompense for lost innocence and banished curiosity. Glum. But then again, so is reality.

Now that I’m finished feeling sorry for myself, let’s talk about the Beats—specifically, Larry Closs and the more-than-a-mere-tribute to Jack Kerouac, Beatitude (Rebel Satori Press). The story of Harry Charity and Jay Bishop begins in New York City—1995—just as the fall of Peter Gatien, godfather of the gay club and poster child for scandal, glam seduction and sexual scapegoating—taught the sons of his generation to release innocence and begin the search for compatibility and connectedness. Harry and Jay, two upwardly mobile publishing industry pros, are brought together by their common love for Jack Kerouac—the novel opens with the two would-be lovers fawning over a lost scroll manuscript of Kerouac’s On The Road—one of the generation’s most enduring legacies. But Jay is betrothed to Zahra—his girlfriend, the third wheel, and perhaps the most significant tie-in to the real-life triangle of Kerouac, Neal Cassady, and Allen Ginsberg. Harry, hopelessly consumed with his feelings for Jay, is catapulted into a world of cruel desire and remorse as he realizes this latest romantic mishap may be but one in a furious cycle of expectation-induced fantasy. Innocence and expectation ground the novel; you could say that “What do you do when you fall for someone who can’t fall for you?” is the question that relentlessly drives the narrative. But there is much more to Beatitude than unrequited love.

I didn’t know much about the Beat Generation prior to meeting Closs at one of his readings, and I was honest when I admitted I attended out of curiosity for Kerouac and nothing more. Since, we’ve shared conversations about this and that and the other, usually swinging back to the unstated morality of expectations.

Beatitude, in the words of one reviewer, “captures an experience universal to all people; that the greatest source of human suffering comes from our wanting things to be other than what they are.” Because a ruined life is what you get when your expectations get the best of you. Thanks, Ben, for hitting the nail on the head. Experiencing Beatitude, as the name might suggest, is about ditching expectations and diving in. Submissive readers, myself included, can especially appreciate the style in which Closs displays his characters on stage—one that presumes to raise the bar for both writer and reader by avoiding what the author refers to as “editorializing.” I found this curious, so I asked him to clarify:

I provided minimal description of the characters, minimal editorializing, because I wanted readers to get to know them the same way they get to know anyone—by listening to them speak, by watching how they act. I also wanted to subvert expectations about the differences and commonalities between straight and gay, friendship and love. I discovered that what you don’t show is just as important as what you do when it comes to establishing empathy, and that was one of my main goals—to establish empathy for each of the three main characters in the hope that readers would see the situation that arises in Beatitude from three different perspectives.

Apart from purely philosophical reasons, Closs also says that entrusting narrative to dialogue has a lot to do with mechanics—that holding the reader’s interest over 300 pages requires an element of mystery. As an avid reader, I know he’s right. But more than this, Beatitude is a reminder that captivation is wrought with skill, smarts and—what most people seem to have a hard time with these days—empathy. “That’s the ultimate insight of Harry, Jay and Zahra,” he says. “They put themselves in each other’s place, and in so doing, they each evolve.”

The story of the Beats is the story of today—maniacal, meandering and rebellious. This year, the movie version of On The Road debuts at the Cannes Film Festival. This latest derivative work is yet another example of the enduring appeal of the postwar generation. Closs says, “The Beats have remained remarkably popular for more than 50 years and their popularity rises as each new generation discovers them.” This lasting influence suggests an ongoing dysfunction between society and the norms it creates, but also serves as a lookout post for artists who are likely to channel their frustration through a muse of cultural debasement. Herein lies the seed of the counterculture of now: simulacrum out of control, introspection and imitation, retribution and humiliation—indifference to the suffering of others and our own—the schism between authenticity, falsehood, and invention. Could this be what the Beats were trying to say, generations before we would ponder the excellence and evil that now stares back at us through the looking glass? 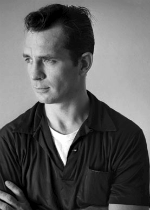 In a recent NPR Talk of the Nation segment, Crawford Kilian, a columnist for the British Columbia online magazine The Tyree, listed 10 modern literary classics he believes are harmful to aspiring writers—“more hazard than inspiration”—because “their readable styles look so easy they might seduce a young writer into imitating them.” On the Road is one of the ten. Here’s what Closs has to say about it:

As William S. Burroughs famously remarked, “Kerouac opened a million coffee bars and sold a million pairs of Levis to both sexes. Woodstock rises from his pages.” Kerouac’s influence on would-be writers is even more profound. I had wanted to be a writer long before I read On the Road, but when I did, it had the same effect on me as it does on nearly every aspiring writer. Kerouac made me believe that I could be a writer. And that it was easy. After all, in April 1951, he wrote On the Road in a single, nonstop caffeine-and-nicotine-fueled creative marathon on a 120-foot scroll of Teletype he created to avoid the breaks in concentration caused by having to keep changing the paper in his portable Royal typewriter. Employing a new “wild form” of writing he dubbed spontaneous prose, Kerouac produced a perfectly polished and publishable manuscript in a mere three weeks that became an instant and enduring bestseller.

That’s the legend. The truth is that Kerouac had been preparing to write On the Road for years, starting and shelving several drafts, scribbling endless observations in stacks of small notebooks and searching, searching, searching before finally finding the “fast, mad, confessional” style that would evoke “the holy contour of life.” He equipped himself with all of those when he sat down to write what would become his most famous book, and the resulting effort entailed as much editing, curating and collating as actual writing. Though Kerouac swore that no one would edit the scroll—“first thought, best thought”—they did. He did, in fact, as revealed by his own revisions and copy editing marks on the scroll and the subsequent versions of the manuscript he typed in a more traditional format. Still, it’s the legend that endures, and despite Kerouac’s own advice that “It ain’t whatcha write, it’s the way atcha write it,” it’s the legend that sparks every aspiring writer’s dreams.

Stylish, descriptive and emotionally raw, Beatitude is a calling card for both Larry Closs, the author, and Larry Closs, the man—intrinsically removed, abruptly convincing and familiar—one whose intimate recollection of madness in his own mind surfaces when least expected. To lose yourself in the unrehearsed authenticity of Closs, you’ll have to pick up the novel. And luckily for us, his engine is revving for future work. It was beat poet Allen Ginsberg who now infamously wrote, “I saw the best minds of my generation destroyed by madness.” Indeed, time to level the field.

What to Expect When You're Expecting a Screen Adaptation
Jeffrey Round: On Becoming a Mystery Writer
Stephen Zerance, "Lindsay Lohan"