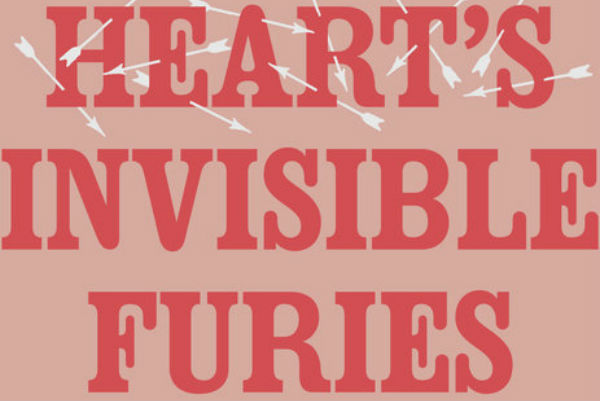 I can’t recall in recent years a more ambitious gay novel with such historical scope as John Boyne’s The Heart’s Invisible Furies. Larry Kramer’s The American People, Volume 1: Search for My Heart might be one. Tim Murphy’s brilliant Christadora comes to mind as well, but the field of current gay fiction tends to focus more on the interior lives of a few gay characters in books that are smaller and more intimate.

John Boyne’s epic covers the life of a gay Irishman, Cyril Avery, in the late half of the twentieth century from the time of his birth and adoption to his later decline and eventual death in the present day. Dickensian in scope, it has all the trappings of a nineteenth century novel, with its elaborate plot points, its twists and turns of fate and coincidence, and its ribald characterizations. Like Moll Flanders, Vanity Fair or Tom Jones with an ample dose of more contemporary novelizations such as The Goldfinch or The Nix, Boyne is determined to bring humor and heart to this witty saga. With a nod toward the greats of Irish and British literature, Boyne fashions The Heart’s Invisible Furies—which is sometimes picaresque and sometimes a novel of manners—against a panorama of gay cultural history.

With the skill of a craftsman, he moves down the checklist of historical events and plot points with assured precision, shifting his story from Dublin and a homophobic Ireland dominated by the Catholic Church and the staunch conservatism of closeted lawmakers, to a liberal Amsterdam of sex trafficking and liberation, to a New York City overwhelmed by the AIDS epidemic, and then back to a more tolerant Ireland. Another spirit at work in this book is that of Armistead Maupin, another gay author who in his Tales of the City created a broad tableau of gay life with memorable characters and ample humor.

Boyne’s title makes a nod toward the great, gay poet, W. H. Auden. Hannah Arendt said that it was “as if life itself had delineated a kind of face-scape [on Auden] to make manifest the ‘heart’s invisible furies'”. She was referencing a line, of course, from Auden’s poem “The Capital”:

Yet with orchestras and glances, O, you betray us
To belief in our infinite powers; and the innocent
Unobservant offender falls in a moment
Victim to the heart’s invisible furies.

This is an important reference, as Cyril Avery, over the course of this novel, goes through numerous emotional ups and downs, heartbreaks and elation, finally becoming a man physically ravaged by the fury of time. In a dramatic sleight of hand, Boyne has the dying Cyril experience several hallucinations, where the ghosts of lovers and friends long dead return to speak with him. These include Julian Woodbead, Cyril’s longtime friend and great-unrequited love, and the Dutch doctor, Bastiaan, Cyril’s partner and love interest.

In essence, this is a bold, exhaustive novel which leads no stone unturned, no dramatic scenario untried, no characters unscathed, no “prisoners” untaken. But Boyne is perhaps too ambitious for his own good: the novel is less certain if it is a realistic historical novel, a barbed satire, a comedy of errors or strict melodrama.

Boyne is a skilled writer and a superb craftsman. There is great tenderness and love in this novel, and great care is taken with its narrative to get it right; however, while the plot is breathtakingly executed, the sheer magnitude of characters and references to cultural milestones in each passing phase of the story, plus the somewhat forced coincidences of plot, ultimately lend an artificial feel to the story—one which ends, by the way, archetypically with a wedding.

There are moments of great gravitas in this novel, from the foreshadowing event in the first few chapters where two gay Irish lads newly arrived in Dublin are brutally attacked by a homophobic father, to the anonymity and heartbreak of an AIDS ward in 1980s’ New York; but, these episodes are undercut by Boyne’s persistent drive to create a broad satire.

As an epic genre novel however, this story succeeds in its cinematic scope and its huge scale of risk-taking, its keen dialogue, memorable characters, and moral authority. As an imaginative tour de force it is a spectacular achievement.