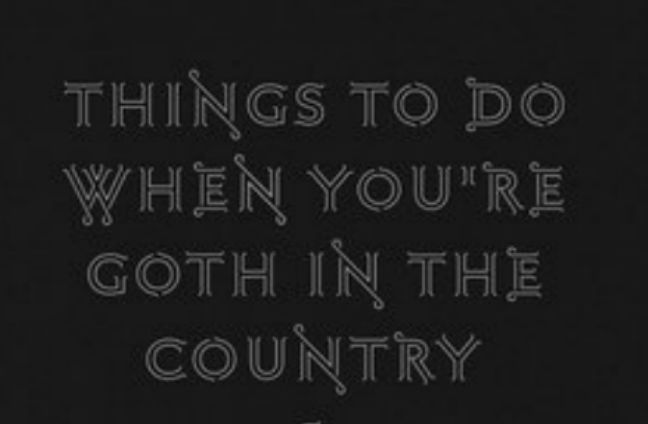 “All we kill is ourselves,” a mysterious voice from a well tells a teenaged girl in the title story of Chavisa Woods’s Things to Do When You’re Goth in the Country. That voice could just as easily speak for many characters in this stunning collection of short fiction: they cope with poverty in rural America and the psychic burden of war with self-destructive pleasures like smoking which, while immediately gratifying, are also slowly killing them.

Although many of the characters in the collection share a similar background—queer outsiders in rural Illinois—each story takes a wildly different turn. In the title story, a group of teenagers become goth as a means of coping with the death all around them. In “Revelations,” an elderly woman learns that there’s something sinister afoot in her Southern Baptist church congregation. And in “Zombie,” two friends discover and become fascinated with a woman living in a mausoleum (who may or may not have robbed a gas station). A few stories veer entirely away from realism, such as “A New Mohawk,” in which a man wakes up to find an exact, living replica of the Gaza strip on his head—including miniature, living combatants.

The stories in Things to Do When You’re Goth in the Country are all in conversation with each other, creating a collection that feels cohesive. Their themes overlap, exploring different aspects of poverty, self-destructiveness, militarism, otherness, and queerness. America’s ongoing military presence in the Middle East, for example, has implications not only for the “Gazahawk” man. “What’s Happening on the News?” uncomfortably illustrates military recruiting tactics in grade schools, and what happens to the children who grow up, enlist, and are sent to armed combat in Iraq and Afghanistan.

Many of the book’s characters are queer, but the stories are never ‘only’ about their queerness. It’s an integral part of their identities, and a complicated one, often making them outsiders in the place they’re from, but also propelling them to get out. Sometimes, that escape becomes a strange sort of privilege when they return.

Yet for all these stories’ similarities, one never has the feeling that plagues some story collections, of reading the same basic idea over and over. Woods is a gifted storyteller, and each piece follows its own unique twists and unpredictable turns. She has an eye for haunting details that give each narrative the texture of a fully-realized world. In “How to Stop Smoking in Nineteen Thousand Two Hundred and Eighty-Seven Seconds, Usama,” characters at a dive bar accidentally knock over what looks like a tip jar; when righting it, they see that it’s actually a donation jar for a teenager’s funeral.

It’s difficult to describe the book’s content without making it sound bleak, but reading it never quite feels that way. Woods is deft at using humor to modulate the seriousness of her characters’ struggles. One character’s mother tells her that Hollywood is controlled by the “gay mafia,” and she charmingly imagines this to mean “large men with scarred face wearing tailored suits, mysterious fedoras, and ostentatious gold jewelry, only, being much nicer to one another […]. That’s what they gay mafia was in my head: Al Pacino giving Marlon Brando sweet little kisses on the cheek.”

For many characters, dry humor is a way of coping with unbearable circumstances. The goth teens’ search for entertainment in the country borders almost on the absurd: “We liked to go to the haunted bridge in the next town over. Three towns away there was a haunted ditch, and in the country roads between Nashville and Hoyleton, Illinois, there was a haunted bump.” But, like any good ghost story, even a haunted bump becomes a window onto the legacy of a collective trauma and social ills: it’s haunted because a drunk driver killed once killed twenty school kids at that spot.

Told with and wit and gravitas, Chavisa Woods’s Things to Do When You’re Goth in the Country provides humane snapshots of outsider communities often overlooked in contemporary fiction.

'Sacrilegion' by L. Lamar Wilson
'The Galaxie and Other Rides' by Josie Sigler
'More of This World or Maybe Another' by Barb Johnson