‘The First Church of What’s Happening’ by Miah Jeffra

‘The First Church of What’s Happening’ by Miah Jeffra 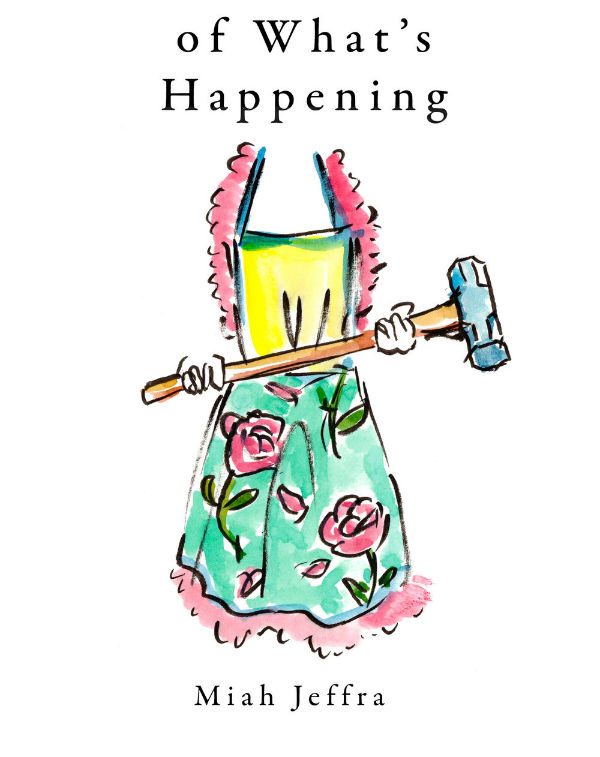 In “Growl”, the first story in The First Church of What’s Happening, author Miah Jeffra takes us through the anatomy of the expression; readers may find their own facial features miming along, “our nostrils spread open in the scrunch, and the teeth, the canines specifically, reveal themselves.” In this way, First Church is a uniquely embodied read from the first sentence onward.

Jeffra’s prose is rich and languid, often coming in a series of dream-like images: a snarling dog stands before the six-year-old narrator; later, we smell the putrid stench of overcooked eggs and hear the clang a heavy frying pan as it is wielded as a weapon between parents.

Jeffra draws inspiration from many sources: the story of Prometheus and Frankenstein’s monster in remembering the end of a past relationship; another relationship recalled only through dictionary definitions in “First Love: A.” In a letter to Keith Haring, he recounts the hollowness of progress in a world still dominated by sex negativity, erotophobia and binary thinking, writing “I am certified now, and this is San Francisco. I have rights. I can even get married”–yet likening this progress to the mere five minutes of freedom “free range” chickens are required to have access to in order to be given the label–a freedom, Jeffra notes, that in their learned helplessness, they largely ignore.

While one might be disheartened by such a dismal view on the steps LGBTQ rights have made in recent decades, Jeffra’s cynicism seems to serve another purpose. While he writes of many things – the fear and confusion of children growing up in violent homes; the breathtaking lust of youth and first loves; the anxiety, chagrin, and frustration of inhabiting queerness in decidedly non-queer spaces; the terror of sexual assault, and the pressure and self-consciousness of navigating the identities of gay man and childhood sexual assault survivor–Jeffra’s writing is delicate and deliberate when it comes to depicting despair. And while he does not deny the heaviness of humanity, readers do not leave his stories feeling heavy themselves. Rather, it inspires a sense of gratitude and reverence, as well as an appreciation for beauty and tenderness, even in the midst of profound sorrow.

In First Church, loneliness and innocence, as well as sensuality and eroticism, exist side by side, merging effortlessly into each other. A frightened young boy must witness the violent turbulence of his parents’ relationship; two young men have feverish sex in a parked car in L.A. The “incivility” of the grotesque–“ass-picking and hocking snot”–is short on the heels of intimacy, leaving no stone unturned when it comes to the physicality of human experience. Jeffra doesn’t shy away from the body, and the incisiveness of his style forces the reader to consider their own experience as a human animal.