‘Tall As You Are Tall Between Them’ by Annie Christain

‘Tall As You Are Tall Between Them’ by Annie Christain 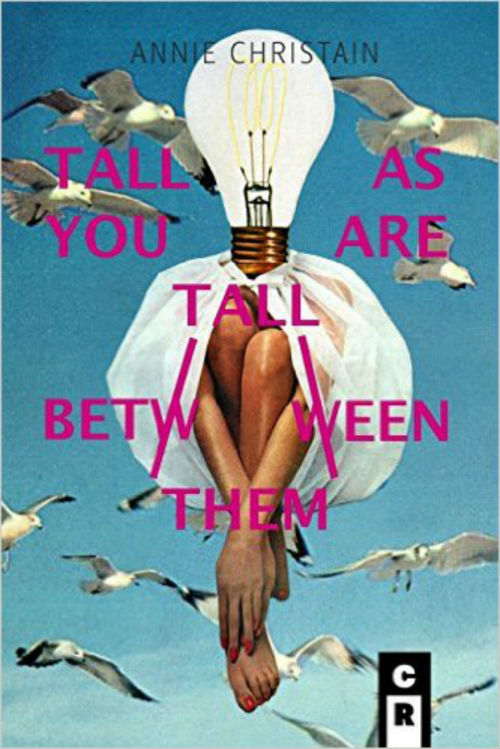 I give up. Annie Christain has stumped me. How should I review a book as polyvocal, enigmatic, primal, incantatory, whimsical, mythical, political, deeply pleasurable, and profoundly queer as her debut collection, Tall as You Are Tall Between Them? What more can I do than to pronounce this volume a voluminous mind-fuck, in the best and most visceral way, then set down my pen with a gesture of awed surrender?

I wanted to review Tall as You Are Tall Between Them because I read the first poem and loved it, then read the second poem and loved it, and so on and so forth like that through all 64 poems. Why not review a book if you love it? I reasoned. And besides, I already promised my editor I would.

Then, I remembered reading an essay by Margaret Atwood many years ago called “Nine Beginnings” which begins, “I’ve begun this piece nine times.  I’ve junked each beginning.” The essay itself unfolds as a pastiche of those nine beginnings. So, as I often think to myself, If it’s good enough for Margaret Atwood, it’s certainly good enough for me. Consider what follows to be: “Nine beginnings for a Would-Be Review of Annie Christain’s Tall as You Are Tall Between Them”:

1. Tall as You Are Tall Between Them, Annie Christain’s debut poetry collection, offers readers a raucous and glorious, spiritual and secular, cosmic and commonplace cacophony of voices. But “offers” is the wrong word.  This isn’t a book that shakes the reader’s hand politely, then suggests she take a seat in the parlor. That’s far too orderly and staid. In fact, the reader doesn’t have to linger or listen at all for these eclectic and full-bodied speakers to overtake her. Think of a hum growing incessantly louder until the language rushes toward you like a swarm of furious bees—yet also, at the same time, syrups toward you with a sweet deluge of honey. Now you can begin to imagine why this book is not merely an offering but also a demand.

2. There is really nothing like Annie Christain’s debut poetry collection, Tall as You Are Tall Between Them, yet still I grope for an analogy: The experience of reading this book is like learning to write calligraphy with your non-dominant hand while ice-skating across a frozen playground, yet somewhere in the middle, landing a triple axel with a double toe loop before stuffing cryptic but beautifully penned messages into all the ovals of the cyclone fence. Nota bene: this book is more like the cyclone than it is like the fence. Nota bene bene: This whole book is a nota bene.

3. Here are some terms, phrases, concepts, and small epiphanies that arose during my first textual forays into Annie Christain’s debut poetry collection, Tall As You Are Tall Between Them: Astral projection.  Bricolage.  Cavalcade. Stranger danger! Rhizomatic growth.  Prodigious hodge-podge. Potpourri—more specifically, the kind of potpourri people accidentally eat at parties because it looks so believably edible, a temptation too hard to resist. Image-drunk. Language-drunk.  Idea-drunk. Ekstasy, wherein reader and writer alike stand outside the text, peering in. Odyssey. Glossolalia. Sui generis. Most especially sui generis.

4. I’m thinking about creation myths and origin stories as I read Annie Christain’s debut poetry collection, Tall As You Are Tall Between Them, spurred on in this way of thinking by startling lines like “Just by coincidence, not once since I come here have I not been pregnant/ in one way or another,/ and there’s no tellin’ what that can do to a man.” I’m also thinking how everything is measured by something other than itself, the way the title “you” is only tall in relation to “them,” and maybe not tall at all without “them.” I’m also thinking how my own life—but perhaps not only my life—can be summed up in a sage declarative like this one: “I walk into a room I should not have.” I’m further also thinking about Joan Didion, how she begins “The White Album” with these famous words: “We tell ourselves stories in order to live,” and ends with a confession that reads as a concession, perhaps even an act of surrender: “writing has not yet helped me to see what it means.” Most likely, if you think “The White Album” failed as an essay, you’re going to think Tall As You Are Tall Between Them has failed as a collection of poems. And if that’s what you think, you’re entitled to your opinion, even though you’re wrong. “The White Album” is a brilliant and brutal reckoning that anticipates another one, written as poems and published nearly four decades later.  And that one is this book of creation myths and origin stories that attempts to explain: “All of this began when I saw the bird/ use his beak/ as a phonograph needle.”

5. Annie Christain’s debut poetry collection Tall As You Are Tall Between Them is like if the phrase “everything but the kitchen sink” were changed to “everything and the kitchen sink” and that kitchen sink had a faucet that wouldn’t turn off and was full to the brim with the very best China. Reader, are you ready for the clatter and swish, the high art and low, Latinate verse and Anglo-Saxon, the rising tide of the scalding heat and also the giddy bubbles? Go ahead then—plunge in your hands:

I stole from the Out of Body Experience hospital

Because of Fukishima,
I’m living out all the Brando outtakes
___________ from Apocalypse Now,

________carrying Bacardi Breezers in my pockets
with three-hundred ghosts in each bottle.

Her male ancestors stood on a cloud and cheered me on with their demands
for a male heir. I told her what I tell all the girls: I want to investigate your
faith.

I have a feeling I liked being around Diana even more than my daughter,
Alexis, did. I thought Diana’s hands looked beautiful like the hands of a
male homosexual piano player. I made it my job to send her new scarves,
back-braces, mirrored sunglasses, and varicose vein socks even when she
had a full supply.

6. There is really nothing like Annie Christain’s debut poetry collection, Tall as You Are Tall Between Them, yet still I grope for an analogy: This book is like bending a spoon with your mind while being the spoon at the same time, so you’re bending yourself as a spoon, and then you realize there is more than one spoon, and they’re all bent, and some are versions of you and some are your familiars and others are your nemeses, and in fact, on closer inspection, you realize the whole silverware drawer is wearable as jewelry at this point.

7. Buy Annie Christain’s debut poetry collection, Tall As You Are Tall Between Them. This first step is important, not only because poetry books need to be supported with purchase, but because this is a book that will serve you well, whether you know it yet or not. After you buy the book, read it through thoroughly and likely more than once. Allow for a certain bewitching bewilderment to befall you. Don’t think of the text as a test, even though it may resemble a Rorschach test upon occasion. There is no way to fail. Make marks in the book, too. Jot down your questions. Underline places where you feel intense emotion, even if you aren’t sure why. Fold down corners of the poems you like best, even if you aren’t sure why. (For me, there are a number of these, but I double-dog-eared one called “Done When No Longer Pink Inside.” Nota bene: a double dog ear is quite similar to a double dog dare.)  Then, take the book to the post office and mail it to yourself, or better still, give it to someone you trust and have them mail it to you at an undisclosed future time. You won’t forget about the book, not completely, but when it arrives, you won’t be the only one who has changed in the interim. The book, like the organic matter a book should be, will have changed, too.  You’ll find yourself underlining different places, folding different corners. Repeat this process as often as necessary.

8. There is really nothing like Annie Christain’s debut poetry collection, Tall As You Are Tall Between Them, yet still I grope for an analogy: The experience of reading this book is like learning that the Vatican and Woolworths had a baby together and named him Wildly Pungent and Irrepressibly Good-looking—which he was—and further learning that when that baby was sixteen, he got a driver’s license without a glitch or a sneer and no one in the whole DMV even batted an eye about printing Wildly Pungent and Irrepressibly Good-looking Vatican Woolworths on a 2 3/8” x 3 5/8” laminate card.

Do you feel the entropy? It’s very cool and charming
but beyond the mainstream for a reason.
Pull out the sword from the inside.
No one ever told me what this means,
but sometimes I think they did.
In the meantime, I am making you
responsible for turning on music
I can leave to.

'Blind: A Memoir' by Belo Miguel Cipriani
'The God of Longing' by Brent Calderwood
'Leaving Paris' by Collin Kelley