A Look at ‘Vetch’ a Magazine for Trans Poetry and Poetics

A Look at ‘Vetch’ a Magazine for Trans Poetry and Poetics 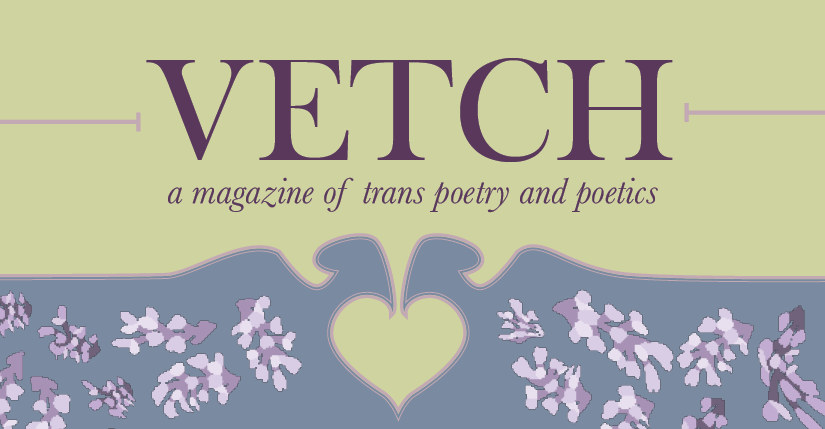 Vetch, a journal dedicated to transgender poetry, released its second volume last April. You can read it here. Editors Kay Gabriel, Stephen Ira, Rylee Lyman, and Liam O’Brien gifted us another smart issue that curates in order to contribute; literary journals archive a moment of the discussion but they can, and should, also intervene. Vetch makes incisive intervention its signature style. They’ve just released their lively call for submissions for volume 3. While you’re polishing up your poems for the September 1 deadline, let’s look back at the work in the previous issue.

The opening piece, Joss Barton’s searing “Eulogy,” is an explosive, stunning tribute to Bryn Kelly, writer, performer, and former Lambda Literary fellow who died this winter. Barton’s exultation is part “Howl,” part Lemonade, part Letters to Kelly Clarkson, a prose poem composed in agonized drift, moving from the heartbreak of memory to existential awe to confessions of an envious fangirl:

There must only be a few people like you left in this cold world, ones who are able to give up the most precious pieces of themselves to others around them, strangers, that stick to the bone of a person, as if we needed it more than you.

Barton’s eulogy rips everything in half at the beginning of the volume’s thematic meditation on “Temporality & Loss.” In the issue’s “Editor’s Note” a formal dedication to Bryn comes through a stark statement that acknowledges and names the devastation of living in this vast wasteland of personal loss, this witnessing of global violence against trans people of color. The poems that follow cover death and murder, historiographic and literal loss, and “utopic invocations of possibility by which the distance of the past helps us to focus negatively on the injustice and exploitation of the present.” For a journal, arrangement can mean anything, but in this issue of Vetch, I’m taken by the way it mourns how we mourn in times of crisis. The editors offer a meticulous arrangement for this extended eulogy.

At times, there is dialogue through arrangement, as in the shift from Tanis Franco’s poem “(a ship” to Thel Seraphim’s “Tall, Inseparably.” These two poems reflect on each other, look at one another across the page break. Even the titles signal little wounds of punctuation, rejections of stability. While Franco arranges eco-anarchist symbols that spiral into one another, Seraphim writes mythic address that echoes out from lost places and former selves. I’m still hanging on Seraphim’s line where invisibility and emptiness transform and collapse—“Seeing no one there we gathered”—as a punk encapsulation of trans sociality.

The next poet, Rebecca Bedell, arranges “After the Move” in stanzas that look fragmented, like something is already lost. Negative space appears almost as unknown blanks as a powerful internal rhyme dramatizes the lock of the nuclear family and its power as a mechanism of erasure and silence.

Contrast this to the presentation of several long poems in the issue. An. cinquepalmi’s “Apricot,” an effusive seven-page poem that concludes the issue, begins with a reference to one of the great poets of loss and the filmmaker who worked in split temporalities: “I want to write the apricots because of Inger Christensen & Ingmar Bergman.” There’s a landmark line about straights who gawk at us—“their boring orchard of scrutiny.”

Arrangement celebrates style; the goal is balance or symmetry. It’s a matter of weight. Vita E’s exclamatory and obviously urgent “Pee Problems” serves in interesting temporal contrast to the long view of Hal Schrieve’s “but what did they do before webcomics?” an object-oriented buildungsroman that riffs around history, personal and political: “For food you eat / hookups in 1999.” Both compositions claim the poetic “I”; both display how the politics of identity wreck havoc in the body and mind.

There are so many lush turns and flourishes of language along the fault lines of grief. The lyric poem receives a nice showing here, with tight quizzes by manuel arturo abreu, Cat Fitzpatrick, and our beloved Trish Salah’s cunning exploration of “cuir poetics.” In “what do i make of my face,” Wo Chan turns simple contradictions into poetic provocation. I’m forever enamored of their political meditation at the most cellular level of self and the social. The line-by-line spills from concept to colors diagram the internalization of one’s own pained difference into the body:

when i was 9
i watched Aladdin and thought, after money
i wish for whiteness

*i didn’t even have all my teeth—or vocabulary,
just two yellow hands trying to catch the basketball

my brother hurled at my face

Other highlights are Aristilde Kirby’s dazzling botanical bird poems and work from merritt k, who demands:”how do I show you what hurts me/without letting it swallow who i am?”

The sketches throughout this issue suggest one answer: you illustrate, render hurt and joy through other lines. Sketches vibe with the issue’s theme as drawings in flux, simultaneously finished and incomplete. Editor O’Brien’s work punctuates throughout, sometimes as ceremony, other times as wit: two dogs stare at one another face-to-face on a surface that also looks like a kind of throwback class note scribble of emphasis.

What is language anyway? Bo Luengsuraswat’s sketches are architectural and material—shoes, a city block, until we get to this curious portrait near halfway through the issue. Don’t you want to see what it is?

A Poem by David W. Pritchard
The Perks of Being Uncanny: The Queer Aspects of the X-Men
'Holding Still For As Long As Possible' by Zoe Whittall