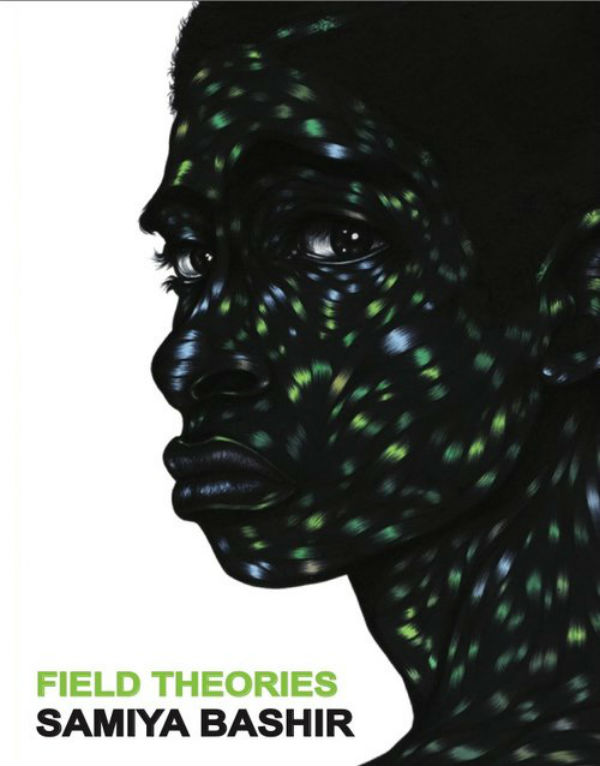 Samiya Bashir is the author of Field Theories and the founding member of Fire & Ink: A festival for LGBTQ writers of African descent. Along with Field Theories, Bashir has written Where the Apple Falls, a collection about the intersection between woman and female, and Gospel, “…a book you’ll constantly come back to,” says Patricia Smith, “for both beauty and guidance.” Samiya Bashir has also co-edited Roll Call: A Generational Anthology of Social & Political Black Literature & Art, which of June Jordan said there is, “Nothing predictable here: no re-run, and no ho-hum, neither. Roll Call is news!” And so is Field Theories.

On her website, Bashir says she makes poems from dirt, sometimes variously rendered text, sometimes light. Her poems range from gospel dirges to references of Norse gods, but in Field Theories she leaps into the science of quantum mechanics, thermodynamics, and social fields (be it academic disciplines or musical genres) patterns of interaction between the individual and his or her environment and the intuitive voice of the soul, which Bashir highlights, “was once viewed as having supreme control over our characteristics and the way we represent life in space: our behaving self.”

One thing’s for sure, Field Theories contains an energy, or energies, and Bashir explores every aspect of it/them. The collection looks directly into the eye of blackness, death, slavery, American history, and beauty without budging. “What is a thing of beauty if not us?” she asks, in the title poem with its couplets, that if read out loud hum like a military march.

bent into the yawp
ass up

How a body grabs a body.
Hungry. Even Jesus….

It goes on from there, asking, “Music? Anyone ever really heard us sing?” The poem then ends with the deliberate, yet heartbreaking word, “Repeat:” and the elliptical colon, as if poised for yet another litany—even if imaginary—of pride, history, and sadness, and redemption, of which lead me back to the center of the poem (which is really the central theme of the book), “What is a thing of beauty if not us?”

Of Field Theories, Adrian Matejka said, “There is so much happening in these poems…” And it’s true. There are poems in the voices of John Henry and his wife, Polly Ann, in sections titled “Coronagraphy,”—a coronagraph, as some may know, is a telescope that uses a disk to block the Sun’s bright surface so that one might be able to see things close to it. However, one can’t help but think of a Coronary Angiography, which is a scientifically medical system that X-rays the chest to detect blockages in the heart—which have the literary craftsmanship of Jean Toomer, and is a further study into the relationship between the monumental black figure—be it male or female—and social science, people and their environment, their societies and have the lyrical ballad swing of the language we hear on the street mixed with the colorful characters of the American folklore: man against machine, man against boss, man against the power structure.

Field Theories pivots around this central theme, that the black body—scientifically speaking—is an idealized physical body that absorbs (my italics) electromagnetic radiation, while a white body reflects (my italics) all rays completely and uniformly in all directions. It’s how Bashir renders that theme which makes this collection worth reading. She has taken science and folklore and emphasized the interactions between the individual and his or her environment with a lyrical adeptness that excites the poem/s. There is an intuitive force and a soul to this collection, but there is also the shadow. The mind versus the body, light versus darkness, the individual versus society, and how we measure them all —all of which are very alive throughout each section, either through her exploration of properties or characteristics, “life space,” and the behaving selves.

From what I’ve learned of thermodynamics in preparing for this review, heat travels from hotter to colder bodies, never in the reverse unless external work is performed. And that’s what Samiya Bashir is doing in Field Theories. She recounts the countless black bodies that have either been either tortured, beaten, abused, or murdered, and with the external work of language and syntax brings them back to life: from cold to hot, and reverses it.

In the Poets’ Companion: A Guide to the Pleasure of Writing Poetry, Kim Addonizio and Dorianne Laux write: “Robert Bly calls the shadow ‘the long bag we drag behind us’ and by the time we reach adulthood there is only a ‘thin slice’ of us left—the rest is in that long bag….”

And in Field Theories entire societies have their shadow: America’s “long dragged bag.” When we refuse to acknowledge it not only do we lose the chance to integrate but we risk being dominated by it

Kevin Coval, Quraysh Ali Lansana, and Nate Marshall: On the Queer Aspects of Hip Hop
A Poem by Hannah Larrabee
Queer Superheroes, Diverse YA, and Other LGBTQ+ News

Born in New Orleans, Shane Michael Manieri holds an MFA in Poetry from Columbia University. His honors include a Writing and Democracy fellowship from The New School University; a full-immersion linguistics grant from the University for Foreigners in Perugia, Italy, and a translation grant from the School of the Arts at Columbia University. His poems have appeared in 'Painted Bride Quarterly', 'Lambda Literary', and 'Vinyl Poetry' and 'Prose Journal'. Shane is currently translating poems by the 20th century Italian author, Dario Bellezza. Follow Shane on Instagram @redshelley