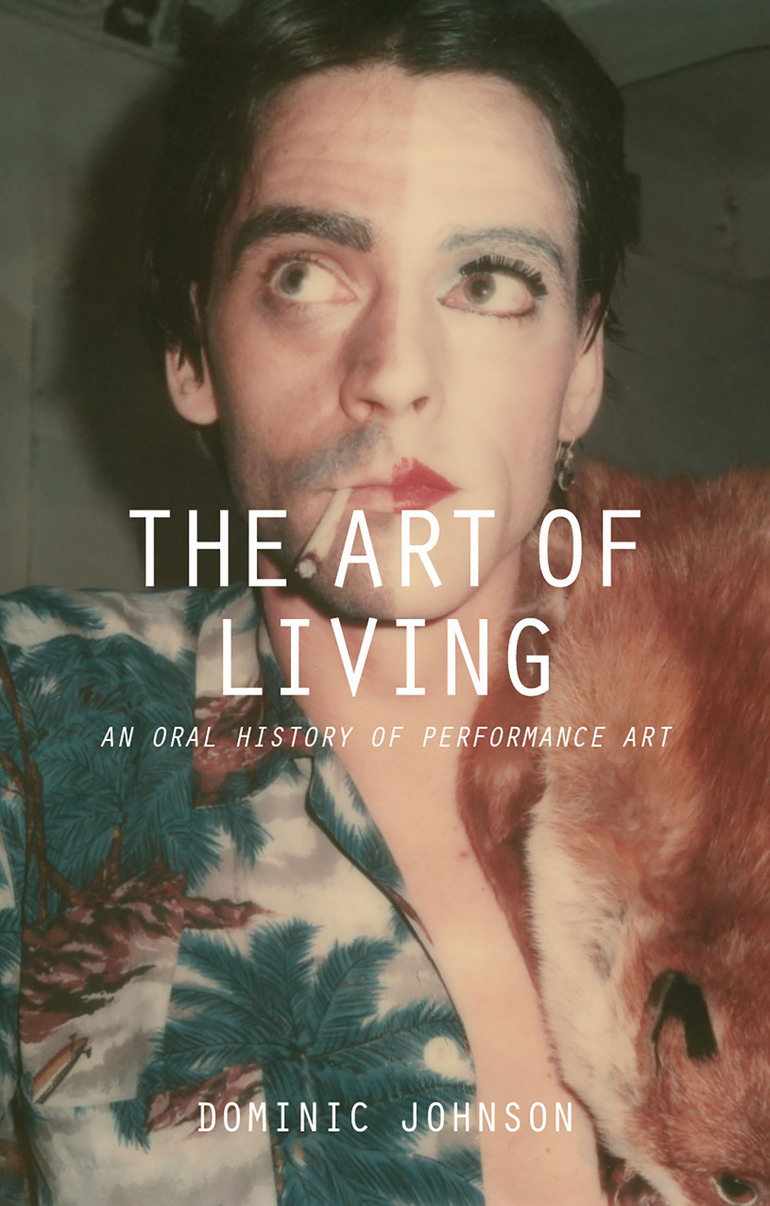 ‘The Art of Living: An Oral History of Performance Art’ by Dominic Johnson

‘The Art of Living: An Oral History of Performance Art’ by Dominic Johnson

Books on performance usually demand glossy photographs and high levels of production, but in The Art of Living  Dominic Johnson offers us simple and compelling words. The book is, in a sense, an oral archive transcribed from interviews. Performance has always depended on the oral tradition; subversive and often uncomfortable, performance is consigned to the margins by both art and theatre critics. From the punk scene in LA to the squats and studios along the Thames in London in the 1970s, performance has been underground and ephemeral, remembered only through anecdote and, occasionally, through photography. Some performances, like those of the legendary Leigh Bowery, exist only in the oral tradition; I remember him in the early 90s as he whirled like a dervish in outlandish costumes, but we were all too busy raving to document it in any lasting way. Other performance books rely on this kind of witness account as another portal into an artist’s work, but Johnson lets the artists, so often forgotten in the dyad of critic and audience, talk for themselves: “to give an account of oneself,” as Johnson qualifies it.

There is a necessary nostalgia present in Johnson’s interview questions, as his interviewees – including performance heavyweights Ulay, Penny Arcade and Ron Athey – are all over 50 years old. As they look back on their formative years, there’s a sense that performance mattered in the 70s and 80s in ways that it doesn’t matter any longer (though this is not to diminish the work of younger 50-something-year-olds, such as guerrilla drag-queen David Hoyle). While not all the artists identify as queer (like Hoyle and his alter ego The Divine David0, they still employ queer strategies in order to disrupt gender binaries, thwart biology, and interrogate capitalism and gentrification.  And it’s a strategy that extends beyond the performance space. Within these series of interviews with twelve American and British performance artists, Johnson questions not so much the nature of the performances, but the nature of their everyday lives, though they are far from quotidian. Their lives are their art, and for these performers the boundaries between performing and living are blurred. Take, for instance, Anne Bean who left her home in London to move to a new town, with a new name and a new identity. This project liberated her: “it’s a destructuring of one’s ‘life-art’… I allowed myself to overwhelm my relationship to myself“, she says.

Rather than reinvent biographical details, the artists Genesis and Lady Jaye BREYER P-ORRIDGE have reinvented their bodies by disordering their DNA.  Through cosmetic surgery, and other body modifications, the artists came to resemble each other and forged a singular and shared identity known as BREYER P-ORRIDGE.  Lady Jaye died in 2007 just after Johnson’s interview, and in response Genesis dropped the ‘I’ pronoun for ‘we.’ Genesis said that this signified “Lady Jaye’s continued presence in our body and personality… as we continue to create works we co-created and proposed. ” This is endurance art with no end in sight.

While Dominic Johnson asks different questions of each artist, he repeats one query about terminology: should we call this kind of work”performance art,” or “Live Art”? While some of the artists agree that both terms appear old-fashioned and generic, BREYER P-ORRIDGE favors the term “Living Art,” a dynamic practice that penetrates every moment of one’s choreographed life. David Hoyle believes that the stage is vital to his identity, suggesting that he would not feel alive without it: “Maybe I’m more ‘real’ on stage than I am in ‘real life’” he suggests. “In between performances I’d just close down as a person, and barely function as a human being.” He thinks he should get out more and be more open to new experiences that are located outside of performance, but I wonder where those places are.

Reading these interviews inevitably leads us to examine our own lives and the choices we make. Could we make life-long commitments to fight injustice and inequality? Could we even make life-long commitments to each other? Through their answers to Johnson’s questions, these artists suggest that these commitments despite their difficulty, are possible. While Johnson’s short, open-ended questions may refuse satisfying chronological (auto) biographies, but instead they broach ideas more spontaneously, and the rapport between he and his subjects is palpable. By rejecting a heavily analytical approach, this oral history offers alternative and honorable ways of living our lives. This book is full of valuable life lessons.

'The Road to Emmaus' by Spencer Reece
'Butch Geography' by Stacey Waite
'Christmas Days: 12 Stories and 12 Feasts for 12 Days’ by Jeanette Winterson

I teach English and gender studies to American students in London. My PhD thesis was entitled 'The Last of the Queer Romantics: Mourning and Melancholia in Gay Men's Writing.' It looked at Mark Doty, Derek Jarman, David Wojnarowicz and Franko B.