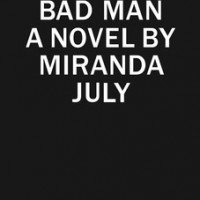 Meet Cheryl Glickman. In Miranda July’s debut novel The First Bad Man, Cheryl Glickman is the dowdy, middle aged protagonist of a strange but moving story, and one half of a relationship well beyond traditional examples of love. A single woman in Los Angeles, she works from home for a self defense aerobics course, the owners of which she has labored for for twenty years. The novel propels on a series of desires: first, it’s the possible romantic interest of Philip, a prominent donor to the self defense organization. There’s comedy in how earnestly Cheryl tries to be wanted: when Philip invites her over for dinner (the sixty year old man has a confession he’s been wanting to make to Cheryl), she puts on “the pin striped dress shirt again and a very small amount of taupe eye shadow.” Inside Philip’s home, he touches Cheryl’s arm:

“Want to know something crazy?”

I made a shocked face that was too extreme and quickly ratcheted it down to baffled surprise.

The language and details July chooses to illustrate Cheryl and her desires are the witty, absurd kind that make July’s perspective so unique. Cheryl’s inner world is often pushed to the very edges of weirdness. She imagines herself as an old dog that will be abandoned once she and Philip become lovers, then mixes her own bowel movement into the metaphor: “I flushed and washed my hands and only by luck did I happen to glance back at the toilet. It was still there. One had to suppose it was the dog, shot, but refusing to die.”

Of course, Philip’s confession is one of love, but love for a sixteen year old girl. They want Cheryl’s blessing before they consummate their love. Amping up the drama is Clee, the twenty year old daughter of Cheryl’s bosses who comes to live with Cheryl, creating an offensive presence in velour sweatpants and constant television viewing in Cheryl’s living room. It seems that Cheryl just wants her globus sensation to relax (an ailment that takes her to a color specialist, then a therapist), for Philip to love her in her own weird way, and for Clee to move out. In an interview with the New York Times, July said she was influenced by “violent page turners,” forcing her to recognize that she wanted The First Bad Man to be a thriller. The bizarre ensemble certainly compels readers to turn the page as each of Cheryl’s problems combust into stranger and stranger demands. Philip harasses Cheryl to sign off on his Lolita complex (he texts her  in all caps: “KIRSTEN WANTS YOUR PERMISSION TO DO ORAL. ???! NO PRESSURE. STANDING BY UNTIL YOUR GO-AHEAD.”). Clee’s rudeness becomes aggression, as she berates Cheryl with sneers and then punches. Cheryl brings it up to her new therapist, who advises her to fight back. It’s startling, but also refreshing, to make physical violence between women such a focal point of their relationship. This morphs into a new intimacy of role playing scenarios from the self defense videos. There’s a strangely tender moment where the two women are mid-role play, and both realize that they’ve chosen a scenario with two villains.

“Which one are you?”

She hesitated. Until now there had been no overt acknowledgement of the video or that we were anyone but our own angry selves.

July’s talent exists in her ability to create such complex, bizarre relationships while always raising the stakes, but her carefully erected world does require a willful suspension of disbelief. For all the time we spend with Cheryl, she is a character that never feels close to us. The world around her is almost superficial, the other characters appearing and disappearing, without back story, and sometimes without depth. There’s an emotional incline to the story when Clee becomes pregnant, and Cheryl takes care of her up through the dramatic delivery. The tone of the novel shifts in an impressive way, as Cheryl goes from a woman obsessed to a woman with purpose.  Predictably, the two women become lovers, leading to some comical (if not also reductive) scenes in the hospital: Clee puts her arm around Cheryl as they walk down the hall, and Cheryl thinks to herself that the people seeing them are the first people she’s come out to. But a happy ending with their new found affections is far too simple a conclusion for this novel. Clee will disappoint, as will Phillip, and the therapist, and Clee’s self-absorbed parents (perhaps the most comically self-absorbed of all the assorted characters). What readers may have adored about July’s award winning short story collection, No One Belongs Here More Than You, was how each story was an original gem of loneliness, of characters wanting to participate in the world in their own weird ways. It’s harder to sustain that kind of relatable humanity across an entire novel. While some may have clutched the short story “Something Out of Nothing” to their chest, an achingly heartbreaking portrait of two young women bumping up against the other in love, that particular brand of emotion never comes to term here. It may be underwhelming to wish for a novel of those two young women in love, especially when it is a truer expectation of July’s talent to recognize the ambition and risks her bold debut novel achieves.

'My Life, A Four Letter Word: Confessions of a Counter Culture Diva' by Dolores De Luce
‘Some Hell’ by Patrick Nathan
Feminist Writer and Activist Melanie Kaye/Kantrowitz, 73, has Died