‘The Gilded Razor: A Memoir ‘ by Sam Lansky

‘The Gilded Razor: A Memoir ‘ by Sam Lansky 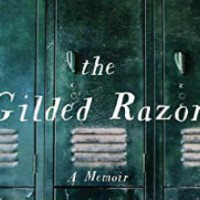 Much as Brett Easton Ellis’ 1980s novel Less Than Zero was described upon its release, Sam Lansky’s memoir The Gilded Razor is also a “coolly mesmerizing” story, “a raw, powerful portrait of a lost generation who have experienced sex, drugs, and disaffection at too early an age, in a world shaped by casual nihilism, passivity, and too much money in a city devoid of feeling or hope.” An air of cynicism pervades both works. But whereas Ellis’ is a work of fiction, Lansky’s is an actual tortuous, blow-by-blow account of a young gay life spiraling out of control. In an age of addiction, rampant through the gay community—the scourge of Crystal Meth and prescription drugs—it is a timely and relevant topic.

The insecurity and self-destructiveness of gay youth in the face of the “It Gets Better” movement is indeed ironic. Hope is in little abundance, and sorely needed, but still there are glimmers of promise. This memoir evidences such a resolve to overcome the seemingly impossible and affirms the work of other positive forces in the gay community and the determination of one young man’s bravery to speak his truth.

Sensitively written, Lansky’s work grapples with his demons—his parents’ divorce, his infatuation with the glamorous life of New York City, his reliance on sex and drugs to fill up his own well of loneliness and mask his self-hatred and low esteem. Following his move to New York with his father, Lansky charts a course of prep school angst, late-night encounters with middle-age men, rounds of rehab in Utah, New Orleans and Arizona, a failed attempt of college at Vassar, and of course the endless litany of drugs. The sheer physical exhaustion of Lansky is palpable on the page.

I just feel like—okay, so, ever since I was a little boy, I have known that deep inside of me there is a door, and that door leads to a room, and inside that room, there is a table, and on that table is a locked box that contains the meaning of life—like, all of the happiness that I could ever wish for or want or dream of having, you know?—and I’ve always wondered what the key is to open the box because it’s always been locked to me, impenetrable.

And about his writing process as a young man he reveals:

I was always writing this narcissistic little book in my head. Each moment was a potential vignette, every conversation mined for a savory snippet. Friends formed composite characters in my mind. At first, I had written to lend reason and meaning to a life that had grown chaotic, but the balance had reversed; I began living chaotically simply so that I would have something to write about.

Moments of insight frequently intervene in the narrative:

It was the first true thing I’d said in a long time.

Soon I’d be eighteen. It wasn’t fun anymore, the way I lived my life—it was just exhausting.

I was getting too old for this, I knew, but I couldn’t conceive of a way to stop it.

His flippant tone of voice, his sarcasm and rapier wit, all make for a crisp writing style:

While I’d been in Portland, I’d been invited to join an online group of incoming Vassar freshman; I had traded a series of flip messages with a girl named Annalise von Tegerfelden. Her photo showed her in a leotard, posing in a spectacular arabesque. She’d written that her interests were “ballet and Klonopin,” which I loved.

If there were any criticism I could level at the memoir, it would be the overall structure of the narrative. Much of the memoir is weighted toward Lansky’s addictive slide to rock bottom, his recitation of places, drugs, sexual escapades, friends, leading to a feverish crescendo of dereliction and despair. The coda is a quick resolution: sobriety in San Francisco, a promising if short-lived sober love affair, and the epiphany at a twelve-step meeting, at age 19, that he is finished with his life of self-harm. Lansky states, “It’s over. I’m done. I will never go back there, as long as I live. I will never do this again. I will do whatever it takes. It will never be like that again.”

Perhaps the editors saw fit to encourage Lansky’s skill as a writer—which is considerable—to emphasize the more obsessive and self-defeating side of his addiction and its sometimes salacious details—but somehow toward the end of his account the maelstrom of drugs and sex felt repetitive, his mea culpas diluted.

Having said the above, I think his is the start of a powerful career. In the writing of addiction and recovery, his is a memorable voice and should be recommended reading for any young person who has struggled to become an adult and overcome their worst fears.