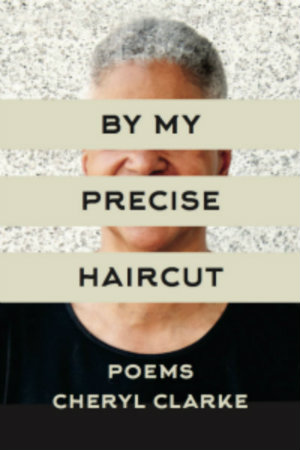 Every month, “Appreciations” looks closely at a poem or poems from recently-published books by LGBTQ poets. Each column celebrates new work by appreciating some of the figurative and formal achievements of these poems. This month’s poem is Cheryl Clarke’s “in this hostile corridor” from her recent collection By My Precise Haircut (The Word Works, 2016).

in this hostile corridor

A quickening
nostalgia suffuses
me this late evening

The marvelous
have been blighted
by a blood-borne

Am dazzled as I face your solicitousness
over the counter of this nasty
KFC:

your articulated brows
mascara the discrete texture
of your facial skin and buffed cultivated nails.

You recognize
me too—
by my precise haircut.

Cheryl Clarke’s “in this hostile corridor,” from her collection By My Precise Haircut, is a humble, vulnerable poem about brutal things. Throughout the collection, rich in witness and tribute, Clarke conveys a deeply humane respect for her subjects. Both urgent and spare, “in this hostile corridor” conveys the power of empathy even in an otherwise ordinary and potentially impersonal moment: ordering at a fast food restaurant.

The brevity of the poem’s line allows the syntax of its sentences to unfold deliberately, often deferring and maximizing their emotional impact. Over the first two paragraphs the speaker describes the complicated longing at the root of what will ultimately prove to be an empowering vulnerability. The suggestive first line—“[a] quickening”—in itself conveys a sense of animating vigor. But as the second line completes the thought, it becomes clear that “quickening,” not a noun after all, modifies “nostalgia,” no mere longing. That it “suffuses” the speaker suggests that this is an active state of being overcome by an emotion that demands attention. And the attention it receives yields an awareness of another kind, as the speaker identifies the urgency of her place in time. Whether literal or metaphorical, the reference to the “fin de siècle” begins the second paragraph by associating this moment with transition and even crisis, a connection reinforced by the fifth line’s consisting of the single word “between.” The full stop at the end of the sixth line enforces a lingering to appreciate the speaker’s paradoxical position in time, bounded by uncertainty, “two endangered sites.” Referring to either the past or the future as a “site” evokes a sense of stable location, a notion undone by her characterization of each as “endangered.” What does it mean to inhabit a present in which both the past and future are “endangered”? An “endangered” past may be at risk of being forgotten. An “endangered” future is one that either the past has compromised or the present may. And so it becomes clear that the “quickening” urgency of this nostalgia results not only from the pain of loss but from a duty to honor that loss while protecting what remains of the possible future.

The next two verse paragraphs identify the source of this feeling of being unmoored in an unstable present—being alive after having lost so many to the early devastating years of the HIV/AIDS epidemic, charged now with bearing their names and legacies into a future made bleaker by their loss. The third verse paragraph begins with an effect similar to the opening lines of the poem. The enjambment between lines seven and eight allows “marvelous” to work for a moment as an adjective anticipating a noun to modify. When the verb phrase follows instead, “marvelous” takes on its role as an abstract noun—the “marvelous” constitute a population of the grand and compelling. The word “marvelous” is rich with an awe that makes the lines that follow all the more painful. The brevity of these lines allows for a stark and emphatic unfolding of the fate that “the marvelous” have suffered. The experience of awe lasts only for a moment, then yields immediately to the assertion that they “have been blighted,” the line breaking in a way that allows the simple fact to stand alone before naming its cause. The passive verb is significant, not only in its casting these fallen marvelous as unwitting, unwilling casualties, but in its allowing for the deferral of the cause. Describing them as having been “blighted” suggests destruction and ruin, rampant and irrecoverable. As the next line completes the phrase, “blighted/ by a blood-borne,” the satisfyingly rhythmic emphasis created by the alliteration is unnervingly at odds with the tragedy of the words’ content.

As the fourth verse paragraph begins, the sentence ends with a single word finally characterizing the antagonist as a “scourge,” satisfying the suspense created by the sentence’s syntax and foregrounding the relentlessness that the word evokes. Following the momentary stillness of the caesura created by the immediate full stop, the tone of the poem shifts once again to admiration and awe, in an apostrophe to a collective “you” that defies the brutal finality of the previous sentence—refusing to allow the prospect of death and destruction, while real, to dominate this story. The more joyfully alliterative, paradoxical phrase “[f]lamboyantly frail” is an immediate rebuke to the brutality of the “scourge,” and it begins a litany of praise that honors the defiant vibrancy of those affected. Even in the weakened body, the spirit remains strong, ostentatious and unashamed. As the next line begins, the adjective “pretty” amends the idea of frailty, by casting it instead as delicate or refined. The additional typographical distance between words in the line enforces a halting, deliberate pace that suggests both wonder and appreciation, even as the spaces themselves stand as visual metaphors of absence. Wherever present, though, they are emphatically “still marvelous.”

The line ends with a shift to the second person perspective, and it becomes clear that the speaker has been directing this praise at a collective “you” whose inclusiveness recognizes that the reach of HIV/AIDS extends across gender, racial, and socioeconomic lines—and that the celebrated “flamboyance” is a virtue that no single demographic gets to own. Breaking the line here allows that collective “you” to gather this praise, before the verb that begins the following line. To “nourish” is not just to feed but to enrich and sustain. And to “nourish. . . failing geographies” is to stand in direct rebuke to the obliteration of a “scourge.” We don’t usually think of “geographies” in terms of success or failure, but if we consider a geography not as a place but as a way of representing places in relation to each other, then a failing geography is not just a community at risk but a threatened system of relationships within and between communities. Survival itself is defiant, but if survival cannot always be in one’s power, then it matters how one survives, not when or how one won’t. To cultivate the flamboyant, the beautiful, the marvelous is to cultivate joy, life, and, in the visible and insistent presence of these, hope. And if we take the context of this moment to be the turn of the last century, we must remember that in those years, longer-term survival was still relatively new.

As the poem continues in the fifth and sixth verse paragraphs, the speaker’s attention shifts from cultural context to the immediate moment—from praise for a broadly-affected group to admiration for a particular individual’s quiet fabulousness. Within the grandeur of an epic battle for personal and cultural survival, comes this moment of both figurative and literal nourishing: the speaker’s interaction with a cashier as she places an order at a KFC. As she addresses the cashier, she continues to use the second-person pronoun, linking the cashier by shared antecedent to “the marvelous.” The pronoun also defers the identification of the cashier’s gender, allowing the praise and wonder to apply as broadly as possible before giving the cashier her full attention as an individual. The speaker is surprised to find herself in awe; she is, she admits,  “dazzled as [she] face[s] [the cashier’s] solicitousness.” The cashier’s attitude has taken the speaker by surprise; this “solicitousness”—the cashier’s sincerity, cheer, and energy in doing her job—is something that the speaker has to “face,” suggesting that the cashier’s attitude is unexpectedly eager and not merely perfunctory. Echoing the speaker’s use of the word “pretty” earlier, the sixth verse paragraph itemizes features of the cashier’s appearance. From her “articulated brows” to her “buffed cultivated nails,” the lack of punctuation before this list ends casts the entire description—brows, mascara, skin and nails—as comprising a single effect. It is one that signifies not just care and dignity but style.

But ending here, by witnessing the cashier’s determined vitality, would not have addressed the poem’s opening dilemma. Instead, Clarke ends the poem by imagining the cashier’s point of view: “You recognize/ me too.” In realizing that she, too, has been recognized, the speaker experiences an intimacy, however fleeting, that answers the seemingly-lonely imperatives of the poem’s beginning. Neither preservation of the past nor stewardship of the future will happen in isolation. To be visible to each other— whether by a “precise haircut” or other means—is to nourish survival.

May We Present... Nicholas Wong's Besiege Me
I Love Bey
Marga Gomez: On Perseverance, Storytelling, and Writing Her New Show, 'Lovebirds'