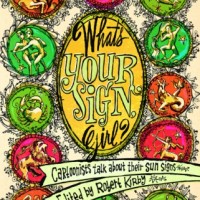 Who amongst you is not vulnerable to glancing at your horoscope when it beckons you from the break room newspaper? Who of you has resisted clicking on your sign when it tempts you from a blinky astrological online pop–up? C’mon, admit it, at least once you’ve scoped out your future in the stars in a magazine at the laundromat, only to discover the perfect monthly prediction you read was from… 2010.

Humans love to learn more about themselves, and whether we believe in astrology as whole-heartedly as Nancy Reagan or read it for a laugh to start our day, most of us are suckers for checking out our sun signs and the influence of the celestial bodies over our heads.

And that is how most readers will approach Rob Kirby’s latest comics collection What’s Your Sign, Girl? Ideally, readers would pause for a minute to find their sun sign on the exquisite, midcentury modern cover by Michael Fahy, shadowed on the back cover with some interesting tools of creation or destruction, aligned with these signs. (Does the water faucet line up with Aquarius? And which sign is the douchebag?) But I know most readers will flip straight to the chapter that covers their sun sign and read that first.

Although Kirby credits Linda Goodman’s iconic Sun Signs as an influence in his collection, this book is a bit different. Each creator here writes about his or her own sign, but they’ve all chosen different approaches. Some, like Goodman, share good and bad attributes and behavioral traits. Others recount stories related to their signs. Some even express their disbelief in astrology as a whole.

Rob Kirby’s coverage also shares his inner debate about Virgo characteristics; both ones he loves (“We’re total critics.”) and ones that frustrate him (“‘Fussy, prissy and dogmatic’–But I’m not like that, am I?”).

Cartoonists Aron Nels Steinke (Aquarius) and Dan Mazur share life stories that illustrate how they do or don’t match up with the characteristics of their signs. Erik Kostiuk William’s psychedelic piece on Scorpio wraps the features of the sign around readers in a way that they will feel the attraction and resistance to the venomous stinger of the arthropod themselves.

Tyler Cohen and Rick Worley’s comics focus on their lack of belief in astrology. Cohen initially thought astrology was “patriarchal clap-trap,” but after living in San Francisco, her belief/disbelief becomes part of the duality of her crab sign Cancer, and she concludes, “I guess I’ll keep walking sideways.” Worley struggles with OCD, which makes him see why people adhere to systems that help explain the unknown or give order to chaos. “Astrology might say my obsessions with controlling my environment has something to do with being a Libra…” he admits, “but I’m much too smart to allow my life to be defined by some fake, contrived system.”

This compilation’s topic and sharp design make it irresistible to peruse.

And it would make a great quirky birthday or holiday gift for that someone who has everything–because they’re bound to have an astrological sign too.

Saleem Haddad: On the Arab Spring and Writing About the Queer Arab Experience
A Poem by C. Russell Price
Judith Katz and Hilary Zaid on Inheritance, Influence, and the State of the 21st Century Lesbian Nov...