Lambda Literary has received a major gift commitment of $1 million, the largest in the organization’s history, from Mr. Chuck Forester of San Francisco. The gift will be used to further the work of Lambda Literary on behalf of lesbian, gay, bisexual, transgender and queer literature. The gift will also establish the “Forester Fellowship,” an annual, juried cash prize to a promising LGBTQ writer.

The gift was announced at a cocktail reception on Sunday, September 20th at Mr. Forester’s home in the Alamo Square neighborhood of San Francisco at which Mr. Forester, and Lambda Literary Executive Director, Tony Valenzuela, used the occasion to officially launch the Lambda Literary Legacy Circle, a planned giving program to which Mr. Forester’s $1 million gift served as the celebratory introduction. Acclaimed authors Kevin Sessums and Trebor Healey and poet Baruch Porras-Hernandez were on hand as featured guest readers at the reception.

“This transformational gift is an endowment in the long-term future of Lambda Literary’s industry-leading programs that serve LGBTQ readers, writers and publishers,” said Valenzuela. “The establishment of the Forester Fellowship will be an unprecedented professional boon for its annual winner that will allow the selected author financial security and uninterrupted time to finish their next book.”

The annual “Forester Fellowship” will be the largest cash prize in the world offered to LGBTQ writers and follows a series of other cash prizes that Lambda Literary already offers including the Lambda Literary Emerging Writer Award and the Dr. James Duggins Outstanding Novelist Prize.

“I grew up in the 50s and homosexuality was so heinous a crime people were afraid to say the word, and it filled me with misconceptions about LGBT people and fears of being discovered as an adult,” said Mr. Forester. “A novel by John Rechy about a drag queen and LA hustlers told me gay men were real people, and for the first time they were people like me with whom I could relate. I’d found a home–in literature. Years later, with the onset of AIDS/HIV, I turned to gay mentors who taught me how to process through words the incredible grief I felt as friends died around me every day and I lost my partner of eighteen years. Gay literature saved me twice, and I consider myself lucky to be here today, still reading and now as a novelist.” 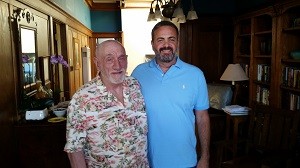 Mr. Forester continued, “I can’t think of a better way of thanking the community for what its writers have given me than by providing a fellowship to a promising LGBT writer. I’ll be joining other generous donors who agree with me that our books tell us about who we are and where we come from as they celebrate our beautiful peculiarities.”

Chuck was born in Wisconsin and went to college at Dartmouth and graduate school at Penn followed by two years in the Peace Corp in Chile. He came out in San Francisco in 1972 and has been living with HIV since 1978. He’s been active in the LGBT community for decades, first as a board member and then chairman of the board of the Human Rights Campaign Fund (now the Human Rights Campaign). He also led a successful campaign that raised $3.2 million for what is today the James C. Hormel Gay and Lesbian Center at the San Francisco Public Library, a first of its kind collection in a public institution that continues to serve a world-wide audience of readers and scholars. He has published a memoir Do You Live Around Here? and is currently working on a novel.

“Chuck has been a stalwart supporter of Lambda Literary for more than a decade and has worked as a close ally and advisor during our recent period of unprecedented growth,” said KG MacGregor, Lambda Literary’s Board President. “This gift signals Chuck’s strong belief in our mission and in the bright future of storytelling by lesbian, gay, bisexual and transgender authors.”