William Burroughs’ “Word/Image novel” to be published by Fantagraphics

William Burroughs’ “Word/Image novel” to be published by Fantagraphics

According to the Gaurdian:

The Naked Lunch author began work on Ah Pook Is Here with artist Malcolm McNeill in 1970, when the story appeared as a monthly comic strip in the English magazine Cyclops. After the magazine folded, they worked to develop the concept into into a full-length book, which they dubbed a “Word/Image novel” because the term graphic novel had yet to be coined. But no publisher was interested, and after working on the book for seven years the pair eventually abandoned it.

The graphic novel sees Burroughs tell the story of billionaire newspaper tycoon John Stanley Hart, the “Ugly American” or “Instrument of Control” who is on a quest to discover the secret of immortality. He uses a formula he finds in ancient Mayan books to create a “Media Control Machine” using images of Fear and Death, but ends up getting on the wrong side of Ah Pook, the Mayan Death God.

Sketches and drawings by Malcolm McNeill were exhibited in 2009 and 2008 at Track 16 Gallery in Santa Monica, CA and Saloman Arts Gallery in New York City. [Images via, via.] 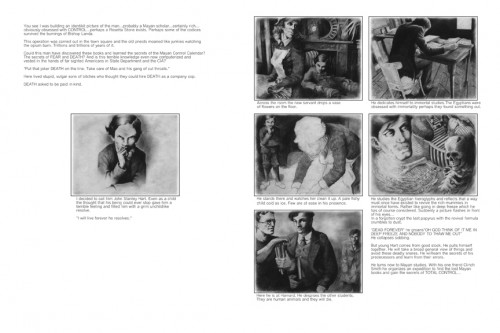 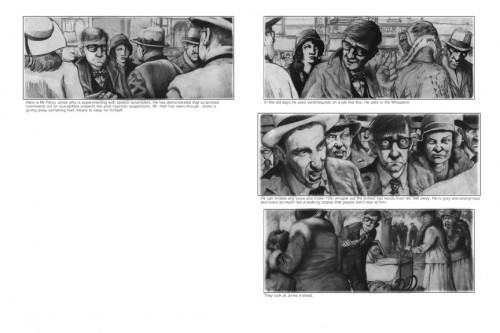 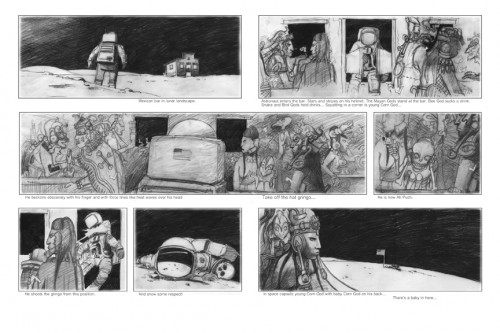 In 1994, British filmmaker Philip Hunt directed an animated short of based on Ah Pook Is Here using recordings of Burroughs’ album Dead City Radio released by Island Records in 1990. Burroughs dedicated the album to Keith Haring. Hunt uses track number 4 “Ah Pook the Destroyer/Brion Gysin’s All-Purpose Bedtime Story” as the background for his award winning film which is now—according to IMDB—part of the permanent collection of the Goethe institute.

—Perhaps the most beautiful 6 minutes you’ll experience all day.