‘Vera’s Will’ by Shelley Ettinger

‘Vera’s Will’ by Shelley Ettinger 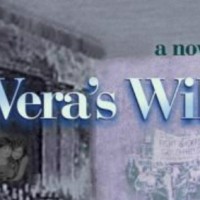 “Don’t go. Let me show you what it looks like when surrender, and an instinct not to, live side by side.” —Carl Philips

Shelley Ettinger has written a masterful novel. There are few in this world who can sustain the long, multi-generational, multi-perspective, multi-country narrative form, and she is one of them.

Vera’s Will follows the story of Vera and her family, through her immigration to the United States from Russia following a devastating attack on her Jewish neighborhood, her life in New Jersey, and her love affair with her childhood best friend, Mary. After Mary succumbs to influenza, Vera realizes that her identity is not one that can be safely sustained in the world she lives in, and the reader is lead through the journey of her hidden life. Rife with tragedy, beauty, secrecy and survival, the novel is told from the perspectives of Vera herself and her young great-niece, Randy.

What is additionally spectacular about the novel is the sheer amount of ground it covers in four hundred pages. Not only do we get to accompany Vera and her niece on a journey that spans immigration and industry; we are able to see the dramatic shift in life for LGBT communities at the turn of the twentieth century, in stark contrast to Randy’s world decades later. The novel is a fascinating look at the life of an extraordinary woman, yes, but it is also a story of ancestry, mentorship and pioneerism—one we don’t see often outside of early lesbian literature, besides The Well of Loneliness and Orlando.

The juxtaposition of the two worlds only serves to underscore the poignancy of Vera’s longing and the clandestine nature of the underground community, as well as the radical politics of Vera’s left-leaning parents, who were quite ahead of their time. Without appropriating or diminishing them, Vera is in company with other minorities of her time, and together, they live in the hours when no one else is awake, live off of the meager salaries and portions allotted to their kind, and remain joyous and jubilant amid their circumstances.

Though at times the diction shifts and vernacular can be a little jarring (from Vera’s seamless narrative to Randy’s slightly awkward, tomboyish voice), Ettinger has managed to sew together an exceptionally large blanket of a story, and she has done it well.