‘I Never Promised You a Rose Garden, Part One: My Own Private Portland’ by Annie Murphy

‘I Never Promised You a Rose Garden, Part One: My Own Private Portland’ by Annie Murphy 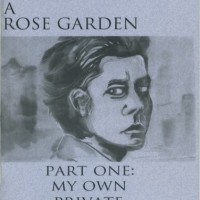 Before Portland, Oregon gentrified to become a suburb of California—before it was known as a green city, a bike utopia or the star of the TV show Portlandia—it was a damp industrial river town with a history that included shanghaiing, racism, redlining, and other dirty little secrets. The title of Murphy’s zine I Never Promised You a Rose Garden alludes to Portland’s nickname, “The City of Roses,” at the same time warning readers this book is not about petals and perfume. “It was 21 years ago this Halloween that we learned the terrible news,” the story fittingly begins. River Phoenix had died in Los Angeles, outside Johnny Depp’s Viper Club, of a heroin overdose on that day in 1993.

Written and drawn in gray, wet, inky washes, reflective of the perpetually overcast Pacific Northwest, Murphy describes the relationships between Phoenix (who was born in Oregon), Keanu Reeves, Portland filmmaker Gus Van Sant, and the city of Portland itself, which culminate in Van Sant’s film My Own Private Idaho. Murphy writes, “Keanu was from the hill, and River was from the streets—that’s how Gus put it. They were an ‘odd couple,’ and as screen stars they competed for attention with a third star of the film: The city of Portland.”

But Portland of the eighties and nineties continued to have some shady secrets: “The rainy gritty grey city attracted street kids from all over the N.W. The winter’s relatively mild. There was a sex shop on nearly every block, and Johns a-plenty. 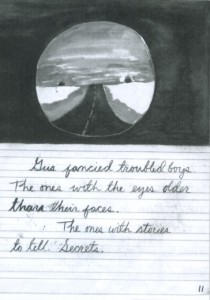 Gus was friendly with many of these young men. Their lives, interpersonal dramas and tribulations were the stuff of dreams for this rich kid from the Portland hills. He interviewed these slick wordsmiths and put them in his movies.” Hence, Portland became known for its sex industry and as a place where boys “could trade their bodies to men for $$$.”

Murphy moves on to describe the riveting campfire kiss scene in Idaho, where the chemistry between a fluid, bisexual Phoenix and an “I’m-not-gay” Keanu Reeves somehow worked: “Did River go in for a kiss only to have Keanu turn from him in the last seconds of the take? It’s hard to tell. Gus must have been head over heels in love.” About Van Sant, she writes, “ I think Gus fancied himself a modern version of his boy-loving, woman-hating, smack-shooting idol, William S. Burroughs.” (The Naked Lunch author acted in the movie.)

Murphy then steps back to observe the scene in Portland, where Van Sant was inviting street boys, along with River and Keanu, into his home: “River’s first time shooting up was during this stay in Portland. The boys absolutely adored Gus, with his money and his camera. He earned their loyalty. It was a mutually beneficial situation.” Then, the view broadens even more to include the author: “Gus had a favorite hunting ground for finding boys and girls (mostly boys) for his films in the 80’s, and that was my school: M.L.C.” 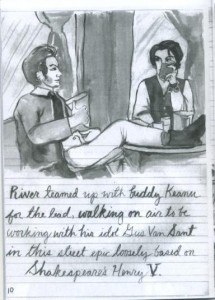 An alternative school, the Metropolitan Learning Center attracted punks, queers and street kids, who watched the filming of Van Sant’s earlier film Drugstore Cowboy outside their school and lined up to drink at the same water fountain where Matt Dillon sipped before the heist scene in the film. More importantly, Murphy went to school there and lived in Portland as a kid. The relevance of the book’s handwritten text (complete with cross-outs and mistakes) and lined school paper—and even its hand-published format—suddenly becomes clear. It amounts to the fourth character in this story being Murphy herself, her perspective that of a gender queer kid stunned to observe all of this. One can sense in her writing about Phoenix the struggles of a kid of both wanting to be with someone so beautiful and wanting to be him, the attraction to these dark events, and the fear of what may and does evolve.

She sums up her story with an observation about Van Sant’s film Last Days, made in remembrance of Kurt Cobain: “Last Days of course memorializes the imagined last days of a rock star whose early demise 6 months later virtually swept River’s death under the rug. River was my Kurt. Not that it’s a contest.”

This crucial, original work relates a local history with candor and insight and is a gem not to be missed. It uses the book’s complete form—its sensitive art, its skilled storytelling, its mistakes and indie structure—to capture a dark tale of youth via the observations of a wise narrator recalling what happened both as an adult now and, uniquely, as a kid when it went down.

I Never Promised You a Rose Garden, Part One: My Own Private Portland
By Annie Murphy
Grimoirepress
Paperback, 44 pp.
May 2015