‘The Argonauts’ by Maggie Nelson

‘The Argonauts’ by Maggie Nelson 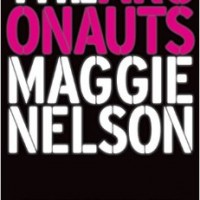 The Argonauts, a slim book by poet and critic Maggie Nelson, contains multitudes. It’s a love letter to her fluidly gendered partner, the artist Harry Dodge. It’s an appreciation of her favorite queer thinkers. It’s a chronicle of first-time motherhood. It’s also the best kind of nonfiction read, the kind that enlarges one’s reading list by half.

One could say it’s dense with critical theory, but that gives the wrong impression. Nelson’s style is spacious, digressive, generous in both the breadth of its reading and its esteem for the reader. She handles references with elegance: instead of footnotes, there occasionally pops up a “Michel Foucault” or “Judith Butler” in the margin. The effect is that we seem to think alongside Nelson; it is easy to follow her anywhere.

The “you” here and throughout the book is Dodge, who is sometimes an object of romantic rapture, sometimes a partner in argument. One of these arguments is whether words can do justice to love without sacrificing its shifting complexity. Nelson, “devoted to Wittgenstein’s idea that the inexpressible is contained—inexpressibly!—in the expressed,” thinks they can. To Dodge, words are “corrosive to all that is good, all that is real, all that is flow.”

Nelson is somewhat swayed by this perspective, but you could read The Argonauts as a sly means of winning that debate: how could anyone dismiss a portrayal of love so bountiful and nuanced? The book’s title comes from an idea of Roland Barthes’s, a take on the Ship of Theseus paradox: “Just as the Argo’s parts may be replaced over time but the boat is still called the Argo, whenever the lover utters the phrase ‘I love you,’ its meaning must be renewed by each use.”

The metaphor of the Argo drapes various subjects throughout the book. Our bodies are themselves Argos, their cells perpetually discarded and renewed even before considering the larger changes life holds in store. One such change is pregnancy, which Nelson undertakes during the course of the book; meanwhile, Dodge is undergoing top surgery and testosterone therapy. In Nelson’s view, the one is about as queer an experience as the other, such is new motherhood’s blurring of identities and bodies, its “eros without teleology.”

As she writes of A.L. Steiner’s photographic series Puppies and Babies, Nelson herself “reminds us that any bodily experience can be made new and strange . . . that no one set of practices or relations has the monopoly on the so-called radical, or the so-called normative.” This statement scans as precise, not fuzzy, preceded as it is by reminders that if queer people “want to do more than claw our way into repressive structures, we have our work cut out for us.”

As Nelson adds to her queer family (including Dodge’s son—stepparenthood also being rather queer), she bumps up against heteronormativity and modern homonormativity alike. She’s worried when Dodge begins to discuss medical transition, worried about the relationship model it might force her into:

You showed me an essay about butches and femmes that contained the line ‘to be femme is to give honor where there has been shame.’ . . . I had never conceived of myself as femme; I knew I had a habit of giving too much; I was  frightened of the word ‘honor.’

On the other hand, there are patriarchy-reinforcing experiences such as a hospital worker commenting on how nice it is to see a father involved with his baby, and the growing sense that her unborn child has assumed more social value than she has:

While discussing a possible placental issue, one doctor quipped, ‘We don’t want that, because while that would likely be OK for the baby, it might not be OK for you.’ By pressing a bit, I figured out that she meant, in that particular scenario, the baby would likely live, but I might not.

Afterward, there’s the pressure of society’s gaze on postpartum women, urging them to get back into shape so that their husbands might once more find them attractive. What Nelson argues for instead of this flattening of the mother’s role is a recognition of “sodomitical maternity,” borrowing a term from Susan Fraiman to describe a mother’s experience of pleasure and access to “non-normative, nonprocreative sexuality.”

That opening sex scene was, of course, up to more than shock value. Nelson has a way of looping back like this and illuminating earlier passages—always treading lightly enough to let readers briefly imagine they’re stumbling upon her audacious connections on their own.

Cliterotica: Fall 2011
'Not Your Villain' by C.B. Lee
Alison Bechdel and Censorship