‘Things Half in Shadow’ by Alan Finn

‘Things Half in Shadow’ by Alan Finn 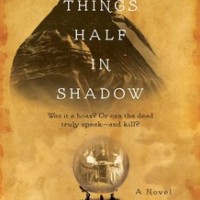 The Spiritualism craze that took hold in the 19th century has been popular fodder of late for TV, movies, and literature. Woody Allen questioned the veracity of Emma Stone’s quirky mystic in his latest rom-com, Magic in the Moonlight, the inaugural season of Showtime’s Penny Dreadful featured Madame Kali, a spiritualist and medium who hosted a game-changing séance, and novelist Valerie Martin took on the subject matter in last year’s nautically-themed supernatural mystery The Ghost of the Mary Celeste.

Alan Finn–the pseudonym for out mystery writer Todd Ritter–mines the fertile history of post-Civil War Philadelphia and the country’s obsession with Spiritualism during that period to craft a superbly rich, historically-detailed whodunit in Things Half in Shadow.

Crime reporter Edward Clark–a Union veteran newly engaged to the daughter of a wealthy hat manufacturer–reluctantly agrees to go on assignment for his newspaper to expose the city’s plethora of mediums preying upon the vulnerable postbellum populace. His first target–a plucky young widow named Lucy Collins–proves an easy mark, with Clark immediately spotting the sleight of hand and visual trickery behind her purported communication with the dead.

When Clark promises citywide exposure of her fraudulent brand of mysticism in the following day’s edition of the Philadelphia Evening Bulletin, Lucy proves resourcefully resilient, quickly turning the tables by blackmailing him with exposure of his own secret shame–that he is the son of a disgraced magician imprisoned for murdering his wife during an ill-fated onstage illusion.

Fearing his fiancé’s reaction to his perpetuation of a false identity and the irreparable damage to his reputation, an uneasy truce is struck between the newspaperman and the medium. Lucy’s plan is a simple one: In return for their mutual silence of the other’s secret, she will aid him in exposing all of the city’s mediums, leaving her as last mystic standing.

As all simple plans do, theirs goes terribly awry during their first outing to expose the city’s most well-regarded–and by all accounts, authentic–clairvoyant, Lenora Grimes Pastor, who dies mid-séance. What follows is a masterful whodunit in which history, mystery, and the paranormal intersect in delightful and surprising ways.

Clark and Collins are perfectly cast as likeably frustrating protagonists. Clark, whose life has a carefully manicured air of predictability, finds the perfect foil in Collins to run counter to his stodginess. Collins, who uses cunning and gumption as survival skills, is such a charmingly feisty creation that readers will readily pardon her charlatan ways early on in the novel. The crime solving duo dodge red herrings and creepy occultism, with Finn setting off just enough romantic sparks between the two to hint at future adventures.

Finn lends a strong sense of period authenticity to Things Half in Shadow and his historical detail pays off handsomely. From the horse-drawn carriages traversing gaslamp-lit city streets at night to the appearance of famed circus showman P.T. Barnum, Finn precisely re-creates the nuances of the period on the page. He deftly straddles multiple genres–from historical fiction to mystery to horror–without losing an ounce of cohesion. Ghosts, candlelit séances, hidden tunnels, moonlit cemeteries, masquerade balls, and secret societies are all layered in Finn’s astute mystery to coat the proceedings with an atmospheric veneer of spookiness. One would naturally fear that so many disparate elements might make for a case of literary over-ambition, but Things Half in Shadow is so expertly assembled in Finn’s capable hands that the conclusion is both satisfying and faithful to what’s come before it.

Vince Liaguno is an author and the Stoker Award-winning editor of UNSPEAKABLE HORROR: FROM THE SHADOWS OF THE CLOSET (Dark Scribe Press 2008), an anthology of queer horror fiction. He is a member of the Board of Trustees of the Horror Writers Association (HWA) and member of the National Book Critics Circle (NBCC). Author Website: www.VinceLiaguno.com