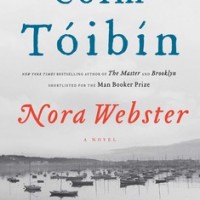 Colm Tóibín’s latest novel, Nora Webster, has landed on multiple best of the year lists. It’s a fitting tribute for a book that is largely about taking stock.

When the novel opens the eponymous Nora is coping with the loss of her husband, Maurice. While the death is recent, enough time has passed that Nora has begun to settle into her widowhood and has turned her attention to the quotidian challenges. Finances are a concern as is the well-being of her four children, two daughters that are away at school and two young boys. Nora grieves, though she is not outwardly emotive. Tóibín’s cool prose conveys a quiet despair as she endures the visits of gossipy well-wishers. When one of those well-wishers brings tidings of good news, Nora’s insular world of grief slowly begins to expand. Before long her facility with numbers secures Nora a place at the firm she abandoned twenty years earlier following her marriage. It’s a mixed blessing, but one that sets her on a path towards healing.

Readers familiar with Tóibín’s work will find familiar themes. For instance, Nora’s oppressive supervisor at Gibney’s bears a resemblance to the strict Mrs. Kehoe from Brooklyn. Like Eilis Lacey, Nora perseveres, but not without asking some fundamental question. At it’s heart, though, Tóibín’s latest novel is a simple story of stepping back from the brink. Nora is a prisoner of her grief, yes, but also a prisoner of society’s expectations of grieving. When she visits her sister, Catherine, Nora is quickly overwhelmed with the machinations of domesticity—in this instance, literally embodied in the process of installing a new washing machine—and opts to take a walk. “‘It’s very showery now,’” her sister says. “‘I’ll find an umbrella,’” Nora replies. “This was what no one had told her about. She could not have ordinary feelings, ordinary desires. Catherine saw this, she thought, and she had no idea how to deal with it, and this made things worse.” The performance of grief must be kept up, however, because an unworlding sense of isolation can return at any moment. Once such relapse occurs while she’s visiting with members of a new music appreciation club she’s joined:

In all this noise and confusion, she felt a sharp longing now to be anywhere but here. Even though she often dreaded the night falling when she was in her own house, at least she was alone and could control what she did. The silence and the solitude were a strange relief; she wondered if things were getting better at home without her noticing. Since she was a girl, she had never been alone in a crowd like this. Maurice would always decide when to leave or how long to stay…. So this was what being alone was like, she thought. It was not the solitude she had been going through, nor the moments when she felt his death like a shock to her system, as though she had been in a car accident, it was this wandering in a sea of people with the anchor lifted, and all of it oddly pointless and confusing.

She’s unmoored in this new reality, and one gets the sense that this is the first time Nora has felt on the outside of social conventions. She’s well knitted into the fabric of the community, and perhaps it’s that intimacy that breeds her quiet despair. How must it feel to be suddenly at odds with your kin? If there’s anything queer about this book, it’s that sense of isolation.

Ultimately, Nora does find a way to navigate the haunted landscape of her life. Tóibín delivers the happy ending here, but as the oft repeated platitude says, it’s the journey, not the destination that’s important for Nora and her family.

'Boy With Flowers' by Ely Shipley
Wishing for Love and Finding Family: An Interview with Naz Kutub about The Loophole
'The Heart’s Invisible Furies' by John Boyne