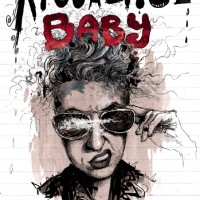 From its opening lines, Apocalypse Baby, the latest from France’s notorious Virginie Despentes (King Kong Theory), establishes one thing: this is a novel about disappointment, disenfranchisement, and disillusionment. There isn’t one character in this raucous chorus of voices who isn’t speaking unabashedly of one or the other, if not all three.

Apocalypse Baby follows Lucie, uninspired and cynical, and the Hyena, ruthless and driven, two ill-matched private investigators, as they search for a wealthy missing teenager, Valentine Galtan. Equal parts social commentary, love story, and mystery, this queer, punk spin on the detective noir genre features a big cast—Lucie and the Hyena seek out a motley crew in their hunt for Valentine—and the characters are what really carry this story. From Valentine’s father (a washed-up, self-important novelist) and step-mother (a pat suburban housewife) to a group of young, poser musicians to Valentine’s Arab-but-hiding-it mother and proud, angry Arab cousin to a wayward nun, Despentes leaves no potential informant out as her protagonists stumble toward their ward. And while this riotous cacophony of personalities can have something of a whiplash effect while reading, it does serve its purpose in creating the dizzy, seething atmosphere that Apocalypse Baby depends on to tell its tale.

Americans are notorious for their insular reading habits (consider the need for Three Percent, a literary website devoted to the ridiculously small number of books in translation published in the United States), but anyone who has dipped their toes into France’s contemporary literary scene will recognize Despentes’ aesthetic as remarkably French: no-nonsense, brash, minimalist, and gritty. This can take some getting used to, but it certainly suits Apocalypse Baby, which is rife with cultural tensions regarding terrorism, immigration, and race—matters that are roiling in France these days.

Apocalypse Baby, in the end, is a demanding read; Despentes’ words, plot, and ideas are contentious, confrontational, and very purposefully so. This is a book written to make the reader think, to challenge assumptions and provide no easy answer or understanding.

Adam Haslett: On Masculinity, Being Fearless, and the Power of Ambiguity
'Between Boyfriends' by Michael Salvatore
"He fit perfectly on me, belly to belly": Krys Malcolm Belc’s The Natural Mother of the Child