Francine Prose: On Her New Historical Novel, Exploring the Psyches of Nazi Collaborators, and Examining Questions of Good and Evil

Francine Prose: On Her New Historical Novel, Exploring the Psyches of Nazi Collaborators, and Examining Questions of Good and Evil

Set in Paris prior to and during World War II, Francine Prose’s historical novel, Lovers at the Chameleon Club, Paris 1932 (HarperCollins), revolves around the lives of those who visit and perform at the Chameleon Club, a kind of burlesque joint/dance hall where “men danced with men, women with women in monocles and mustaches.” Club proprietor Yvonne, a “Hungarian chanteuse” keeps a lizard that matches her outfits; actually, she’s owned several—one died from exertion after being placed on a paisley print.

The lead is Lou Villars, an athlete and one of the first female race-car drivers, who eventually works for the Gestapo. She is also one of the women in “Lovers at the Chameleon Club”—a photograph described in the novel as a “lesbian couple, the pretty girl in the sparkly gown sitting behind her broad-shouldered lover with pomaded hair.” Villars was based on Violette Morris, a historical figure who collaborated with the Nazis. Morris’ story, Prose said, “seemed too good not to tell.”

Lambda Literary talked with Francine Prose—who’s written more than 20 works of fiction, was a National Book Award finalist, and has received numerous grants and honors, including a Guggenheim and a Fulbright—about her latest novel.

The spirit of Hemingway’s A Moveable Feast is felt throughout the book. Which novels influenced you while writing Lovers at the Chameleon Club, Paris 1932?

I read lots of books while I was writing the novel, but mostly memoirs and histories. Books by and about Brassai and Henry Miller, about Paris between the wars, the French Resistance, the 1936 Berlin Olympics, and so forth. One of the things that made the book a challenge to write was that I couldn’t find any literary models, really: examples of a novel that was supposedly a sort of “archive” of “written” documents, each by a different person, all telling the same story. The closest I could find was Nabokov’s Pale Fire, which is why I was so glad when I found that beautiful epigraph by Nabokov—an excuse to have his name in the book. I chose not to go back and reread A Moveable Feast, which I’d loved as a young person (so romantic!) and despised (so nasty and gossipy, so disloyal and ungenerous!) when I reread it as a somewhat older person.

Violette Morris serves as the basis for Lou Villars, the center of Lovers at the Chameleon Club, Paris 1932. How did you learn about her and what made you decide to write a novel imagining her life?

I learned about Violette Morris from a wall text at a show of Brassai’s photographs. The text for the photo, “Lesbian Couple at le Monocle, 1932”—explained that Morris, the woman in drag, had worked for the Gestapo during the Nazi Occupation of France. The rest I found out on the Internet, and the story of an athlete and auto racer prevented from competing professionally because she was a cross-dresser and who was subsequently recruited as a spy by Hitler himself seemed too good not to tell.

Villars—who tortured people for the Gestapo and revealed the end of the Maginot line to the Germans—is easily manipulated. It seems she could have just as easily joined the French Resistance if she’d had someone guide her in that direction. Was the sometimes-circumstantial nature of evil an idea that you wanted to explore? 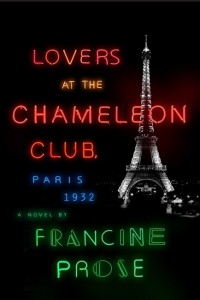 Lovers at the Chameleon Club, Paris 1932

What a great question. I think that she—that is, my character—felt so despised, so lost, so unloved, and so cruelly prevented from doing what she really wanted (and being who she really was) that she could have been recruited by any side that made her feel valued and important. There’s a wonderful quotation from St. Theresa of Avila, I’m probably misquoting it, but it’s something like “In those days I would have followed anyone who offered me a sardine.” I think Lou was vulnerable in just that way. All it took was the right (or wrong) sardine.

The exploration of Lou’s psychological motivation, as well as that of other characters, seems similar to the deconstruction of motive of reformed neo-Nazi Vincent Nolan and Holocaust survivor Meyer Maslow in A Changed Man. What sort of thematic connections do you see, if any, between the novels?

Well, both have the Holocaust, to a certain extent, in their backgrounds; both are about survivors, and more importantly, both are about matters of conscience. What makes people decide and act for good or evil? And old and unanswerable question, but endlessly fascinating.

The novel is a variation on a Rashoman’s tale with multiple voices and writing styles, fragments of a journal, a biography, letters, along with the historical record. As a novelist, how did you find working within this structure?

I won’t lie: the structure made it very difficult. All the narrators have competing versions of the truth, and each was so persuasive (at least to me) that I often found it hard to keep track of what “really” happened.

What are working on now?

I’m working on a novel that begins backstage at a children’s theater production of a heartbreakingly terrible musical about a monkey.