The Lives of Angels

The Lives of Angels

Aside from the lgbt books that crossed my path recently, one book, The Lives of Angels by Emanuel Swedenborg, caused me to look twice.

Emanuel Swedenborg (1688-1772), the Swedish mystic who claims that he was guided by God to visit the realms of the afterlife in spirit form, wrote volumes on what lies beyond this life. Among his many books, The Lives of Angels (Swedenborg Foundation Publishers) posits the premise that there’s a cosmic sex in the afterlife but only among married (heterosexual) couples. Of course, in the 18th century, there weren’t any spiritual writers of note willing to go outside the bounds of heterosexual marriage when it came to theological musings about sex in the afterlife.

This is what Swedenborg reports that an angel told him during one of his heavenly tours: “All men who are newcomers are examined, as they come up towards heaven, to see what kind of chastity they have. They are brought into the company of young women, heavenly beauties, who sense from their tone of voice, their speech, their eyes, their body language, and the aura they emit, what kind of people they are in regard to their love for the opposite sex. If they are unchaste, the young women flee and tell their companions that they have seen satyrs or priapuses. The newcomers themselves change as well, and to angels look all hairy, with feet like calves’ or leopards. Before long, they are expelled so that their lust will not pollute the region’s aura.” 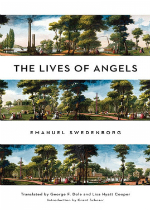 Swedenborg says that married partners experience the same love in heaven as they did in life, only it is stronger with greater feeling and sensitivity. What comes from sexual intercourse in heaven, however, is not the birth of children, but spiritual offspring. “The marriage of goodness and truth is a marriage of love and wisdom, and love and wisdom are the offspring of this marriage. Since in this situation the husband is wisdom and the wife is its love, and since both are spiritual, the only offspring that can be conceived and born are spiritual.”

That’s not all: rather than the letdown that usually follows human (earthly) intercourse, in heaven there is only a cheerful “constant flow of new vitality” that refreshes and illuminates the couple. Swedenborg also reports that there are various levels of heaven, and that there are cities, towns, magnificent houses and palaces.

If the Swedish mystic were alive and writing today, what would he say happens to gay people when they make the transition to the afterlife? Would he say that they (we) undergo a metamorphosis to a heterosexual state of being in which they (we) find the opposite sex beautiful and attractive? If only it were possible to bring back Swedenborg so that he could elaborate on this idea. One thing strikes me about the angel’s scenario: if the offspring of the celestial married couple in heaven is purely spiritual, how different is that from the present time non-physical “offspring” of committed gay couples (which might be described as intense spiritual vibrations) as a result of the sexual act? Promiscuous couples aside, wouldn’t the spiritual (psychological) offspring among committed gay couples be something like the spiritual offspring of heterosexual couples in heaven? If physical commingling in heaven produce only a greater spiritual union among couples—as opposed to children—couldn’t that work for same sex couples as well?

Swedenborg continues: “In heaven they [men] do not even know what infidelity is. They do not know that it exists or that it is possible. Unchaste love, extramarital love, chills an angel’s whole body, just as chaste love, marriage love, warms an angel’s whole body. For men, their nerves sag at the approach of a prostitute and become excited at the sight of their wives.”

Another noteworthy book is Culture Wars, The Threat to Your Family and Your Freedom (See Sharp Press), by Marie Alena Castle. Castle’s book is full of valuable insights, especially when 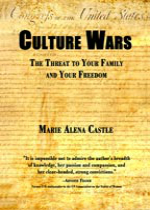 she catalogs the downside of religious encroachment into public life. She writes about the political power of religion, even with small sects like Christian Science. She includes a history of the Religious Right, a chapter on “Women and Religion,” about the constitutionality of graven images on public—even government—property. There’s a chapter on scientific knowledge and stem cell research; death with dignity and end of life decision making, chapters on theology based health care, homelessness and property tax exemptions. Her take on how the religious Taliban mindset destroys civil liberties in the secular realm is worth reading, and her references are clever and diverse, such as when she quotes Lutheran theologian Martin Marty: “It is the role of unbelievers to force religions to be benign.”

In the chapter on “Women and Religion,: Castle quotes Christopher Hitchens on Mother Teresa, namely that she “spent her life opposing the only known cure for poverty, which is the empowerment of women and the emancipation of them from a livestock version of compulsory reproduction.” Thinking that Mother Teresa could just walk away from the canons of Catholic theology is naïve at best. Had she accomplished this U-turn she would no longer have been Mother Teresa, but Mother Margaret Singer, or Mother Kate Millet. The author is also disappoints when discussing theological subjects, such as when she attempts to understand Original Sin: “The Original Sin story really is just a religious fable, very likely created to explain why life is hard, bad things happen, childbearing is difficult and, less admirably, to justify male ownership and subjugation of women…” This is pudding crust ideology, great when critiquing secular inequality but not so great when challenging complex theological beliefs.

Her critique of celibacy in the Catholic priesthood is practical and sensible, especially since celibacy was not the norm in the early Church but developed in the West only. Whether a married priesthood would have prevented the clergy abuse crisis in the Roman Church is anybody’s guess. Years ago I heard a learned Catholic priest try to make sense of the crises, and his views concurred with Castle’s. “It’s easy to sense here the unrelieved loneliness of a dedicated priest who entered the ministry too soon to know what he would be sacrificing. Where do such men go if the loneliness becomes unbearable? To prostitutes? To vulnerable altar boys? There is no ‘sunshine of love and sympathy’ there, only the ‘sloppy fusion of genitals’ (as I once heard it so graphically described). This is very sad.”

I can attest that as a young Catholic grade school student there was considerable pressure in the fifth and sixth grades for boys to consider entering the seminary. At least once a month a priest or brother from various religious orders would give pep talks to the boys in my parochial school. The speakers wore a variety of habits, from grey robes etched with crucifixes and the Star of David, to the conventional brown habits of the Franciscan friars. Very often we fifth grade boys graded the various visitors on the style of their habits (I know I did). At the end of each talk we were obligated to fill out forms so that we could receive “vocation literature” in the mail. The idea was to enter a high school seminary after eighth grade graduation and begin the slow preparation for the priesthood sans experiencing adolescence and the hormone-laced teenage years outside a controlled environment.

Generally, the boys who followed this path had no idea of the power of burgeoning sexuality that would come to haunt them after ordination