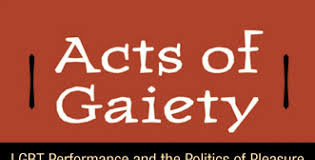 ‘Acts of Gaiety: LGBT Performance and the Politics of Pleasure’ by Sara Warner

‘Acts of Gaiety: LGBT Performance and the Politics of Pleasure’ by Sara Warner 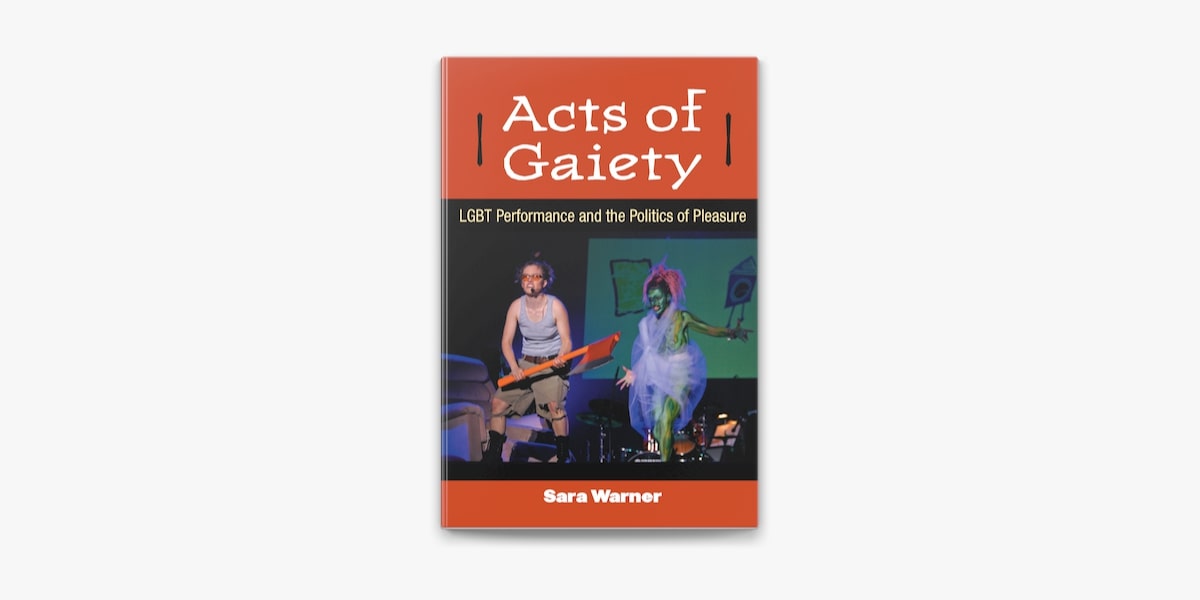 Last year the world was captivated by the brazen acts of the Russian group Pussy Riot, whose “Punk Prayer” landed them in jail and at the center of a political firestorm. But Pussy Riot’s actions, while a deliberately outrageous reaction to the misogynist strictures of Putin’s Russia, are not unique. Indeed, as Sara Warner explains in Acts of Gaiety: LGBT Performance and the Politics of Pleasure, there is a genealogy of riotous performance history that illuminates and contextualizes this recent, international act of subversion, allowing for a richer understanding of both the act and its significance in terms of feminism, heteronormativity and heteronationalism, and performance.

Warner is invested in a composite “silly archive of feeling,” to borrow terms coined by Ann Cvetkovich (“archive of feeling”) and Lauren Berlant (“silly archive”). Specifically, she is interested in the cultural idea and political capital of “acts of gaiety,” which she defines as  “playful methods of social activism and mirthful modes of political performance [including ‘zap actions, pageants, parades, spectacles, kiss-ins, camp, kitsch, and drag’] that inspire and sustain deadly struggles for revolutionary change” (xi). Even though scholars have taken “the  affective turn,” with her focus on gaiety Warner situates herself in contradistinction to antirelational theorists—those in the queer academic community like Lee Edelman and Leo Bersani—who glorify and revel in negative affects, most prominently “shame,” which has been the Baudelairian darling of queer scholars for the past fifteen years.

The emphasis on revolutionary change, for Warner, is critical. The LGBT community, she laments, has become too complacent in its politics of assimilation. Like many queer scholars today, she works from Jasbir Puar’s indelibly popular “homonationalism” to propose her own term that signifies the community’s satisfied assimilationism: “homoliberalism,” defined as

“the economic, political, and social enfranchisement of certain normative-leaning, straight-acting homosexuals at the expense of other, inassimilable sexual minorities” (xi).

Acts of gaiety are not only counterintuitive but also counterproductive to those within the LGBT community who desire the aforementioned forms of enfranchisement. Here Barney Frank’s criticism of a 2009 Gay Rights March—”The only thing they’re going to be putting pressure on is the grass”—ring in my ears. The political economy of enfranchisement demands efficacy. Accusations of “irrelevance” emerge during these highly Nietzschean acts, similar to those accusations faced by those who spend their time in the literatures and arts. For Warner, however, acts of gaiety do have a multifunctionality, as well as a politics. She proposes “a counterpolitics of gaiety,” “ludic antics by lesbian feminists as vital strategies of resistance to homoliberalism’s attempts to organize LGBT lives toward nationalist ends” (xxii). Through her reading of a handful of dramatic acts—including “Valerie Solanas’s ‘scummy’ events, anti-marriage zaps by lesbian feminist collectives, Jill Johnston’s gestures of joker citizenship, Hothead Paisan’s terrorist threats, and the Five Lesbian Brothers’ cynical tendentious jokes” (xv)—she presents a survey of lesbian performance activism from the 1950s through the early 21st century that demonstrates this counterpolitics.

Whether a product of scholarly methods or not, the acts Warner intends to analyze in each chapter are articulated as less in the vein of the individual event and more along the lines of a linear narrative of contiguous events, which, for theater scholars, begs the question of what precisely is the temporality of “the act.” This is particularly the case with her first chapter on Valerie Solanas, overall a magnificent reading—the first critical analysis of— Solanas’s dramaturgy within the conceptual framework of the “Theater of the Ludicrous,” but a chapter that also undeniably indulges in the social contexts of Solanas’s “Scummy Acts,” specifically that of her fraught relationship with Andy Warhol. In this regard the “Scummy Acts” appear to be more a consequence of context than text. At the same time, it’s impossible for the reader not to want to indulge in the gossipy details of Solanas’s life, especially since both she and her work have fallen into disrepute in recent years (with a tribute event to her in San Francisco cancelled last month because of, let’s say, sensitivities to her work).

As a piece of queer scholarship, Warner’s text is not only extraordinary for its valuation of joyful affects but also for its attention to lesbian subcultures. The juxtaposition of two lesbian theatrical performances—of Animal Prufrock’s adaptation of Hothead Paisan at MichFest and the Five Lesbian Brothers’ Oedipus at Palm Springs—in chapters four and five remind us of the diversity and creativity of lesbian theater. Warner actually reads Animal’s adaptation of Hothead to the stage as a disappointment for its “domesticat[ion] and defang[ing]” of this cult classic; instead of reveling in Hothead’s terrorist qualities it “conscript[s] Hothead to the cause of homonationalism” (161). At this point in the chapter Warner tropes Halberstam’s “queer art of failure” to argue that the performance shows its “vitality” in its failure (162). Yet Warner herself fails to clarify how failure is a form of gaiety, which arguably is antithetical to her overarching project of elevating joyous affects. This contradiction is reinforced in the conclusion of chapter five, in which she contends that “we lesbians have come to take ourselves too seriously” (188). If this is in fact the case, how much of a failure was Animal’s decision to focus on “Hothead’s sexual escapades” and “the cute and cuddly antics of Chicken the Cat” (160)?

The larger point is that the repertoire of “acts of gaiety” could in fact be expanded to include even “gayer” acts than Warner includes in her book. That said, Acts of Gaiety is a wonderful reframing of the politics of pleasure, away from self-indulgent negative affects, in contemporary queer studies.