‘Gay In America’ by Scott Pasfield

‘Gay In America’ by Scott Pasfield

For gay men living in gay-friendly-cities, this book is a reminder of what it’s like to be a gay man in the rest of America. For gay men—young or old—struggling to come out, stay safe, and/or handle unaccepting family members, this book may be an inspiration. It’s a paper version of the entire “It Gets Better” YouTube campaign. In fact, when I’m done writing this review, I think I will ship my copy to my high school library (Alhambra,CA) for young, confused gay men to discover. Congratulations to photographer Scott Pasfield for his contribution to helping gay men—even just a little—from another day of feeling alone.

Annoyed that I kept repeating “gay men?” Well, I did it on purpose.  The title is Gay In America, so for some silly reason I thought that would mean all of America—including women. I searched and searched but according to Mr. Pasfield’s book, being “gay in America” only applies to men.

Does it matter? Yes. We live in a sexist world that relegates women to second class status in political, social, and economic ways. Lesbians? Third class, maybe. Can’t we at least create an equal world on the book shelf? If a book about men and women is not what Pasfield wanted to make, which is obviously the case, then would it have killed him to title the book honestly? “Gay Men In America” works just fine.

A terrible mistake, because the book is otherwise satisfying. So let’s move quickly to the featured men and their unique stories. Pasfield found a diverse group of men including happily-single men, long-term couples, and men who live in satisfying groups of three. Widows, divorced-and-now-gay-men, and young men just starting out are included too. With each portrait is a story, and Pasfield deserves credit for including many sad ones. Life is not an RSVP cruise for some of the men featured here.

Don’t miss John from Omaha, Nebraska. His story about coming out to his kids summons tears and smiles. Favorite line: “Love wins!” Spend time with the story of Kevin and Mark from Kearney,Missouri, and their passed-away ex-boyfriend Chris. It’s strange, heartbreaking, and hopeful. 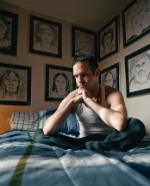 What about the pictures?  They’re fine, just fine. Pasfield knows how to use his artificial lights to fill a scene with even illumination. He knows how to crop a portrait to accentuate the beauty of a man’s eyes or jaw. Surprisingly, where the men found strength to tell their stories warts-and-all, Pasfield scrubbed his photographs clean in post-production. The result is nice. The men are almost all handsome in a blue-collar and bear-ish way. Skinny and muscular are both out. Ethnic diversity is in (thank god). Gay America is so often white America, at least in popular media, Pasfield deserves credit for including many different types of Americans.

I mean it when I say I’m going to donate my copy to Alhambra High School’s library, the place where I sat often confused by the life ahead of me. Gay young men will find comfort in this book, so I will add an inscription in the front, a note to young gay women who will find it. “This is just one book,” I will say. “Don’t take it personally. You exist and you are important.”