Well, debauched and smutty readers, it’s been a slow summer for lesbian erotica. You probably noticed, because I’m sure you’ve been checking LamdaLiterary.org every day just in case, that there was not a summer Cliterotica roundup. Though there were some fantastic releases this spring, I couldn’t hunt down any titles that were released over the summer.

If you have lesbian erotica books released in the last six months that I haven’t seen, please do get in touch with erotica [at] lambdaliterary.org and I’ll be happy to take a look at it.

So, what’s new this fall? Thankfully, I have a handful of titles to pass along to you. 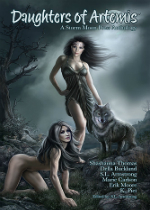 Storm Moon Press is a relatively new publisher, and one of their first anthologies is the lesbian werewolf collection Daughters of Artemis. The beastly nature of these stories surprised me, and when I got deep into the characters and plots I felt a connection to my own animal nature.  Lesbian sex can certainly bring out the lusty, raw animal, and this collection pulled deeply on those tropes. Though we usually see werewolves as alpha males, there are plenty of alpha females out there and many have just as much command and demand. 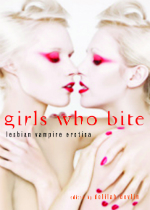 I am not usually one to be seduced by vampire stories. Sure, I am a sucker for True Blood, and I will admit to being enamored of Anne Rice years ago, but it’s not enough to just insert blood lust into a story and let it be the excuse for plot or consciousness (hello, book that starts with T and rhymes with “kwylight”). Girls Who Bite, however, does not use its supernatural elements without care and intention. The women in this book are lusty, deliberate, cunning, and mischievous, sometimes to the point of casting spells to entwine the one they want, sometimes desperately losing control in the heat of passion. Even if you aren’t a vampire fan, the metaphor of desire, draining another, and sinking your teeth in will resonate. 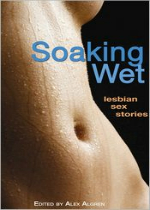 Soaking Wet is a little tease of a book: with only five stories, it gets you hot and bothered, and ends before you can really get it on. Still, it’s an impressive and notable collection, featuring a great beach story by queen of erotica Rachel Kramer Bussel, a sexy trans story at the Folsom Street Fair by Aimee Pearl, and a great gay boy cruising in the woods story by Lee Cairney. I will certainly keep an eye out for more of these author’s works, and go back to this collection when I need a quick and dirty read

Take Me There: Trans and Genderqueer Erotica 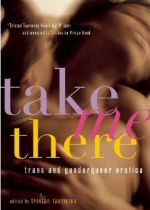 Influential and experienced erotica anthology editor Tristan Taormino has put together a new collection of cutting edge work in Take Me There: Trans and Genderqueer Erotica. It’s not a lesbian collection, one could argue—it is more broad, and more radical, than that. It features authors that any erotica reader would recognize and most queers would swoon over in an all-star lineup: Kate Bornstein, Patrick Califia, S. Bear Bergman, Ivan E. Coyote, Julia Serano, Laura Antoniou, Helen Boyd, Rachel Kramer Bussel, Toni Amato, Gina de Vries, Tobi Hill-Meyer, Kiki DeLovely, Andrea Zanin, and many more. I will confess I have my own story included in this anthology, so you might think my opinion is biased, but I don’t sing praises for books that I don’t stand behind.

From the opening stories—Gina de Vries’s sexy “Cocksure” and the tender, new, unsure explorations in Rahne Alexander’s “Now, Voyager”—through the middle (ahem, the climax) of the book with Julia Serano’s “Small Blue Thing” and “Punching Bag” by Rachel Kramer Bussel, through to the very end with heavy-hitter Laura Antoniou’s revival of her character Chris Parker from her Marketplace series in “The Man with the Phoenix Tattoo” and one of my personal favorites, Patrick Califia’s “Big Gifts in Small Boxes,” this collection is nothing short of magical. I wish I’d had it ten years ago while I was figuring my own genderqueer sexualities out, and I am thrilled for the folks who can finally find themselves in the pages of an erotica anthology, after so many binaristic and polarizing male/female gay/lesbian restrictions in the erotica world.

'Down to the Bone' by Mayra Lazara Dole
BookLovers: Magical Thinking
Honey Literary is Seeking Submissions From QTPOC Writers