‘Looking for a Kiss: A Chronicle of Downtown Heartbreak and Healing’ by Kate Walter

‘Looking for a Kiss: A Chronicle of Downtown Heartbreak and Healing’ by Kate Walter 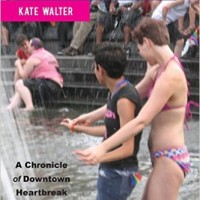 Kate Walter is fifty-seven when her partner of over a quarter of a century, Slim, dumps her. Beyond the obvious emotional pain, she must power through a terrible financial blow (her partner’s savings made up their retirement fund), an annoying legal untangling (they had registered as domestic partners), the general insanity that is navigating the New York lesbian dating scene, and having to see (or hear about) Slim practically wherever she turns, including online, where her ex laughingly has a profile that says she is “looking for lasting love.” Walter, a longtime essayist, fills her memoir with intelligence, occasional flashes of humor and rich detail. Her experience makes for a most entertaining soap opera. Writer Susan Lander calls this “the queer, low-budget Eat, Pray, Love,” but I thought it was more like an older, wiser, lesbian Sex and the City. I kept wanting to know what would happen next and wanted Walter to find her Princess Charming or at the very least that kiss. Of course, it’s understandable that Slim would not come across good here, but I felt that the negativity needed to be balanced with more scenes of Slim being loving. I never got a strong enough sense of Slim’s personality before the breakup, and without that, I found it hard to fully absorb the weight of Walter’s loss. Walter also has a tendency to overuse the adjectives “hip” and “funky” and there is way too much discussion of Slim’s mental state, which only serves to make Walter look stuck on a partner who is clearly not worth it. I rather would have seen more passages like the following, which gives us a window on what it’s like to survive a brutal breakup and shows Walter at her most vulnerable:

Another night, I had a vivid dream. I was lying in bed trying to fall asleep and suddenly it felt like Slim was hugging me. We were on the couch at her apartment and she had just come from the bathtub in her robe and we were about to make love. … I knew I was dreaming, but I willed this hug to continue a bit longer because it felt so comforting. When I woke up, I felt so bereft without her.

To find some peace following the breakup, Walter becomes “a spiritual and self-help junkie,” as she describes it, and whether you enjoy that part of the book or not depends on how much you believe in those sorts of things. In the long run, though, Looking for a Kiss isn’t really about spirituality or self-help or one bad girlfriend or a bunch of crazy dates or even that kiss. It’s about one woman’s herculean attempt to thrive in the face of tragedy and an uncertain romantic future. Reading this book will give singles of any age or orientation inspiration. There are life-changing lessons to be learned about the art of moving on from Walter’s complex, painful and ultimately rewarding journey.

Polar Vortex Explores the Tensions of Middle-Aged Domesticity
Carrie Brownstein on Her Forthcoming Memoir, Best Lesbian and Feminist Books of 2013, and Other LGBT...
The Banal and the Profane: Sarah Sarai