Wilde and his friends confronted a rigid morality by writing a “story so pure in its reveling in homosexuality that it was not just pornography but a rally cry for how they wanted to change society.”  Macy’s challenge, no mean feat, was “staying true to (the story’s) sexual liberty without descending into smut.”  He does so with luscious language and page after page of sensuous pen and ink drawings.

The story concerns itself with Camille, a young man from a comfortable family, who hears Teleny, a genius pianist, performing at a concert. Listening to Teleny he imagines being in the Alhambra surrounded by “the luxuriant loveliness of its Moorish masonry.”  The images change to the sands of Egypt where Hadrian stands disconsolate at the loss of Antinous. Camille’s attraction to Teleny is immediate. As the pianist’s notes “seemed to be murmuring in my ear with the panting of an eager lust and the sound of thrilling kisses,” Camille turns his head to see Teleny looking at him. “I gasped for breath, my veins were swollen . . . Then a heavy hand seemed to be laid upon my lap; something which clasped and grasped, and made me feel faint with lust.” 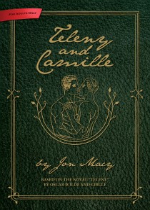 Later, Camille overhears Teleny talking with friends and fellow musicians. He says his performance was his finest because he felt someone was listening. Not the usual audience members but a “sympathetic listener.”  When he describes his feelings about the music, it is exactly what Camille experienced.

The book is a beautifully illustrated story of the love of one man for another, ripe with all the barriers to such love in a strict unforgiving society. The artwork alone conveys the intensity and beauty of the men’s feelings as the clear, simple language conveys their thoughts.

Camille leaves before the end of the concert because the music is so fine he wants to preserve it. After the concert ends Camille follows Teleny as he’s taken to a whorehouse by friends, a typical evening entertainment in Victorian London.  He imagines what Teleny goes through, including sex with a woman that doesn’t go well.

Camille feels he must forget about Teleny but finds him when he and his mother visit to a conservatory that looks a lot like Kew Gardens. His resolutions melt away and he can’t stop loving him.  When he cannot resolve his love he stands at a pool contemplating suicide.  From behind he’s grabbed just as he’s about to leap and finds it’s Teleny holding him. ”I love you. Are you mad?”  When Camille says the world is hateful to him Teleny says he will die with him so they can still be together.  They resolve it by making passionate love… “My skin was parched with a glowing heat an unbearable voluptuousness of mingled pain and pleasure [that] shattered my body and blasted my very soul.”

Just as things seem to be going well Camille receives a hand written note: “If you do not give up your lover T you will be branded as a Sodomite.”  Camille, a man of spotless reputation, could have his fair name blasted into obscurity by a single word.  He thinks the note came from the countess who lusted after Teleny and imagines them together. He later realizes it was written by Bryancourt, a jealous dandy who keeps a harem of boys in a voluptuous set of rooms. (Victorian queens are just as nasty your last boyfriend.)  The story shows us this private Victorian pleasure palace in lurid, tumescent detail.

After talking about separating and the hurtful prospects of one finding another man, they fall into another fit of passion.  “So keen it was, the bliss that came over me, that such intensity of delight could not last very long, soon, after a few almost unwilling contractions, the burning fluid was spouting out…slowly…and at long intervals.  I was hardly drained of the last drop before I was likewise bathed.  Our sightless eyes saw each other no more for we fell into that divine prostration which follows shattering ecstasy. At that moment if seemed as if we were floating somewhere between heaven and earth, not thinking that everything that has a beginning has an end.”

‘Testo Junkie: Sex, Drugs, and Biopolitics in the Pharmacopornographic Era’ by Beatriz Preciado
Rebecca Coffey: On Sigmund Freud's Relationship with His Lesbian Daughter Anna and Using Fiction to ...
'Say Bye to Reason and Hi to Everything' Edited by Andrew Durbin