‘A Poet of the Invisible World’ by Michael Golding

‘A Poet of the Invisible World’ by Michael Golding 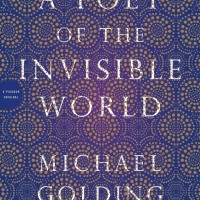 In the first sentence of Michael Golding’s captivating novel set in thirteenth century Persia, A Poet of the Invisible World (Picador), a boy is born with four ears “placed side by side, like pairs of matched seashells.” The anomaly is not a complete surprise for Maleeh al-Morad, the child’s mother. The day before her husband died (a dramatic accident involving an oxcart that plunges off the edge of a cliff), he awoke from a dream and told his pregnant wife that the baby she was carrying would have to be kept inside the house. News of the four-eared boy spreads through the village, where reactions range from bewilderment to violence. When the boy, now named Nouri, and his mother are threatened, she decides to wrap her son’s head in cloth to cover his ears and leave.

Maleeh al-Morad devises a plan to bring the baby to the city of Tan-Arzahn, where her cousin Habbib lives. In order to relocate she must sleep with an “oily milkman” (She demands that he bathe first, but he still smells “quite strongly of goat.”) In turn, he will transport her and Nouri in his rickety milk wagon to the city. On their journey, the milkman loses control of his wagon while crossing a bridge. The wagon falls into the river, Maleeh al-Morad and the milkman are killed, and Nouri is caught – miraculously, magically–by Habbib, who is walking beneath the bridge that very moment. From then on Nouri is known as the boy who fell from the sky.

All of this happens within the first fifteen pages of A Poet of the Invisible World. Years pass within sentences; lives are suddenly ended in a paragraph. Nouri falls in love with young men who in their own way love him. One relationship with an athletic youth named Vishpar, feels almost mythic. Golding calls it the union of “the poet and the warrior” and “the rose and the flame.” In this meeting of two opposite archetypes, the novel is reminiscent of Hesse’s Narcissus and Goldman. For much of his life, Nouri, the poet and the rose, travels from place to place, community to community, giving Golding’s novel a picaresque quality. We are witness to a life on the move.

What’s exceptional about A Poet of the Invisible World, however, is not its nomadic sweep; it’s that this sweep exists in a novel that is not afraid to stay still. Golding isn’t solely interested geographical distance. Indeed, the core of the book is about the spiritual distance Nouri travels in a lifetime. Nouri and Vishpar meet daily at a fountain to “share their deepest questions of each other” like “What are the first signs of spiritual intoxication? To what degree does the Shadow of the Absolute reflect His true being? Why must one pass beyond knowledge, if knowledge leads to truth?” And when Nouri becomes a Sufi mentor to a young man named Ryka, his student asks him, “What is the difference between peacefulness and tranquility? How does one move from intoxication to sobriety? How does one submit to annihilation?”

Golding presents us with some heady themes in A Poet of the Invisible World. We’re asked to consider how we seek life’s truths, the curative and expressive roles of art, and how experience–often painful–can bring us to a deeper understanding of life. In the wrong hands, these themes could make for a ponderous novel. It is a testament to Golding’s skills as a writer that there’s a curious buoyancy here, a charm, a feeling that this isn’t so much an intellectual exercise as it is one of pure storytelling. At times, A Poet of the Invisible World reads like a story handed down in the oral tradition, in the same way some of Gabriel García-Márquez’s stories do. And despite its many Dickensian twists and turns, Nouri’s search for spiritual fulfillment is not complex. “The truth is simple,” Nouri tells Ryka one day as they climb a mountain. “It is we who are complicated.” It’s what Golding seems to be telling us as well in this beautiful novel.

Editing Ben Gazzara
'The Rest of It: Hustlers, Cocaine, Depression, and Then Some, 1976-1988' by Martin Duberman
‘Camp Sites: Sex, Politics, and Academic Style in Postwar America’ by Michael Trask