Sacchi Green is the erotica-writing pseudonym for Connie Wilkins, and she’s got a list of publishing credits that’s about a mile long. She identifies as a life-long bisexual with strong lesbian leanings, and is definitely a muse for many a lesbian writer. Most recently, she won the 2010 Lambda Award in the Lesbian Erotica category for co-editing Lesbian Cowboys with Rakelle Valencia. She also edited Girl Crazy, and the forthcoming Lesbian Lust (due out in August), and is currently taking submissions for Lesbian Cops. 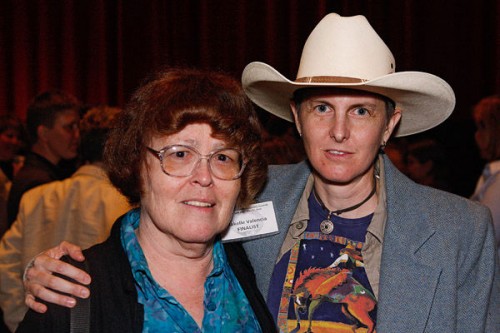 You’re a big proponent of erotica with high standards of plot and craftmanship.  What are some common mistakes you see in the submissions pile?

You write erotica as Sacchi Green and speculative fiction as Connie Wilkins. What’s the story behind your two names?

When I started writing for publication, rather later in life than most, I focused on science fiction and fantasy. I managed to sell enough short stories to qualify as an active member of SFWA (Science Fiction and Fantasy Writers of America), and planned to keep on that way, especially after I sold a couple of pieces to Bruce Coville’s series of anthologies for kids. Those paid better than anything else I’d written, and I hoped to do more along those lines. When I sold my first erotica story I figured that was a one-time thing, and if I were going to be writing extensively for children, it might be wise to use a pseudonym for my erotic work. Things didn’t work out that way; I was seduced by the erotic side of the force, and never wrote for children again (although I haven’t given up on the idea,) and by the time I noticed that my alter-ego Sacchi Green had racked up a lot more credits than Connie Wilkins, it felt too late too undo the damage. I do sometimes use my given name for speculative fiction, even when it’s erotica, but it’s all become somewhat muddled. My advice to anyone considering using a pseudonym is to consider how you’ll feel if your alter-ego becomes more successful than “you” do.

Lesbian Cops is open for submissions until the first of August. The title is pretty self explanatory, but are there any kinds of stories you’re particularly hoping to see for that one? Any tropes you’re sick of?

I always hope to see stories that are so original that I didn’t know I wanted them until I saw them. And I try to have a wide variety of themes, styles, settings, etc. As to tropes, in theory I believe that any idea, however overworked, can be done creatively by the right writer, but at this point I really don’t want to see any more traffic cops stopping drivers and demanding sex. A major problem with this kind of book (and with most erotica, though even more so here) is in meeting the varying hopes and expectations of the readers. I know people, personal friends, who have deeply-felt cop fetishes that involve officers doing things that would make others see them as villains. For that matter, I know people who have villain-fetishes. I also know women who are cops, real people with complex lives, and I don’t want stories that make them into caricatures. No single reader is going to like every story in a book, and many readers will find at least one story offensive; I need to find a balance. The best advice I can give is to pick a setting and characters that interest you, and take it from there.

Time Well Bent is an anthology of queer alternative history stories you edited, and you contributed a story as well. What is it about history that draws you? Do you have any favorite time periods?

I’ve always loved to read stories set in different eras. History itself, as we perceive it, is a form of story. I could pontificate about needing to understand our history in order to understand the present that grows out of it, but really, I enjoy reading and researching and writing about historical periods in the same way that I like to know about other cultures and parts of the world. Why limit yourself to one point in time, any more than to one point on the surface of the earth? As to favorite time periods, as a kid I was interested in the Medieval period because so much fantasy literature was set there, and as a young teen I was wrapped up in Jane Austen and Regency romances, but the older I get, the more history there is, and recently I’ve been working with the WWII period and on to the Vietnam War, which was my “present” not all that long ago, it seems.

You’re arranging readings for the fall. What new projects are on the horizon, and where can people find your tour schedule?

I’ll be posting readings and events on Facebook and Live Journal. Definitely one during Women’s Week in Provincetown (October 8-17), featuring several Cleis Press books including Best Lesbian Erotica and Best Lesbian Romance and my Lesbian Lust (because we can’t get enough readers together for any single book,) probably one in Philadelphia in mid- to late September, and possibly one in NYC in November. Boston is possible, too, if enough readers are available. I don’t “tour” much out of the Northeast, since I can’t afford the time or expense, but occasionally I’ll have a few writers close enough to each other to organize readings of my books in other parts of the country.

Sacchi Green blogs on LiveJournal, maintains a Facebook profile, and is active on the Lesbian Fiction Forum. She lives in Amherst, Massachusetts, and will be reading in various East Coast cities this fall.  This interview originally appeared on The Outer Alliance.

Emanuel Xavier on the '80s and '90s Club Scene and the Reissue of His Cult Novel 'Christ Like'
Katherine V. Forrest: A Different Light
Remembering Ralph Vicinanza