‘Ties That Bind’ by Sarah Schulman

‘Ties That Bind’ by Sarah Schulman 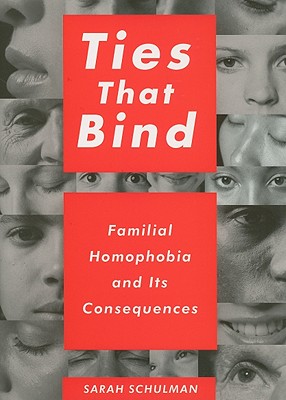 On the opening page of The Mere Future, the narrator declares, “People can get court orders to keep communication from happening, why can’t we get court orders to sit down and talk it through? That would be my idea of a better world.” In many ways, this is the notion at the heart of Ties That Bind. In crystalline, precise prose, Schulman outlines the patterns of familial homophobia (how revealing that this phenomenon—one of the foundational experiences of gay people’s lives—should heretofore lack a name), suggests concrete strategies to overcome it, and expands the concept to show how patterns learned in the family are perpetuated throughout society—in therapeutic settings, within love relationships, and throughout the larger culture.

Take, for example, her explanation of shunning, one of homophobia’s enforcement mechanisms:

“Shunning is when people are cut out, excluded from participating in conversations, communities, social structures; are not allowed to have any say in how they are treated; and cannot speak or speak back. Shunning is a form of mental cruelty that is designed to pretend that the victim does not exist and has never existed. It is practiced by religious groups like the Amish and Jehovah’s Witnesses, but it is also practiced by the arts and entertainment industries, the legal system, family structures, economic systems, and social conventions that pathologize and isolate gay people by not acknowledging or representing our experiences.”

Having described the way homophobia works in the family, and why scapegoating gay people is so appealing (“Oppressed people …cannot have their rightful place until the people who exclude them experience a diminishment of their own access and power”), Schulman arrives at the remedies. Most surprising to all but regular readers will be her rejection of the “alternative family” approach, whereby therapists or other allies recommend that the gay person should break away from the birth family that is treating her badly and create a new support system. As Schulman points out, this “allows the homophobes to own the family.” It robs the gay person of the power to hold their oppressors accountable and it prevents the possibility of reconciliation and appreciation.

Instead, she counsels intervention—observing familial homophobia and doing nothing is akin to passively watching physical abuse—and reconciliation through negotiation and due process. This may sound legalistic, but being heard is one of our most basic rights, and one that gay and lesbian people have repeatedly been deprived of.

Ties That Bind is a statement of principles gleaned from personal experience, presented in all their complexity. It is nuanced and quite specific. Toward the end of the book, Schulman asks that her ideas not be misrepresented by oversimplification, and since there is a possibility of doing so in a review of this length, it is worth repeating some of her disclaimers: “I am not saying that all families are terrible to their gay members. … I am not saying that all gay people replicate and extend the arm of familial, social, and cultural oppression to each other.” What she is saying is that familial, societal, and cultural homophobia is unjustified and that its victims deserve redress. She is stating it clearly and with substantiation. It’s a message that needs to be heard in all its complexity. People should read this book.

June Thomas is the foreign editor at Slate.

‘Pleading in the Blood: The Art and Performances of Ron Athey’ Edited by Dominic Johnson
‘Mad World: Evelyn Waugh and the Secrets of Brideshead’ by Paula Byrne
'New Queer Cinema: The Director's Cut' by B. Ruby Rich

June Thomas is the foreign editor at Slate magazine. She has worked at feminist bookstores, publishers, and magazines.