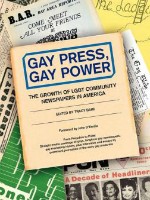 Before the Internet, a savvy young queer person could learn about LGBT culture by acquiring a gay or lesbian newspaper. They were usually available in queer-friendly bookstores and other “community” establishments. For someone still living with homophobic parents, it took an act of courage to bring one of those papers home, for fear they would be discovered—but what a lifeline these papers provided for those kids stuck in suburbia or rural towns. They provided affirming images and stories about LGBT people, and connected us to LGBT-specific news that was not always covered in mainstream papers. 21st century youth, however, depend more on Facebook and Twitter for information about the LGBT scene. Is there still a place for LGBT community newspapers in the world of social media? Tracy Baim’s edited volume Gay Press, Gay Power: The Growth of LGBT Community Papers in America provides a history of the LGBT press, but no easy answers as to its future.

The greatest strength of Gay Press, Gay Power is that it is edited and mostly written by heavy hitters of LGBT journalism, who worked for LGBT presses in the pre-Internet age. (For the complete list of contributors and their accomplishments, please consult the “Biographies of Writers and Editors” section in the Appendix of this book.) Chief editor Tracy Baim is an award-winning journalist, publisher, and executive editor at Windy City Media Group. Jorjet Harper has written for the gay and lesbian press since 1979. Chuck Colbert is a freelance journalist who writes for multiple LGBT and mainstream publications; his beat is the LGBT community and the Catholic Church. Owen Keehnen and Sarah Toce, who provided the majority of journalist biographies for Gay Press, Gay Power, have spent decades interviewing prominent people within the LGBT community; their work has been published by LGBT and mainstream media, earning many accolades.

The majority of contributors can use their professional experience to speak to twentieth century LGBT news media and contemporary journalists. For the most part, they have also done their research. Chapters covering historical content provide the actual examples of news and magazine articles and magazine covers to illustrate the portrayal of LGBT people and issues in mainstream and LGBT media. Jonathan Ned Katz, the GLBT Historical Society of San Francisco, the Homosexual Information Center, and the Chicago History Museum are just a few of the resources consulted to produce this book.

Gay Press, Gay Power is divided into five main sections. Part One is devoted to the early history of LGBT newspapers and LGBT media, Part Two is a collection of short biographies of prominent LGBT journalists, Part Three focuses on the major gay and lesbian newspapers that have survived up to 2012, Part Four deals with how LGBT media and other organizations advertise LGBT news, and Part Five addresses the value of LGBT media and its future. Part Five is the most compelling section of Gay Press, Gay Power. Journalists speak of the value that LGBT newspapers of the past have for historians and other researchers. St. Sukie de la Croix, who has brought queer Chicago to life by documenting it in gay newspapers, provides a valuable, witty chapter in this book “Researching Mainstream vs. Gay Media”. In her chapter “The Future of Queer Newspapers”, editor Tracy Baim cites how many high school students, teachers, professors, and others contact Windy City Media Group for old news articles. Contributors to this section voice a wide variety of opinions about the future of LGBT media. The strongest critique of LGBT media comes from blogger Yasmin Nair. In her chapter “Do We Still Need Gay News Media?”, Nair identifies the problems with LGBT media, and challenges us to rebuild it from the ground up.

As of 2012, Baim tallies up 103 regional and 22 national LGBT newpapers and magazines. While the number of LGBT print publications in the United States is shrinking, it does not mean that people have lost interest in LGBT media. Without LGBT newspapers, Gay Press, Gay Power argues, the queer community would have had no way of building a national consciousness of LGBT civil rights, the AIDS crisis, or LGBT culture prior to the Internet age. While the mainstream press is improving in its coverage of LGBT-related news, they still will not cover all stories—especially on the local level. At the same time, those people who want LGBT news may not want to pay for it if they are accustomed to getting free online information, and not all advertisers are willing to pay for ad space in a publication with what they perceive as a small audience. This leads to financial sustainability issues for those publishers and media groups that want to produce consistent, quality LGBT journalism. Gay Press, Gay Power challenges us to think of solutions to these modern challenges, as well as glorify the Golden Age of LGBT publishing.

We Need Your Help

In order to continue providing the  most comprehensive LGBT literary site on the planet, we at the Lambda Literary Foundation depend on contributions from donors such as you. Your donations alone make it possible for us to offer the very best coverage of LGBT literature, and we are asking for your support in this effort by making a Tax-Deductible Donation today.

'Eros and Dust' by Trebor Healey
Laurie Weeks: Making Magic Out of the Real
'In The Wake: On Blackness and Being' by Christina Sharpe