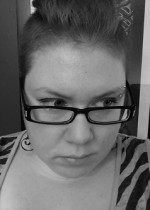 M-E Girard is a writer of YA fiction about teen girls who kick ass in a variety of ways. Some facts about M-E: She’s Canadian, speaks French, was a fellow of the YA workshop of the 2013 Lambda retreat, spends hours playing video games, has 2 chihuahuas, should stop eating so many carbs and cheese, buys too many books, and still plays with dolls. Her debut novel GIRL will be released in the fall of 2016 by Katherine Tegen Books, HarperCollins.