‘The New Negro: The Life of Alain Locke’ by Jeffrey C. Stewart

‘The New Negro: The Life of Alain Locke’ by Jeffrey C. Stewart 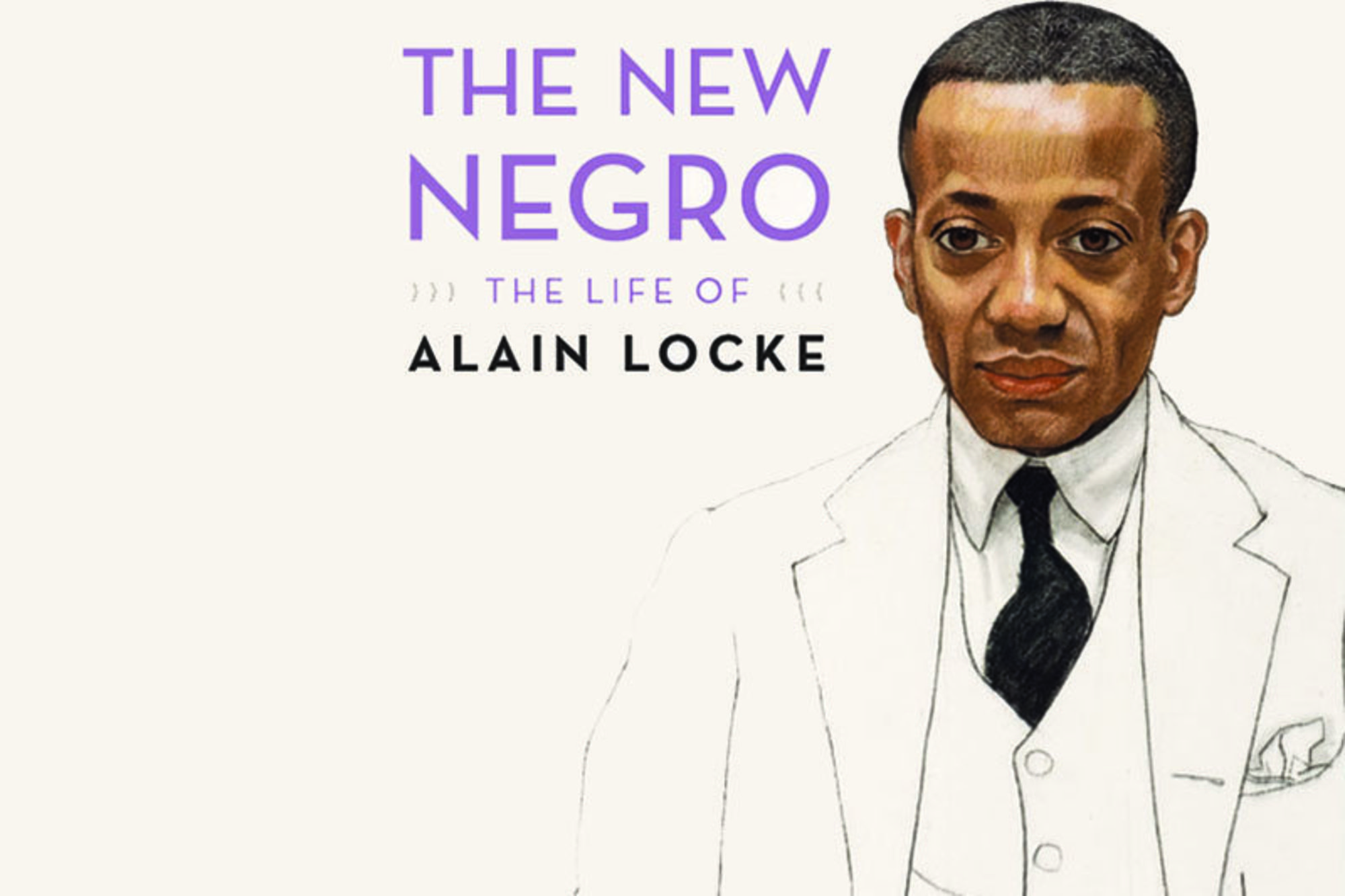 Jeffrey C. Stewart’s fine biography is a remarkable achievement in African-American studies as well as queer scholarship. It is also one of a scarce number of major biographies being written about distinguished American men of color. If not a tad too lengthy at 932 pages, the book opens with a bang-up first chapter, one that manages to introduce the sometimes-strange yet always obsessive, brilliant and fascinating psychological make-up of this gay Black intellectual and educator. Alain Locke was the chief philosophical architect and steward of the Harlem Renaissance, that vitally creative period in the American twenties, which sparked The New Negro movement or the beginnings of an African-American consciousness in the arts. This first chapter gives us a description of the wake that was held for Locke’s beloved mother, Mary Hawkins:

Locke [had] propped up on the parlor couch [the deceased Mary], as though she might lean and pour tea at any moment. She was dressed exquisitely in her fine gray dress, her hair perfectly arranged. She even had gloves on. Locke invited his guests to “take tea with Mother for the last time.”

Stewart comments about this “wildly eccentric” scene of bonding even in death between son and mother:

Such closeness between sons and mothers was not unheard early twentieth-century Black community, almost as compensation for the disruption of maternal relationships under slavery. . .The post-emancipation community tended to idealize mother-love, especially among the northern bourgeoisie, where two-parent family relationships symbolized class respectability and the nurturing, caretaking mother anchored Victorian families.

We go on to learn that Locke was a homosexual, a delicate boy, who rose from his Black Victorian Philadelphia upbringing to graduate in 1907 from Harvard University with degrees in English and Philosophy. He was even made a member of the Phi Beta Kappa Society. Immediately upon graduation, Locke became the first Black American to win a Rhodes Scholarship to Oxford University. There he encountered discrimination, but also began to associate with Black colonial students in the Oxford Cosmopolitan Club. As Stewart tells us in England:

[. . . ] Locke was beginning to understand how imperialism produced an even more insidious form of racial practice than the brutality of the Americans. He was beginning the second phase of his race education and learning imperialism was as much the practice of race as segregation. Due to extenuating circumstances, not least of which involved money debts but also warring factions at Oxford in the world of academic politics.

Locke never received his final degree from the school; a fact he covered up and lied about for the rest of his life. However, these years abroad also included a very fruitful 1910 philosophic term of study at Germany’s University of Berlin; studies that proved life changing.

Exposed to the high cultural achievements of Europe, Locke first embraced European cosmopolitanism, a concept he later abandoned, and became instead a Black aesthete, sold on the progressive views of Modernism. Locke was preoccupied with the newer sciences of sociology and anthropology just coming into vogue, and merging these with his rigorous philosophic training, he synthesized a new perspective on African-American cultural identity. This new Negro identity was to be born out of a plurality of Black art, music and literature. He wanted to foment a Black Renaissance, a renaissance as had occurred in Italy in the 15th and 16th centuries, and in Ireland in the early twentieth. His Renaissance was to affirm the genius and achievement of African Art and to validate its creative beauty and tradition in the face of a dominant Eurocentric Western canon.

In Europe as well at Oxford and in Germany, Locke experienced the free sexual license of a thriving though somewhat closeted homosexual community. He took several fellow Oxford students as lovers and established a life-long sexual preference for young, highly intelligent and talented men, often of color. This pattern of visiting Europe to express his homosexual nature would continue for the rest of his adult life. In America he contained these desires, revealing them only to a few close associates and friends. However, he never denied his queerness and never indulged in a marriage of convenience as had Countee Cullen and many other Black homosexual artists and intellects of the Harlem Renaissance.

In 1912 Locke became an Associate Professor of English at Howard University, the prestigious all-black American university. In 1916 he returned to Harvard to pursue his PhD in Philosophy, which he received in 1918. Throughout these formative years his mother, Mary, was a constant presence in his life until her death in 1922. She played both his surrogate “wife,” emotional crutch, confidante, and most loyal supporter. Without her, Locke suffered extreme mental distress.. In later life he mastered this erratic energy of separation anxiety and redirected it into his work.

Locke’s operative word was “discretion” as far as his homosexuality in America.  He projected in his early years the refinement and veneer of a Black Victorian and hung on his mother’s apron strings in a deeply codependent manner. Throughout his adult life at home he sublimated his sexual desires and frustrations into rigorous scholarship. He was a mercurially demanding and difficult lover by all accounts. He required total support and obedience of his young male partners, support often far beyond their mature capabilities.

He developed an extreme passion for Langston Hughes, the brilliant and sexually conflicted Black poet. Both appeared to use the other in a strange, complex relationship of seduction and avoidance that went on for many years. Locke had sexual liaisons with many gay artists and intellects and helped to influence and shape their careers, but he failed to find a life-long lover and companion. There was one brief exception however, when he took up with the exceedingly young and bright, Maurice V. Russell.

Stewart masterfully reclaims and analyzes the psychosexual history of Locke. He deftly suggests and teases out how Locke’s queerness shaped his decisions and his motivations, as well as his worldview. Stewart points out how a queer aesthetic pervades much of the Harlem Renaissance’s culture. The biographer also investigates Locke’s misogyny toward Jessie Fauset and Zora Neal Hurston, and exposes how Black women artists and their legacy were overlooked and discounted.

The bio also explains the background and dueling philosophies of two great minds of Black American culture in the 1920s; namely W. E. Du Bois and Charles S. Johnson. W. E. Du Bois was the editor of The Crisis magazine and Johnson was the force behind Opportunity. Locke threw his allegiance with Johnson and held to the belief that Black art should aspire to rise above the level of propaganda. Locke began to slowly develop his philosophy on the New Negro during these years. His philosophy was based on the awareness and belief in Black equality. No longer psychologically would Blacks accommodate themselves to an inferior status with regards to White primacy, but rather with greater self-confidence and political awareness, they would grow to be Black-identified intellectuals, artists and writers. Locke differed in regards to his beliefs with W. E. B. Du Bois. Du Bois felt Black artists should aspire to uplift their race, while Locke encouraged them to be true only to themselves and their artistry. Rather than a didactic and political conflict-driven view of Black art, one always in deference to Whites, Locke felt African art history would influence and merge with the American Black artist’s individual self-expression. The Black artist by acknowledging his humanity would bring about a change in his or her perception by Whites.

Locke wrote about the supremacy of African art and culture, its integral role in influencing Modernism as well as its beauty, value, and equality. He secretly abhorred the slovenly depiction of working class, under-educated Blacks with their “uncultured” ways. Ironically enough in the 1930s Locke would transform himself into a lecturer at Black Marxist and proletarian assemblies, joining forces with the young Black artists such as Richard Wright and their embrace of the Black lower-classes, as well as Hurston’s validation of Black, folk literature.

Stewart gives us, as well, a window into the world of White patronage toward the Black artist. Charlotte Mason financially supported, at one point, Locke, Hughes and Hurston. Mason was the rich widow of a wealthy psychiatrist. Locke courted her for years in hopes of founding in Harlem his Museum of African Art. Locke envisioned his museum as instructing, inspiring and influencing a whole generation of Black American artists in their ancestral heritage.

He also found support from the backstabbing, overbearing, White millionaire industrialist and art-collector, Albert Barnes. Locke’s career was famously indebted to the White editor, Paul Kellogg, who asked Locke to edit a 1925 issue of his White periodical Survey Graphic. The issue was to be dedicated to Black life and its unofficial capitol, Harlem. Titled “Harlem: Mecca of the New Negro,” the special issue sought to educate its readers on the emerging vibrant Black culture of New York City. This edition, including Locke’s essay on “Enter the New Negro” and illustrations by Winold Reiss, would go on to make Locke a national figure and provide the foundation for his seminal anthology of Renaissance writing: The New Negro: An Interpretation. The New Negro was published in December of 1925.

Locke taught at Howard University off and on until 1953, but not before a messy and contentious “divorce” from the school in 1925. The teacher and scholar had been unfairly fired that year and sought legal restitution to be reinstated, which he achieved in 1928.

Stewart’s book is meticulously researched and in terms of queer scholarship reclaims Locke and other prominent homosexual artists of the Harlem Renaissance from the sketchy and sometimes evasive histories of that past. By showing Locke as the Other, both as being homosexual and Black, Stewart gives us a far more complex reading of this complicated man.

Stewart also exhibits a mastery at psychoanalyzing Locke. He paints a very intimate portrait, a portrait, which is uniquely sensitive to Locke, the gay Black youth, too afraid, shy, and sickly to dangle his feet in a muddy swimming hole, as he stares admiringly at the White boys skinny-dipping and horse-playing all about. It is in these descriptive moments, that Stewart truly brings Locke to life.