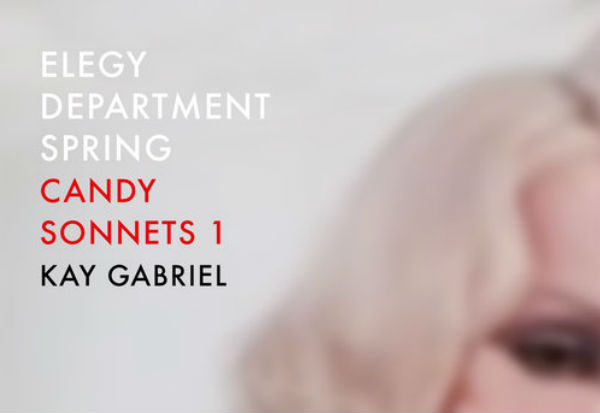 The Velvet Underground’s 1969 “Candy Says” ends with the question: “What do you think I’d see / if I could walk away from me?” Lou Reed wrote the song about Candy Darling, the actress and artist who became a Warhol Superstar. In the song, Doug Yule sings as Candy Darling, positioning us as the speculating “you” invited to watch Candy step outside herself in order to see herself. Through rhyme, the lyric locks “you” and “me” together in different forms of impossible witnessing.

Kay Gabriel’s Elegy Department Spring coheres through a similar, if more complex, invocation: to figure ways of seeing the proliferating self through a poetics of displacement and affinity. Selected as a finalist by Richard Siken for the 2016 BOAAT Chapbook Prize, Gabriel’s latest chapbook is a thunderous, heady sonnet cycle about beloved icon Candy Darling.

The sonnet is an ideal form for deconstructing gender’s forms, and what I like here perhaps most of all is the exploration of meter when it comes to how the self talks to the self. The language we invent to talk to ourselves is, of course, a mash-up of syllabics taken from every little corner of our lives and is littered with cultural debris (not unlike the ways visual and linguistic languages were incubated in the Factory):

the problem of writing “pleasure”
when you meant “gender”
replaced under the sign of DALLES
ANDRO CANDY DARLING JACKIE
CURTIS.

Masculine self-consciousness stales in ubiquity, but women revealing and rehearsing the self becomes near blissful, immaculate conception: “we fucked too long and here I am unseemly at the beach.”

Theorizing citation and self-referentiality, Gabriel vis-à-vis Darling shows us that gendered sophistication is as much about falling apart as it is about pulling it together.

Women quietly at war with themselves or
the imitation of Kim Novak you undertake
for work, well why aren’t there two or twelve
of me to shop with?

Each poem’s a delicious paradox, a queer assertion of dignity that refuses the moral trappings of dignity.

In Gabriel’s poetics, femininity functions too as stylistic structure: a layering of artifice, sonnet cycle coiling like a snake, poem as photo shoot. The cross-histories in this little volume make me think of the glamour of the silent secretary-cum-administrator, woman’s pithy proximity to dehumanization, the sheer publicity around women’s heartache. As Gabriel writes, “here it’s the 70’s and degradation means something.” The experiment seems to be about mobilizing, organizing, deploying femininity via a complex sequence of citation, a side project of which requires building a cutthroat armada of poetic one-liners. A thousand metonyms set sail. In what feels to me the centerpiece of the collection “Girl Like Adverb,” Gabriel begins, “Candy I trust your cruelty like a gossip column.”

The chapbook figures what it means to be young, gorgeous, and bottle blonde, mock-embracing feminine stereotypes and filtering them through the smallest of American small-minded dreams (a line lifted from Candy’s diary: “anyone can be beautiful: / at least anyone can have beautiful / hair”) and the most immediate of counter-cultural crises, as in the heartbreak/shotgun line, “Holly we miss you, get up.”

At times the poet is underground cinematographer messing with time and metric; the next moment, the most wistful of Greeks (Gabriel studies classics at Princeton). In “Pastoral”: “I wanted something buoyant to say / stretch a hand and the hand says yes and here / in the key of friendship choking on the bone of love.”

Elsewhere the pop gay pastoral presents as grazing of genres:

If I wrote another mode, history not the fantasy
of intimacy in gossip rags or the languid tones of beaches
I’d probably have put it otherwise
the waves break on the monologue shore, where else

Reed’s question in “Candy Says” wants to be an invitation for others to observe the self a la Darling: to experience the self both inside and outside and to use language (and art) in a citation loop that always points back to the displaced self and its construction. Some of us latch onto stars as a way toward and against selfhood, toward and against history. Elegy Department Spring epitomizes such a practice of self-awareness centered in undoing selfhood through other selves.

Alternatively, Gabriel’s chapbook imagines what happens when Candy Darling never dies, but grows instead, in hiding, over several decades, into the 50 Foot Woman she might have adored as a teen. Why attack when you can howl back as a five-story icon of beauty and resistance? As Gabriel declares, “In the age of Revlon you / win or you smudge.”