The prize honors LGBTQ-identified authors who have published multiple novels, built a strong reputation and following, and show promise to continue publishing high quality work for years to come. Made possible through the generous support of the late Dr. James Duggins, the award includes a cash prize of $5000.

The judges for the Duggins Prize were award-winning poets Julie Enszer and Reginald Harris. In a joint statement they said of this year’s winners:

When we first peeked at the applicants for this award, we both shared a deep appreciation and admiration for Shani Mootoo’s novels. They are fresh, exciting, and tell stories from the perspective of diasporic Caribbean LGBTQ life, an under-examined perspective in contemporary literature. From her first novel to the most recent, Mootoo’s work as a novelist continues to present diverse, complex characters rooted in LGBTQ communities in powerful and provocative ways. While her current body of work–including the novels ‘Cereus Blooms at Night’, ‘He Drown She in the Sea’, ‘Valmiki’s Daughter’, ‘Moving Forward Sideways Like a Crab’; her short fiction ‘Out on Main Street: And Other Stories’; and her poetry collection ‘The Predicament of Or’–seems like enough for a full career, we are hopeful that we and all readers will be greeted with many more works by Shani Mootoo.

James Earl Hardy established a category-the gay hip-hop love story–and all of our lives are better for it. We both have fond memories of encountering Hardy’s novels and their unique point of view. Hardy is a vital chronicler of black LGBTQ/MSM life, writing with humor and a vibrant erotic edge. ‘B-Boy Blues’ was the first in a series of books that chronicles the lives of African American gay men with charm, honesty, and audacity. Hardy’s work in the B-Boy series–‘B-Boy Blues’,’ 2nd Time Around’, ‘If Only For One Nite’, ‘The Day Eazy-E Died, ‘Love the One You’re With’, and ‘A House is Not a Home’–helped a generation of queer people traditionally underrepresented in literature to see themselves on the page. Now his characters appear not only in novels, but also on the stage. Like Mootoo, Hardy has had a full career, but we anticipate his continued productivity as a writer and look forward to the new directions his imagination and creativity will take his readers.

Hardy and Mootoo will be recognized as winners of the Duggins Prize at the 29th Annual Lambda Literary Awards ceremony on June 12th in New York City.

“The Outstanding Mid-Career Novelist prize had been on hold for two years since, sadly, Dr. Duggins passed away in 2015,” said Tony Valenzuela, Lambda’s Executive Director. “Jim was deeply proud of our LGBTQ literary community and would have been thrilled to see us honor, through his passion and generosity, these two extraordinary novelists, James Earl Hardy and Shani Mootoo. We congratulate them!” 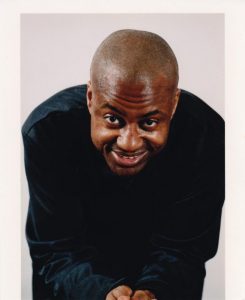 JAMES EARL HARDY is the author of the bestselling Lammy-nominated novel B-Boy Blues, praised as “the first gay hip-hop love story.” There are six sequels: 2nd Time Around, If Only For One Nite, The Day Eazy-E Died, Love The One You’re With, A House Is Not a Home, and “Is It Still Jood To Ya?” (featured in Visible Lives: Three Stories in Tribute to E. Lynn Harris). His stage adaptation of B-Boy won the Downtown Urban Theater Festival’s Audience Award. 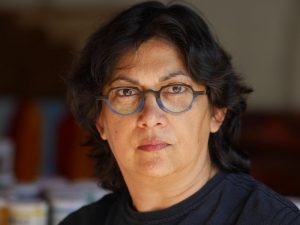 Shani Mootoo was born in Ireland, grew up in Trinidad, and has lived in Canada for the last thirty-five years. She is a short story writer, novelist, poet, and a visual artist. Mootoo’s novels include Moving Forward Sideways Like a Crab, recently released by Akashic Books in the US and longlisted for the Scotia Bank Giller Prize and shortlisted for the Lambda Award; Valmiki’s Daughter, longlisted for the Scotia Bank Giller Prize; He Drown She in the Sea; and Cereus Blooms at Night, shortlisted for the Giller Prize, The Chapters First Novel Award, The Ethel Wilson Book Prize, and long-listed for the Man Booker Prize. She is a K.M. Hunter Arts Award and 2017 Chalmers Fellowship Award recipient. She currently lives in Prince Edward County in Ontario.