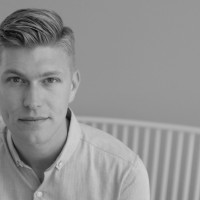 AT THE PALAIS GARNIER

We always arrived late,
___sometimes in masks. You wore a sword
at your side. The heads that watched
___our little pageant were busts of the great composers
and not men lined up for the executions.
___The style was Second Empire,
but the Empire had already fallen
___by the time the façade was finished.
The casts changed seasonally
___like our lovers. I remember,
through black lace fans, Hänsel & Gretl
___eating a garish cake in the darkness.
We covered our mouths
___when we laughed at the children trapped
in the house of sweets. We ate cake at intermission
___in order to stay awake.

Once nothing separated us but the gossamer
of sheets—white and gauzy in the summer, when a world
of heat blew in, inflating
the curtains into the room that was his
and mine, when no one else was there—
nothing between the body, whose hot-bloodedness,
whose frailty I had come to know
the duration of my life,
_________________________and the body
he drank cool water with, the body he salted, mile after mile
along the coast, fucked me with, with which
he told me what troubled him
_______________________________.—the two of us in our bed
of Egyptian cotton.
The sea reflected us, our human emotions.
Then the sea refused us, like the sea.

RICHIE HOFMANN is the author of Second Empire (Alice James Books, 2015), winner of the Beatrice Hawley Award. He is the recipient of a Ruth Lilly Poetry Fellowship, and his poems appear in The New Yorker, Ploughshares, Yale Review, Kenyon Review, and Poetry.