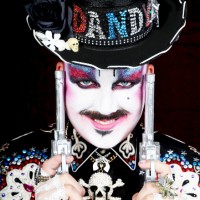 “The mask that we all wear in our day-to-day life is pretty fascinating,” explains New York storyteller and performance artist, Dandy Darkly. His mask of choice—delicately applied make-up—looks like a cross between the infamous drag queen Divine and a turn of the century vaudeville clown. His persona is as perverse as the powder on his face, yet this masks bears so much sincerely even when he performs his fabulous stories of sex and death onstage.

The inception of Darkly’s persona started seven years ago with the website DandyDarkly.com, where he wrote serialized tales inspired by his love of the supernatural and high-camp bitchery. “It was about an embittered, bitchy, gay, exorcist living in this fabulously fantastical version of Manhattan,” he explains. Two years later, a friend who had been following Darkly’s work asked whether he’d dress up in character and perform one of his stories for a cabaret he was producing at the Stonewall Inn. Having studied theatre at the University of Georgia in Athens, Darkly said yes.

Growing up in the south, Darkly’s grandfather instilled in him a love for ghost stories and storytelling. “There’s a really fantastic tradition of ghost stories in Georgia,” he says, proud of his roots. Even at the age of five, the young Darkly had made audio recordings of himself telling spooky tales.

Darkly’s ghost stories are of the most unique kind; they’re moral tales garnished with gore, guts, and cum—surely a departure from the ones told by Grandpa Darkly. Having come of age during the height of the HIV epidemic, gay sexuality were linked to disease and death in Darkly’s mind and so these real-life sentiments found their way into his work. “Sex and death are so very connected,” Darkly says.

Darkly’s tales are allegorical representations of controversial queer topics like HIV transmission, discrimination in queer culture, and gay male misogyny. He explores these themes with satire and violence but points out that there’s a delicate balance, careful not to offend fans when dealing with more sensitive topics. To be safe, he has consulted with friends in the past who have been directly affected by subjects as the HIV epidemic, which is the focus of his story, “Bitten.”

“You can tell when a person is being careful,” Darkly explains, “but also fearless in terms of sharing [their] point of view.” And it’s his unique point of view that makes his work so heartfelt even if it ruffles a few feathers along the way. Not everyone appreciates his satire or sees the deeper truth in his work, but that’s okay.

“With such an elaborate persona, you can get away with saying so many things,” he adds. “But I don’t think I could ‘get away’ with something if it wasn’t performed or said with heart or with positive intention.”

For his solo show at the Edinburgh Fringe Fest last year he was dressed in what “Dandy Darkly” would’ve considered butch cowboy gear, complete with white, rattlesnake skin cowboy boots that had tapered points and snake heads at their tips. He began with “Silver Dollar,” a story about werewolves, gun violence, and internalized homophobia in the south. His solo shows feature him on stage, vividly painting the world from his stories through rhythm and rhyme, shouting, acting, and losing his breath with his arms moving about.

While performing “Silver Dollar,” he felt that the music sounded off so when it was done he went to turn the volume down. His beloved cowboy boot caught the audio cable, cutting the sound out altogether. The music was produced specifically for the show with sound effects to accompany his routine but it was all gone. To make matters worse, there were four critics in the audience.

In many ways, the music was another layer to Darkly’s mask, which was suddenly stripped off. His only option was to perform the rest of the show a cappella style with words alone, having to find the rhythm from within. “It was terrifying,” he explains, “but it was also elating.” Despite the mishap, he got glowing reviews so one must wonder whether this mask of “Dandy Darkly” is simply a reflection of his true self and whether he’s still the same soul underneath that everybody loves. No doubt the make-up is but a stylized reflection of his southern upbringing, his childhood love of the supernatural, and of a young man growing up in the shadows of the AIDS crisis.

RADICALS explores stories and theories about getting off in public places (and other kinky play). The Eagle NYC will be converted into a modern day sexual / literary space where words and images breed, creating a truly immersive experience.

'James Baldwin: The Last Interview and Other Conversations' by James Baldwin
Spotlight on New Queer Literature: A Conversation with GlitterShip
Larry Closs: Bringing Back the Beats with 'Beatitude'