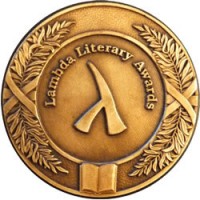 New York City-The winners of the 27th Annual Lambda Literary Awards (the “Lammys”) were announced on the night of June 1st in a gala ceremony hosted by comedienne Kate Clinton at The Great Hall at Cooper Union. It occurred on the heels of BookExpo America, the book publishing industry’s largest annual gathering of booksellers, publishers, authors, and readers. The Lambda ceremony brought together over 550 attendees, sponsors, and celebrities to celebrate excellence in LGBT literature and 27 years of the groundbreaking literary awards. Lauren Patten of the hit Broadway show Fun Home and performer Toshi Reagon graced the stage with special performances. The celebration continued in SOHO at the VIP After-Party hosted by Scholastic at the Scholastic Greenhouse & Terrace with celebrity DJ Sean McMahill spinning tunes.

The ceremony opened with an animated video by Melanie La Rosa and Johanna Campos. It cleverly symbolized the fundamental elements of the Lambda Literary Awards, as it depicted superheroes saving a town called “Gaytham” with literature. As master of ceremonies, Clinton once again stood up to the mic to bon mot her way through her fourth consecutive year as the self-described Julie McCoy, aka cruise director of the evening’s Loveboat of literary Lammy Awards. Those too young to catch the reference were encouraged “to Google it.”

Feminist legend Gloria Steinem introduced Rita Mae Brown, author of the classic, Rubyfruit Jungle, who received the Pioneer Award. Describing laughter as “an orgasm of the mind,” she praised Brown for always understanding joy and laughter. Brown described Steinem as “our North Star. If you can find her, you’ll never be lost.”

It wasn’t a love fest, but a joke fest when gossip columnist Liz Smith introduced filmmaker and author John Waters, who received Lambda’s Trustee Award for Excellence in Literature. Smith said, “Nowadays Andy Warhol,” speaking of the icon with whom Waters is often compared, “is a multi-billion-dollar industry, but John Waters is the real thing. John is truly sweet. Andy only appeared that way.” Waters’s entire speech was punctuated with a steady stream of one-liners. He dubbed the Lammy Awards as the Imperial margarine of queer royalty. And he dedicated the award to the original owners of the Provincetown Bookstore where he worked for a summer in his youth and where he received his true education.

In a sign of the transgender coming of age times in which we’re living, Casey Plett winner in the Transgender Fiction category for A Safe Girl to Love ended her rousing acceptance speech with, “The transgender community is taking over!” The Betty Berzon Emerging Writer Awards were presented to writers Anne Balay and Daisy Hernandez.

The special interlude performances each merited standing ovations. Musician Toshi Reagon accompanied herself on guitar as she sang “Freedom,” and “Kindness,” which she dedicated to the late author Octavia Butler. Lauren Patten, who plays the college-age version of Alison Bechdel on Broadway in the hit musical Fun Home (based on Bechdel’s graphic memoir and nominated for 12 Tony Awards) sang “Changing My Major” about the revelation of first love with another woman.

“Throughout tonight’s ceremony we were reminded of the impact that LGBT literature has on people’s lives,” said Tony Valenzuela, Lambda Literary Foundation Executive Director. “Congratulations to all the winners and honorees.”

As always, the stage sparkled with a glittering roster of presenters from the worlds of film, television, theatre, politics, religion and, of course, literature. Just some of the presenters who graced the stage were

PHOTOS OF THE 27TH ANNUAL LAMBDA

More photos will be uploaded throughout the week

Lambda Literary Board of Trustees