‘The Autumn Balloon’ by Kenny Porpora

‘The Autumn Balloon’ by Kenny Porpora 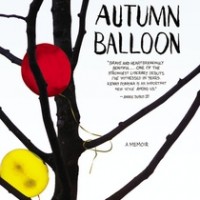 “Harrowing” is the word that first comes to mind when I try to think of adjectives to describe reading Kenny Porpora’s debut memoir, The Autumn Balloon (Grand Central Publishing). And yet, it’s a credit to the author’s command of words and gift for storytelling that such a bleak coming-of-age tale can also be compulsively readable and ultimately hopeful without ever being cheesy.

Porpora kicks things off with a prologue that is actually the ending: a dinner at the Times Square Olive Garden with his mother, brother, and mentor to celebrate the occasion of his graduation from Columbia University’s School of Journalism. While this type of beginning can often feel like a cop-out for writers who do not know how to start a story, in this case it provides grounding and perspective for the brutal events that will follow, and requires us to wonder how the author—and by extension we—could possibly get from here to there in one piece.

He sums up what follows the prologue succinctly: “Somewhere between the minimum-wage jobs, between sleep and sitcoms, switching schools and dying relatives, I became an adult.” And that’s a surprisingly gentle way of distilling down the horrors of addiction, abuse, poverty, and homophobia that he will go on to chronicle. For a memoir, this book reads more like a novel—a dark one in which you know that any momentary triumph or levity is only setting you up for a more devastating low soon to come.

There are, however, genuine moments of humor and joy sprinkled throughout the narrative like bright stars in a despair-black sky. These include the time when Porpora’s racist and homophobic grandmother meets his new black friend and instantly takes a liking to him while delivering the synopsis of The Birdcage through hysterical fits of laughter. And, later on, when our narrator fulfills his dream of meeting his idol, Roger Ebert, under the false pretenses of interviewing him for a documentary on the MPAA. The moral of these vignettes is that people can surprise you, and the fact that that message is conveyed without heavy-handed moralizing makes it all the more impactful.

The Autumn Balloon is alarmingly engrossing. I sat down with this book with the intention of reading a chapter or two and came up for air hours later, bewildered and with my cheeks wet, having devoured at least two-thirds of it. The unflinching look at an array of difficult subjects may make it a hard sell for some, but Porpora deploys a deft hand and straightforward tone that lifts what could have easily been a maudlin, self-pitying—or, in the opposite direction, self-congratulatory—narrative into a memoir that should be moved to the top of everyone’s to-read list immediately.

Matthew Gallaway: On His New Novel and Finding a Different Kind of Faith
'Spandex: Fast and Hard' by Martin Eden
“Yes, I Really Am This Vulnerable”: 'Unthinkable Creatures' has Heart