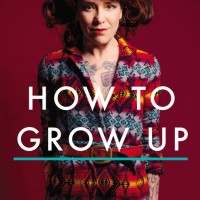 New month, new books! A new year is upon us, and so are a slew of new and noteworthy LGBT books.

In her new memoir How To Grow Up (Plume), author Michelle Tea’s details the trails, tribulations, and assorted pleasures she discovered on her road to adulthood.

As an aspiring young writer in San Francisco, Michelle Tea lived in a scuzzy communal house; she drank, smoked, snorted anything she got her hands on; she toiled for the minimum wage; and she dated men and women, and sometimes both at once. But between hangovers and dead-end jobs, she scrawled in notebooks and organized dive bar poetry readings, working to make her literary dreams real.

In How to Grow Up, Tea shares her awkward stumble towards the life of a Bonafide Grown-Up: healthy, responsible, self-aware, stable. She writes about passion, about her fraught relationship with money, about adoring Barney’s while shopping at thrift stores, about breakups and the fertile ground between relationships, about roommates and rent, and about being superstitious (“why not, it imbues this harsh world of ours with a bit of magic.”) At once heartwarming and darkly comic, How to Grow Up proves that the road less traveled may be a difficult one, but if you embrace life’s uncertainty and dust yourself off after every screw up, slowly but surely you just might make it to adulthood.

From the acclaimed filmmaker, artist, and bestselling author of No One Belongs Here More Than You, a spectacular debut novel that is so heartbreaking, so dirty, so tender, so funny—so Miranda July—that readers will be blown away.

Here is Cheryl, a tightly-wound, vulnerable woman who lives alone, with a perpetual lump in her throat. She is haunted by a baby boy she met when she was six, who sometimes recurs as other people’s babies. Cheryl is also obsessed with Phillip, a philandering board member at the women’s self-defense nonprofit where she works. She believes they’ve been making love for many lifetimes, though they have yet to consummate in this one.

When Cheryl’s bosses ask if their twenty-one-year-old daughter, Clee, can move into her house for a little while, Cheryl’s eccentrically ordered world explodes. And yet it is Clee—the selfish, cruel blond bombshell—who bullies Cheryl into reality and, unexpectedly, provides her the love of a lifetime. 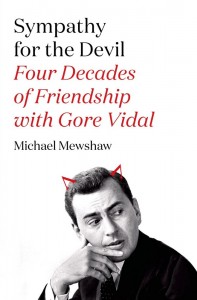 Farrar, Straus and Giroux is publishing Sympathy for the Devil: Four Decades of Friendship with Gore Vidal, writer Michael Mewsha’s detailed accounting of his friendship with author and cultural provocateur Gore Vidal.

Detached and ironic; a master of the pointed put-down, of the cutting quip; enigmatic, impossible to truly know: This is the calcified, public image of Gore Vidal—one the man himself was fond of reinforcing. “I’m exactly as I appear,” he once said of himself. “There is no warm, lovable person inside. Beneath my cold exterior, once you break the ice, you find cold water.”

Michael Mewshaw’s Sympathy for the Devil, a memoir of his friendship with the stubbornly iconoclastic public intellectual, is a welcome corrective to this tired received wisdom. A complex, nuanced portrait emerges in these pages—and while “Gore” can indeed be brusque, standoffish, even cruel, Mewshaw also catches him in more vulnerable moments. The Gore Vidal the reader comes to know here is generous and supportive to younger, less successful writers; he is also, especially toward the end of his life, disappointed, even lonely.

Sparkling, often hilarious, and filled with spicy anecdotes about expat life in Italy, Sympathy for the Devil is an irresistible inside account of a man who was himself—faults and all—impossible to resist. As enlightening as it is entertaining, it offers a unique look at a figure many only think they know.

Leo Bersani’s career spans more than fifty years and extends across a wide spectrum of fields—including French studies, modernism, realist fiction, psychoanalytic criticism, film studies, and queer theory. Throughout this new collection of essays that ranges, interestingly and brilliantly, from movies by Claire Denis and Jean-Luc Godard to fiction by Proust and Pierre Bergounioux, Bersani considers various kinds of connectedness.

Thoughts and Things posits what would appear to be an irreducible gap between our thoughts (the human subject) and things (the world). Bersani departs from his psychoanalytic convictions to speculate on the oneness of being—of our intrinsic connectedness to the other that is at once external and internal to us. He addresses the problem of formulating ways to consider the undivided mind, drawing on various sources, from Descartes to cosmology, Freud, and Genet and succeeds brilliantly in diagramming new forms as well as radical failures of connectedness. Ambitious, original, and eloquent, Thoughts and Things will be of interest to scholars in philosophy, film, literature, and beyond.

Bloomsbury is releasing Don’t Let Him Know, a novel of familial drama by writer Sandip Roy.

In a boxy apartment building in an American university town, Romola Mitra, a newly arrived young bride, anxiously awaits her first letter from home in India. When she accidentally opens the wrong letter, it changes her life. Decades later, her son Amit finds that letter and thinks he has discovered his mother’s secret. But secrets have their own secrets sometimes, and a way of following their keepers.

Amit does not know that Avinash, his dependable and devoted father, lurks on gay Internet groups at times, unable to set aside his lifelong attraction to men. Avinash has no idea that his dutiful wife had once romanced a dashing Bengali filmstar, whose memory she keeps tucked away in a diary amongst her silk saris.

Growing up in Calcutta, in a house bustling with feisty grandmothers, Amit has been shielded from his parents’ secrets. A successful computer engineer, he settles in San Francisco, torn between his new life and his duties towards the one he has left behind.

Moving from adolescent rooftop games to adult encounters in gay bars, from hair salons in Calcutta to McDonald’s drive-thrus in California, Don’t Let Him Know is an unforgettable story about family, the struggle between having what we want and doing what we feel we must–and the sacrifices we make for those we love. Tender, powerful, and beautifully told, Don’t Let Him Know marks the arrival of a brave new voice.