Have you checked out Glitterwolf Magazine yet? If not, you should. Glitterwolf Magazine is a new well-curated, well-designed, UK-based literary and arts magazine that “publishes poetry, fiction, art and photography by contributors identifying as lesbian, gay, bisexual or transgender.”

Glitterwolf editor Matt Cresswell took some time to talk with Lambda about starting the magazine, aesthetics, and what constitutes queer writing.

What was the impetus for starting Glitterwolf?

Pure nostalgia. I’d been out in the real world wage-slaving for a few years, and the sense of writer’s community I’d experienced while studying Creative Writing at university seemed a very long way away. So three months into a global recession, I thought, “A-ha! Small press literary magazine is a great business model!”

As for why an LGBT magazine: partly because that was my little corner of fiction; I’d read and written in that area, and I knew other people writing in that area, and there was a wealth of great but largely ignored stuff. No one really standing up and shouting about it—especially in the UK, where Chroma had just closed its doors.

What challenges did you face when starting the journal? How did you meet those challenges?

Starting up, the biggest challenge was simply having to feel blindly around to produce this grand idea. I’d worked as an editor and a graphic designer before, and I’ve read countless literary magazines, so I had deliriously expected that I had the full necessary skillset, but as with anything, there’s a lot of learning along the way.

After that, there was just simply being heard—especially before anything was published, and we were seeking the first round of submissions. I had this terror of having to compile an issue from two short stories, a couple of poems and a stick drawing.

Of course, once we had been heard, I found myself tangled up in complaints from lots of people online about the editorial policy of ‘LGBT contributors only’—lots of claims of discrimination, generally from, to be honest, straight white males. I can see the logic of their arguments, but at that point the whole enterprise felt in danger of wobbling and collapsing in the face of it. I had to remind myself that there was a reason I was championing LGBT writers and artists, and stick to my guns.

Did you have an audience or readership in mind when you decided to pull it all together?

No—all I had in my head was to make the magazine into a stage for talented creatives, I hadn’t considered who’d actually come through to doors to sit down and watch. I didn’t want it to be explicitly for a gay audience, I wanted to feature things that could appeal universally. Of course, we would still be a good home for fiction, poetry or art with gay characters or themes, but not every LGBT person is just queer, and so I didn’t want the magazine to be either.

In terms of aesthetics and craft, what kind of work were you looking to be included in Glitterwolf?

And when I read them I think, I bet the writer thinks he’s making a statement about gay life. So many writers seem to be wanting to suck out the spark in order to be considered ‘meaningful’—it’s starting to feel a bit like writing for the literary establishment. I will nearly always steer clear of that. Don’t get me wrong: stories can be serious, stories can be literary, but that doesn’t mean that all heart and emotion has to be pulled out, and I look for anything that flies in the face of that, because stories—and poetry, and art—can be magical, and emotional, and shocking, and sad, and they can do all of them at once, and the same can be said of gay life.

I sense a little bit of well-crafted irreverence–a sly mixing of sincerity and irony. Would you say that this is the kind of work that speaks to you. 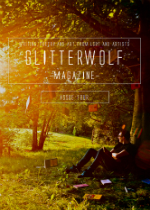 Absolutely. I like nothing more than literature gives you a bit of a nod and a wink. That’s what that feeling of ‘self-awareness’ in a story comes down to actually—that idea that whoever has crafted this knows what game they’re playing, knows you probably know it too, and so can tip the balance. The first three issues of Glitterwolf featured the poet Chris Black, who I think pretty much sums this aesthetic up. He can tip you from a cock joke to Shakespearean lyricism in a few lines, or he can use a cock joke to be incredibly sentimental and bring you to tears. I think that sort of thing appeals to me because, mostly, that’s actually what life is like, and a lot of literature seems concerned with bundling the experience into one narrow genre or style at once.

You are based in the United Kingdom and I am sure you get a lot of international submissions. What are some of the commonalities and differences you found in the global queer writing community? How is the work similar or different depending on the locale of the writer (i.e. London-based writers versus say Portland-based writers).

It’s fascinating, actually, because I so rarely pay attention to their origin as I’m writing, and it so rarely makes itself noticed. I think it probably says a lot about the “queer experience” that there is that much commonality. There’s a lot of the themes I think you’d expect, being felt and told as stories everywhere. The outsider. The links between “queer weird” and actual “fantastical weird.”  What I am starting to see turning up a lot is stories addressing the building of families, slotting together LGBT family units as things like gay marriage and family become more integral to our lives, and having to negotiate new versions of traditional ideas. But between the UK and US? Well… we seem to be a lot more scared of writing sex scenes in the UK, but that’s about it!

There has been a lot of talk over the last couple of years about what constitutes “queer” writing. Is it style? Is it content? I wanted to know your thoughts on what constitutes queer writing and how does that personal philosophy inform the work you publish in Glitterwolf?

My god… this is an answer that could go on and on.

Superficially, there’s your fiction that makes an effort to deal with, or give exposure to, gay characters, gay relationships, gay concerns, and there’s definitely a need for that, and always will be until the time that ‘queer fiction’ is just ‘fiction’, because it’s still often some way left of mainstream. But as I mentioned, Glitterwolf publishes fiction that isn’t superficially gay, and I think there is still a marked difference in those stories that, if you were wise, you could pick out as ‘queer fiction’ without knowing.

I think queer writers make excellent storytellers because we’re so used to observing the mechanics of people and second-guessing their actions and motivations, and you can see—or feel—that perspective of the outsider even when there isn’t a gay character in sight. And then, we also have speculative fiction stories that seems to gel incredibly well with LGBT characters. It’s the sense of finding something beautiful in what some see as weird and monstrous, I don’t think the monsters in the closet feel like a big step for queer readers.

Overall, though, it nearly always feel like queer writing is for itself, for the actual purpose of just creating something, unlike much ‘mainstream’ writing that can feel like it’s writing for the establishment, for respect, for status.

Glitterwolf looks spectacular. Can you tell me a little bit about what goes into the design of each issue?

Mostly simplicity and deadline panic…! I always just try and stick to ‘keep it simple’ in terms of design. It’s very kind of you to describe it as spectacular, and I think that mostly comes down to the strength of the photography that graces the cover and the interior, which is almost entirely out of my hands. Glitterwolf is lucky to have a talented photographer who lets me bully him, Thom Vollans, who for three issues running now has produced me some excellent cover photography that somehow seems to completely capture whatever I set him as a brief. I don’t know how he does it. The man’s the devil. The third issue (and collected edition) actually features myself, painted up as a skeleton, which despite the sunny look was photographed in the freezing cold. I wonder how many other lit mag editors can say they’ve suffered for their art quite like that?

What advice would you give anyone who is looking to start a literary journal?